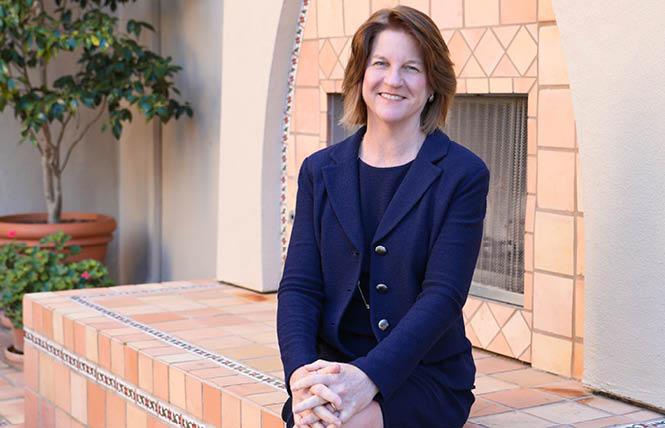 With two high-profile endorsements and a sizeable campaign war chest, lesbian San Mateo County supervisor candidate Laura Parmer-Lohan is starting 2022 in a strong position. The San Carlos city councilmember is vying to become the first out woman to serve on the county board, its lone LGBTQ member, and the first mother on it in recent memory.

She is one of four candidates who have pulled papers to seek the seat on the June 7 primary ballot. If no one captures more than 50% of the vote then the top two vote-getters will square off on the November ballot.

Supervisor Don Horsley is termed out of his District 3 seat on the board, which sprawls from the coastal towns along Highway 1 to the suburban cities of Atherton, San Carlos, and parts of Menlo Park and Belmont. He endorsed Parmer-Lohan at the end of January.

"I cannot think of a more qualified leader and public servant to serve the diverse needs of District 3 than Laura Parmer-Lohan," stated Horsley. "Laura offers fresh ideas and a bold vision for addressing the challenges facing our county and district, including wildfire prevention, drought, and sea level rise."

A few days later District 2 Supervisor Carole Groom also threw her support behind Parmer-Lohan. Like Horsley, Groom is also termed out this year.

"As a mother, small business owner, and transformative leader, Laura will bring a much-needed perspective to the board," stated Groom. "She understands the unique joys and challenges of working moms and family caregivers and the disproportionate toll that COVID-19 has taken on working moms and families."

Parmer-Lohan said she was proud and honored to have the backing of the two supervisors. Of Horsley in particular, she pledged "to continue his dedicated and impactful work on behalf of the people of District 3."

Elected in 2018 as the first out person on the San Carlos City Council, Parmer-Lohan started her own marketing and consulting firm and is now chief of staff for the biotech company Amgen at its location in South San Francisco. She is part of a rainbow family that includes her wife, Kathy Parmer-Lohan, executive director of the San Carlos Education Foundation, and their sons Bradley, now in college, and Gregory, a high school senior.

"There is much at stake for San Mateo County and our local communities in this election," stated Parmer-Lohan, 55, who served as her city's mayor last year. "Over the past year, I've engaged hundreds of residents to better understand their vision and priorities, which include protecting our clean air, water and open spaces and ensuring that we're fully prepared to address any emergency."

Other supervisor races
Parmer-Lohan is one of at least two lesbians expected to seek county supervisor seats in the Bay Area. Oakland City Councilmember At-Large Rebecca Kaplan has pulled papers to seek the District 3 seat on the Alameda County Board of Supervisors.

Last November, supervisor Wilma Chan was struck and killed by a vehicle while walking near her Alameda home. Her chief of staff, Dave Brown, was appointed to fill the vacancy and had said he would not seek the seat.

With many residents and community leaders in the East Bay calling for another Asian American to be elected to the seat, it is unclear what Kaplan's chances will be in the race. Were she and Parmer-Lohan to win their races, they would be the first out lesbians elected to a board of supervisors in a Bay Area county outside of San Francisco.

Their elections would triple the number of out county supervisors in the nine-county Bay Area region should gay San Francisco Supervisor Rafael Mandelman win reelection to his District 8 seat in the fall. To date, no serious opponent has announced plans to oppose him in the November election.

Gay Pleasant Hill City Councilmember Ken Carlson would double the number of out male Bay Area supervisors if he wins election to the District 4 seat on the Contra Costa County Board of Supervisors. The retired Concord police sergeant is vying to follow in the footsteps of his grandfather, who also served on the county board, and be its first out LGBTQ supervisor.

Parmer-Lohan would be the third out supervisor to serve on the San Mateo County Board of Supervisors. Tom Nolan was the first openly gay politician to hold elected office in a suburban part of the Bay Area when he won his seat on the county board in 1984.

Rich Gordon then became the county's second gay supervisor, serving for roughly 13 years until his election in 2010 to the state Assembly. Gordon was among those who early endorsed Parmer-Lohan last year, as did Ken Yeager, a gay man who was the first out supervisor in Santa Clara County.

Lesbian former San Francisco supervisor Roberta Achtenberg is also among Parmer-Lohan's endorsers. She also has the support of the LGBTQ Victory Fund; LPAC, which works to elect out women across the country; and the Bay Area Municipal Elections Committee, which aims to elect LGBTQ people to office on the Peninsula and in the South Bay.

Parmer-Lohan announced her supervisorial candidacy at the start of 2021. Also in the running are Menlo Park City Councilmember Ray Mueller, who has two children with his wife; Air Force veteran Steven Booker, a Black union leader and father who lives in Half Moon Bay; and San Mateo County Harbor District commissioner Virginia Chang-Kiraly, a married mother of two who lives in an unincorporated area of Menlo Park and helped found the San Mateo County API Caucus.

Of the quartet, Parmer-Lohan raised the second most amount of money for her campaign in 2021. According to her year-end financial disclosure report, she netted $122,042 last year and reported having nearly $130,000 in cash on hand.