Out in the World: Report: Afghan LGBTQ people remain in peril, governments urged to act 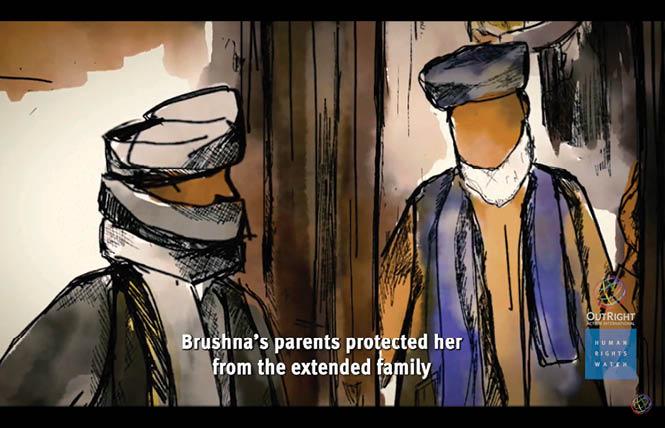 A new report by Human Rights Watch and OutRight Action International shows Afghan LGBTQ people remain at various stages of peril both within their own country and in neighboring countries. Governments around the world have been slow to act to protect them as the Taliban continues to deny LGBTQ Afghans their human rights, the report stated.

"The Taliban have explicitly said that they will not respect the rights of LGBT people," Heather Barr, HRW's associate director of the women's rights division, told reporters during a joint virtual January 25 news conference announcing the report's release.

Barr co-researched and co-authored the 43-page report, "'Even If You Go to the Skies, We'll Find You': LGBT People in Afghanistan After the Taliban Takeover," with J. Lester Feder, OutRight senior fellow - emergency research. The report was edited by Neela Ghoshal, OutRight's senior director of law, policy, and research, and Graeme Reid, HRW's director of LGBT rights.

The report documents LGBTQ Afghans' experiences since the Taliban took over last summer. It echoed previous media coverage of LGBTQ Afghans' in the Bay Area Reporter and other news outlets since Afghanistan's fall to the Taliban and withdrawal from the country by the U.S. and allies in August 2021.

Among the report's recommendations the researchers called upon the United Nations and governments, especially those involved in the 20-year war, to act by using every mechanism at their disposal to support LGBTQ Afghans and expedite their evacuation and resettlement.

Country not safe
Afghanistan wasn't a safe place for LGBTQ people before the Taliban recaptured the country. Same-sex relationships were criminalized in 1976 and again in 2018.

LGBTQ organizations didn't exist in Afghanistan. The few organizations that worked with LGBTQ Afghans on other issues, such as HIV/AIDS, evacuated from the country in August.

The Taliban's return to power turned the clock back two decades when the regime first ruled starting in 1996, despite Taliban leaders' protests in the media that it is a "new Taliban." The regime ushered in the return of strict Sharia law and adherence to the Taliban's Ministry of Vice and Virtue's manual. The manual mandates religious leaders prohibit same-sex relationships and turn in LGBTQ people to the government, according to the report.

"That's created an environment where anyone who wants to do harm to someone because of their sexual orientation or gender identity feel not only like they're not going to be punished if they do that, but they may be rewarded," Barr said.

Surviving
Some Afghan gay men have erased any trace of their gay lives, especially on social media, and taken on the appearance of the Taliban to survive.

Afghan queer rights activist Walid Muhammadi, who served as an independent research consultant for the report, did just that.

"I was terrified every minute I stayed there," Muhammadi told reporters during the news conference. Muhammadi described altering his appearance to blend in with the Taliban. Yet, he was still assaulted by a member of the Taliban.

"I was getting in a taxi one day when a Taliban member hit me for no reason," he said. He recalled being asked, "Don't you know how to walk like a man?"

Scared, Muhammadi became one of the very few who was evacuated from Kabul, the capital city. He is now safely in Europe.

Other Afghan LGBTQs reported things worse than what Muhammadi experienced. Most of the 60 LGBTQ Afghans who participated in the report are still living in Afghanistan, where they spoke to the researchers between October and December 2021.

The report's participants reported multiple abuses, such as blackmail, discrimination, forced marriages for both men and women, violence, monitoring, entrapment through social media, and more. Many reported being afraid to leave their homes since August 15, 2021, and were running out of food. The abuses were allegedly perpetrated by family, partners, community members, and members of the Taliban, according to the report.

Others reported losing their businesses, family, and community.

Some participants reported their former lovers supported or joined the Taliban to ensure their own safety.

"It's been possible to write this report because the situation is so incredibly difficult for people right now," Barr said. She added that the participants, mostly in their late teens and 20s, spoke with the researchers anonymously to protect their safety. "People were willing to share their stories," she said.

The researchers noted a lack of queer women and transgender men's voices in the report. This was due to less access to private spaces away from their families and the Taliban limiting women's mobility.

Only a few LGBTQ Afghans have been able to leave the country. A smaller number have crossed borders into neighboring countries. They wait in a dangerous limbo to be forcibly returned to Afghanistan or resettled in Canada, the United Kingdom, and other countries, according to the report.

Every LGBTQ Afghan is not going to get out of the country, the researchers said, pointing to family, economics, lack of proper documentation, and other factors.

Obligations
The report reminded all governments, including the Taliban, that they have an obligation to protect LGBTQ Afghans promptly and fairly no matter where they file their claim and to resettle those who want to leave.

U.S. congressional members and a coalition of LGBTQ international organizations have pressured President Joe Biden and his administration to act on behalf of LGBTQ Afghans.
The State Department defended the Biden administration stating, "This effort is of the utmost importance to the U.S. government," a State Department spokesperson said in a statement to the B.A.R. February 3.

"The United?States?recognizes that individuals targeted?on the basis of?their sexual orientation, gender identity or expression, or sex characteristics face heightened discrimination and violence in Afghanistan,?and in every country around the world," the spokesperson said. "They noted ongoing consultation with special envoy to advance human rights of LGBTQI+ persons, Jessica Stern, "to address the plight of LGBTQI+ Afghans and identify at-risk individuals since mid-August when the Taliban took over by force."

The spokesperson did not state there were any special or prioritizing of evacuation or resettlement programs for LGBTQ Afghans. They said the government is referring Afghans, including LGBTQ Afghans, who may be eligible to the U.S. Refugee Admissions Program.

Barr said the Afghanistan issue is one that is largely due to the actions of other countries.

"We have to keep saying that the events of the last five, six months in Afghanistan are not some kind of accident that happened," said Barr, stating it has been a "consequence of decisions made by countries" in the last 20 years "led, of course, by the United States."
"They own this disaster," Barr told reporters about the U.S.'s culpability.

The report called on the regime to adhere to Afghanistan's human rights legal obligations. It called for the end of abuses against LGBTQ Afghans, prosecution of perpetrators and protection of LGBTQ hate crime victims, and ensuring equal rights and support for LGBTQ people, among its recommendations.

"Some way has to be found to engage the Taliban about ending these abuses," against LGBTQ people, Feder told the B.A.R. in a phone interview February 1.

He admitted that the idea sounded "far-fetched," but he insisted the international community needs to be "clear in all engagement with the Taliban, that LGBT people are also entitled to human rights."

The report called on the U.N. and other countries to hold the Taliban accountable when international human rights laws are violated.

Gay Afghan American Nemat Sadat was angered by the report and its recommendations. The activist's own list of LGBTQ Afghans who need help has grown to 860.

"I am so infuriated by that report, it's unreal," Sadat told the B.A.R. He was incredulous that the researchers would recommend the U.N. and international community pressure the Taliban to protect LGBTQ people.

"Are you kidding me? How foolish are you? Are you trying to serve these people on a silver platter? The Taliban are never going to [respect LGBTQ people]," he said.

Feder realized that making Afghanistan an LGBTQ-friendly country under the Taliban is a long-term goal.

Taliban spokesman Zabihullah Mujahid did not respond to the B.A.R.'s request for comment.

The report also called on countries where some LGBTQ Afghans have fled to respect their rights under international law among other recommendations.

Hope
Feder expressed hope that the report will get governments to think about LGBTQ Afghans when engaging with the Taliban and to act on behalf of queer Afghans.

"Our hope is that all of those engagements [meetings at the U.N. and foreign engagement] that LGBT people are on the minds of diplomats, and that the pressure builds on the Taliban to respond," he said.

In the meantime, resettlement remains the most immediate and best solution for LGBTQ Afghans in the short term, Feder told the B.A.R.

"The things that are most in their control are evacuation and resettlement," he said.

Out in the World: Coalition delivers 10,500 signatures to Biden administration to protect LGBTQ Afghans
Sign up!