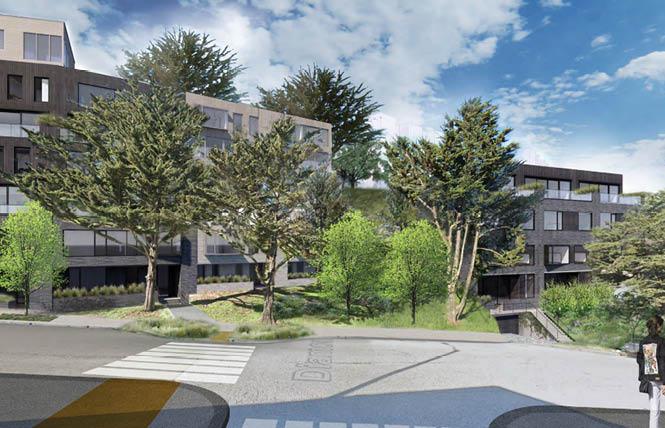 The San Francisco Planning Commission has approved 24 units of family housing in Diamond Heights that had generated much opposition from nearby residents. The project will also fund $3 million toward the construction of affordable housing elsewhere in the city.

The oversight body unanimously voted 7-0 at its February 3 meeting to support the market-rate development from On Diamond LLC, an affiliate of the San Francisco-based Emerald Fund. Planning staff had recommended that the commission approve the project set to transform a Diamond Heights hillside.

"Is 24 units good on a challenging site like this, I would suggest it is," said planning commission vice president Kathrin Moore.

It is the first sizeable family housing development to be built in that section of the city's eighth supervisorial district in years. The developer is purchasing the Diamond Heights site from the Cesar Chavez Foundation, which plans to use the proceeds to build its own below-market-rate housing projects in California.

Initially set to take place in the summer, the hearing had been delayed for months as developer Marc Babsin worked to strike a deal with neighborhood leaders who had objected to the housing, estimated to cost $2 million or more per unit, set to be built at the intersection of Diamond Heights Boulevard and Diamond Street. They reached a deal in early January, as the Bay Area Reporter was first to report, allowing for the project to be heard this month.

"We are very excited by this site," said Babsin, noting it is at the confluence of the Diamond Heights, Noe Valley and Glen Park neighborhoods.

Steve Chaffin, who lives across the street from project, was one of the three community leaders behind the group 1900 Diamond for All who mediated the compromise with Babsin. He urged approval for the project, noting, "We feel it is a very good outcome and the best given the political environment in our city and state."

In her report recommending approval for the project, planner Gabriela Pantoja noted it is near public transportation, commercial corridors, and jobs. She also noted it will be built "on a suitable development lot" while contributing to the city's affordable housing fund.

Rachael Tanner, president of the commission, said "without a doubt" the proposal was an improvement from the initial one submitted last year.

"I am really excited to see so much collaboration. I know it took a while to get here," she said.

It will consist of 14 residential buildings, 10 duplexes and four single-family residences. Some units will see a smaller number of bedrooms due to the changes Babsin agreed to make.

The homes will be pushed back from the sidewalk in order to preserve 10 Monterey cypress trees, and the number of driveways was cut from 15 to eight. A public staircase adjacent to a viewing deck will run the length of the hillside.

Babsin also agreed to fund various pedestrian improvements in the area, from new crosswalks and sidewalk bulb-outs to funds for ongoing maintenance of plantings in the street median.

Nearby residents had argued that the entire project should be affordable and voiced criticisms about its impact to the trees on site and views afforded by the hilly property. Backers of the project note it will produce badly needed housing with two or three bedrooms suitable for families with children.

Gay District 8 resident Jim Chappell, an urban planner and the former executive director and president of the urban planning think tank SPUR, congratulated Babsin and the community leaders behind the group 1900 Diamond for All in reaching a compromise that is a "win-win" for the neighborhood, developer and city.

"It takes a piece of very steep, leftover land and preserves its best features and creates homes in our neighborhood for 24 families and preserves open space," said Chappell, who had come out in support of the project in a B.A.R. guest opinion last August.

While 500 letters in opposition were sent in to the commission, just two people called in during the hearing to oppose the project. Both argued the site should be used solely for affordable housing.

"I urge you to oppose this luxury housing project," said Saralie Pennington. "It is a betrayal to the goal of meaningfully addressing the affordable housing crisis that afflicts afflicts this city and notably here in District 8."

Planning commissioner Theresa Imperial also expressed "disappointment" in not seeing affordable housing at the infill site. Nonetheless, she voted to support the project.

But Moore interjected that it is "almost impossible to do high-density affordable housing on this site," as it would require "completely disrupting" it and not allow for the preservation of the views or trees as the neighborhood groups demanded.

The commission's decision of support could be appealed to the Board of Supervisors. For that reason, gay District 8 Supervisor Rafael Mandelman has refrained from taking a stance on it, though his office was complimentary of the deal worked out between neighborhood leaders and Babsin.