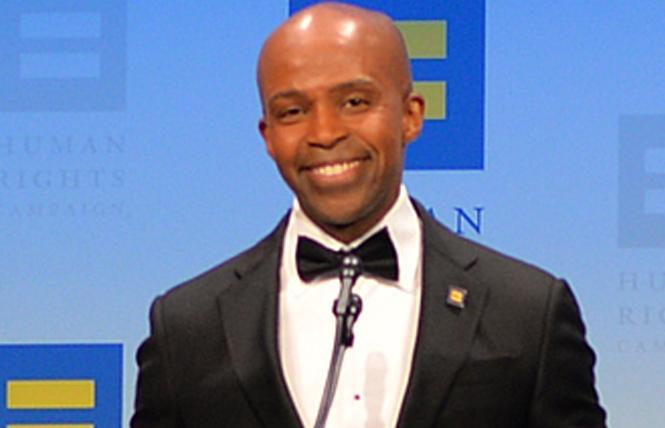 Alphonso David, who led the Human Rights Campaign for two years before he was terminated "for cause" September 6, has filed a lawsuit over his ouster. Photo: Michael Key/Washington Blade

Alphonso David, the former president of the washington, D.C.-based Human Rights Campaign terminated by the board after he was ensnared in the Governor Andrew Cuomo scandal, sued the nation's leading LGBTQ group February 3, arguing he was fired as a result of racial discrimination "amid a deserved reputation for unequal treatment of its non-white employees" and was explicitly told he was paid less because he's Black.

David, speaking with the Washington Blade on Thursday during a phone interview, said he came to the decision to file the lawsuit after practicing civil rights law for 20 years and "never thought that I would be a plaintiff."

"But I'm in this chair, I was put in this position," David said. "And as a civil rights lawyer, I couldn't look the other way. It would be anathema to who I am and it would undermine my integrity and purpose for the work that I do. And so I have to go through and make a very, very difficult personal decision to file this lawsuit."

The lawsuit, filed Thursday in the U.S. District Court for the Eastern District of New York, accuses HRC of violating new state and federal laws for terminating David, who was the organization's first person of color and Black person to helm the LGBTQ group in its 40-year history. The lawsuit also contends HRC contravened equal pay law in New York by paying David less than his predecessor, Chad Griffin.

After a public dispute with the board in September amid an independent investigation of his role in the Cuomo affair, the HRC boards unceremoniously fired David and shortly afterward announced a still ongoing search for a new president. David was named nearly a dozen times in the damning report by New York Attorney General Letitia James, suggesting David assisted in efforts by Cuomo's staff to discredit a woman alleging sexual misconduct in Cuomo's office. David has consistently denied wrongdoing. Cuomo resigned last August.

But the lawsuit is broader than the termination and describes an environment at HRC, which has faced criticism over the years for being geared toward white gay men, as a workplace where "non-white staffers were marginalized, tokenized, and denied advancement to high-level positions." After a speech David gave on issues of race and indifference in the context of HRC's mission, the lawsuit claims a board member complained about him referring too much to being Black, but faced no penalty from the organization.

Specifically named in the report is Chris Speron, senior vice president of development, who expressed concern about "alienating" white donors and specifically "white gay men" after David issued a statement on the importance of Black Lives Matter after the killing of George Floyd by Minneapolis police officers. The lawsuit claims Speron pushed David to "stop mentioning in his public statements and remove from his bio the fact that he was HRC's first Black president in its history." Speron also was critical of hiring a Black-owned consulting firm and "criticized a Black staff member for attending a meeting with the consulting firm without a white person present," the lawsuit claims. Speron couldn't immediately be reached for comment to respond to the allegations.

Equal pay claims
In terms of equal pay, the lawsuit says HRC's co-chairs informed David he was underpaid compared to his predecessor because he's Black. But the lawsuit also acknowledges in 2021, just before news broke about the Cuomo report, HRC in recognition of David's work renewed his contract for five additional years and gave him a 30% raise.

David, speaking with the Blade, said he was in "shock" upon experiencing these alleged incidents of racism, maintaining he had kept quiet at the time out of concern for the greater good of the aims of HRC.

Asked whether as president he considered implementing racial sensitivity trainings for his subordinates, David said "yes," but added many trainings aren't effective and said the power in organizations like HRC is often spread out.

"There are people within the organization that have a fair amount of board support because they bring in the money because they are responsible for overseeing the money," David added.

Joni Madison, interim president of HRC, said in a statement after the lawsuit was filed the organization is "disappointed that Alphonso David has chosen to take retaliatory action against the Human Rights Campaign for his termination which resulted from his own actions."

"Mr. David's complaint is riddled with untruths," Madison said. "We are confident through the legal process that it will be apparent that Mr. David's termination was based on clear violations of his contract and HRC's mission, and as president of HRC, he was treated fairly and equally."

Madison added the individuals accused of racism in the lawsuit "are people of color and champions of racial equity and inclusion who provided support and guidance as Mr. David led the organization," without naming any specific individual. The boards for the Human Rights Campaign and the Human Rights Campaign Foundation who made the decision to terminate David, were comprised of seven independent directors, five of whom were Black.

The racist environment, the lawsuit says, culminated for David in September 2021 amid an independent investigation of his role in the Cuomo affair conducted by the law firm Sidley Austin LLP at the behest of the organization. According to the lawsuit, the board co-chairs contacted David late at night before Labor Day weekend to tell him to resign by 8 a.m. the next morning or be terminated for cause. When David asked whether the Sidley Austin investigation had made any findings against him, or if a report would be issued explaining what he was accused of doing wrong, the board co-chairs refused to say, the lawsuit says.

As is publicly known, David declined to resign and took to Twitter to complain about the board, which subsequently issued a statement disputing his claims. He was then fired "for cause" under his contract.

The termination, the lawsuit says, signified differential treatment of David because he is Black, taking note HRC under his predecessor had "endured repeated, serious, scandals — many of which involved HRC's mistreatment of Black and other marginalized individuals," but Griffin was never terminated "for cause."

Both the Human Rights Campaign Foundation board and the HRC board voted to terminate David. A source familiar with the vote said no one voted "no" in either case. The campaign board vote was unanimous and there were two abstentions in the foundation board vote, the source said.

The source familiar with the vote said David never told HRC he was helping Cuomo during his time as HRC president nor did he disclose he was talking to the New York attorney general. The first board members heard about it was when it hit the press, the source said.

Meanwhile, the lawsuit says David "performed extremely well as HRC president, by any measure," navigating the organization through the coronavirus pandemic and boosting fundraising by 60%. (The Blade has not yet verified this claim.) It should be noted that HRC cited coronavirus as the reason it laid off 22 employees, as reported at the time by the Blade.

David, asked by the Blade how he sees the alleged racist culture at HRC infused in his termination, said "Black and Brown people are treated differently and have been for years in this organization," citing a "Pipeline Report" leaked to the press in 2015 documenting an environment in which employees of color were unable to thrive.

"And so, the fact that I'm being treated differently now, in the fact that a different standard is being applied to me is just simply consistent with what they've always done," David said. "You know, we go back to the Pipeline Report: Imagine if I was leading the organization at the time, and there was a report that was issued, that said that anti-Semitic remarks were being made within the organization, and that women were being discriminated against within the organization or some other marginalized group and that one of the senior vice presidents used a derogatory remark. Do you think I would still be at the organization or would they have fired me?"

David concluded: "There's a different standard and a double standard that they've applied for decades, and I've just now been one casualty — another in a long series of casualties based on their systemic bias and discrimination."

Among the requests in the prayer for relief in the complaint is a declaration HRC's actions violated the law; restoration of David to his position as president; an award of the compensation he would have received were he still on the job as well as punitive damages. Asked by the Blade whether any settlement talks have taken place, David said that wasn't the case and pointed out the lawsuit was recently filed.

Legal experts who spoke to the Blade have doubted the validity of a review by Sidley Austin on the basis it was among the legal firms agreeing in 2019 to help with HRC entering into litigation to advance LGBTQ rights, an agreement David spearheaded upon taking the helm of the organization.

David, in response to a question from the Blade, said the independent investigation into his role in the Cuomo affair "is a sham and I believe it was a sham," citing the lack of transparency of findings.

"One of the first instances that caused me concern," David said, "is I suggested to the organization that we conduct an independent review, and they came back to me and said, 'Here's our press release history,' and the press release never mentioned that I actually suggested that they do this review. And when I challenged them on that, they told me that they thought it would be better for the press to review a complaint or receive a statement that showed that they were bringing this investigation as opposed to I'm recommending and push back even more. And then they said 'Well, we will put in the statement that you are cooperating.' So from the very beginning, they were not honest about what they were actually doing."

Representing David in the lawsuit is the Chicago-based employment law firm Stowell & Friedman, Ltd. and Chicago-based attorney Matt Singer. The case has been assigned to U.S. District Judge Eric Vitaliano, a George W. Bush appointee, an informed source familiar with the case said.