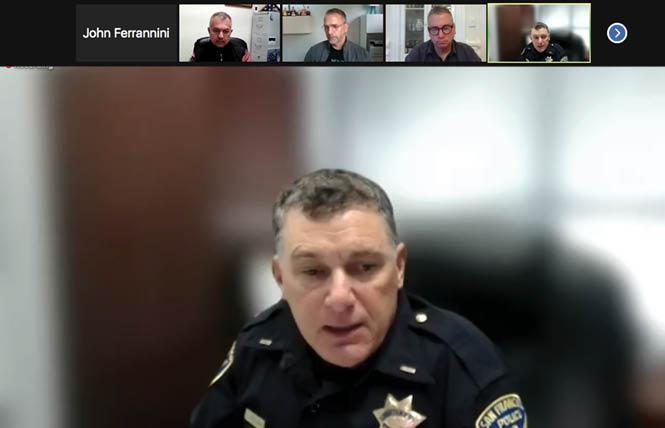 Castro merchants were told at their meeting February 3 that the acting captain at the San Francisco Police Department's Mission Station has been promoted to the permanent position and that the old Pottery Barn store is unlikely to be the site of an LGBTQ museum.

"As you can imagine, the unhoused are the biggest issue I hear about in the Castro," McEachern said, adding he dispatched officers to 18th and Hartford streets Thursday morning to make contact with some folks. "We are trying to deal with that. We are dealing with that. I've sent my officers there a couple of times. I have no problem asking people to move from the Muni tracks and the Muni tunnel."

McEachern said that he has gotten multiple calls about the Pink Triangle Park kitty corner to Jane Warner Plaza. The park memorializes LGBTQ people killed by the Nazis during World War II

"Bear with us," McEachern said. "We are trying to stay on top of these things, but sometimes they pop up faster than we can get to."

McEachern said that the retirement of Cody Clements of the San Francisco Patrol Special Police may be why, as Mandelman said earlier in the meeting, it "seems" like there have been more unhoused people in the Castro in recent weeks. Dave Karraker, a gay man who is on the merchants' board, wondered whether it was Mayor London Breed's law enforcement initiatives in the Tenderloin.

"I'm kind of wondering if some of the unhoused homeless activity is stuff that the patrol special was handling and you notice now that he's gone," McEachern said. "I know Cody pretty well, I try to speak to him every couple of weeks, and I'd like to get a patrol special up there because I think we don't really know the depth of what he was doing up there."

McEachern said that through the SFPD's website, people can access a community session with him on the last Tuesday of each month.

Mission Station is also the home of gay Captain Christopher Del Gandio, who last month was assigned to oversee SFPD' Community Engagement Division that is housed there.

LGBTQ museum update
Mandelman also said that it looks unlikely the old Pottery Barn building will be an LGBTQ history museum, though Breed still has hopes. She had earmarked $12 million in the city's current fiscal year budget toward purchasing a site to house a new, larger facility for the GLBT Historical Society, which operates a jewel-box of a museum in a leased storefront on 18th Street.

"The mayor and I both believe — and lots of other folks think — that Pottery Barn would be a fantastic queer culture history space," Mandelman said. "One nonprofit or multiple nonprofits could go in there and right there at the intersection of Castro and Market. It could be a tremendous draw for tourists. ... She's still set on this particular spot. I'm not sure we're gonna get it."

Mandelman added that this is because of a perennial problem in the Castro.

"This property owner does not seem to be interested in selling anything close to a reasonable price, and that is a problem with capitalism, and a problem we're seeing in the Castro is a handful of property owners who are willing to leave their spaces vacant, don't seem to be interested in selling, and it creates these dead spaces throughout the neighborhood," he said.

Karraker said that the merchants can start a picket.

He also announced that the merchants will elect a new board in April, and that at the March meeting people can submit their intentions to run.