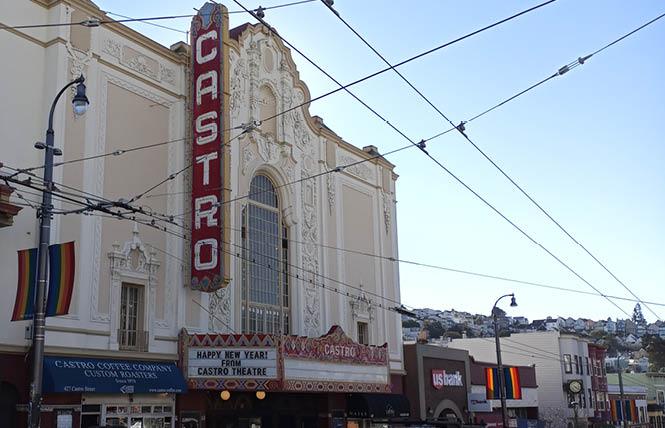 The new management of the Castro Theatre pledged to area merchants that it would be a good neighbor. Photo: Scott Wazlowski

Changes to the management at the Castro Theatre took center stage at the Castro Merchants Association's first meeting of the year February 3, with neighborhood leaders asking Another Planet Entertainment to be proactive in reaching out to them.

The announcement in the San Francisco Chronicle January 19 that the Castro Theatre would be turned into a live music venue caught many neighborhood stakeholders off guard. Later that day, new manager Another Planet Entertainment told the Bay Area Reporter that the theater would still be screening films, too, when it rolls out its programming in 2023.

Mary Conde, senior vice president of Another Planet Entertainment, apologized to the merchants during the Zoom meeting for the haphazard way the changes were announced.

"I do understand that there was a bit of a fumble. I will acknowledge that," she said. "There were some mitigating circumstances I can't really go into, but we were rushed to make this announcement and we were in the position where we had to make the announcement in a couple of days and I apologize for that. We did come out of the gate a little clumsy."

The reaction to the changes at the theater in the meeting ranged from optimism to deep concern, but all the speakers were united on the need for Another Planet Entertainment to be communicative.

Dave Karraker, a gay man who is on the merchants' board, perhaps best summed up the feeling in the (virtual) room.

"The Castro is a very special neighborhood and it has loud, influential voices that rise up," Karraker said. "Just ask us about any other controversy ... I think everyone's very excited that foot traffic is gonna come in to the neighborhood, but pay close attention: this is not like any district you've ever worked with."

Karraker told Conde that in addition to communicating plans about live acts that may impact transportation and use of space to city agencies, Another Planet Entertainment has to be proactive in reaching out to neighborhood leaders to find out what's going on in the community at any given time. He also urged them to be transparent.

"If you do that, you'll be successful beyond your wildest imagination," Karraker said. "If you don't, you'll be shut down faster than ... well, cancel culture started in the Castro."

"Another Planet has met with me and I've appreciated their commitment to hearing from the community," Mandelman said. "My sense is they are drinking from a fire hose and I'm not sure they have all the answers yet but they'll do well if they keep talking to everybody and we can follow their progress."

Questions have also arisen over the longevity of the theater's beloved live organ performances before its screenings and events. Longtime organist David Hegarty had told SFGate in January that the new organ will be installed as planned.

But Another Planet Entertainment wouldn't commit to keeping the organ when it met with Mandelman, according to a trove of texts and documents obtained from his office by gay City Hall watchdog Michael Petrelis, who helped organize a protest in front of the theater over the new management's plans.

According to talking points created by Mandelman's staff, Another Planet officials "made it clear that they're hearing a lot about how much it means to the community, and I have a very hard time imagining a scenario where they are able to get community buy-in without committing to keeping the new organ."

The document also stated that once the new management team and community are "on the same page" about theater's future usage, the plan is for it to be closed "at least six months for renovations" and with a potential grand reopening during Pride Month in June 2023.

Stephen Torres, who sits on the Castro LGBTQ Cultural District board, had pointed questions for Conde at the merchants meeting. As the B.A.R. previously reported, the district had given a list of demands to Another Planet Entertainment and is in the process of meeting with them.

Stephen Torres, who sits on the Castro LGBTQ Cultural District board, had pointed questions for Conde at the merchants meeting. As the B.A.R. previously reported, the district had given a list of demands to Another Planet Entertainment and is in the process of meeting with them.

Torres noted that there has been gentrification near Alamo Square since Another Planet Entertainment took over the Independent live music venue there, and wanted to express that he didn't want that happening to currently-operating businesses in the Castro.

Torres also brought up still simmering resentment from neighborhood businesses over the lack of communication over "The Matrix Resurrections" U.S. premiere at the theater in December, as the B.A.R. reported. (The premiere was not part of Another Planet Entertainment's programming.)

"It was great they chose to have it at the Castro and to highlight this venerable institution within our city. It caused a lot of headaches for businesses on the corridor," Torres said. "If it's live acts moving in, sometimes this can take several hours, how will you make sure the businesses are not obstructed?"

Torres also wanted Another Planet Entertainment to assure the community that it wouldn't hog street access on big weekends, such as those around the Pride parade, and the Castro and Folsom street fairs.

Conde expressed frustration that Another Planet Entertainment has to answer for the failures of "The Matrix" premiere.

"'The Matrix' premiere didn't do any live venue producers any favors," Conde said. "If for some reason we need to close the sidewalk we will go to [San Francisco Public Works] and get a permit. We are well versed in permit issues in San Francisco. Regarding the festivals that happen on the street, [the San Francisco Municipal Transportation Agency] has a really great process in place. ... We'll work with community groups and festival organizers to make sure things happen."

Conde said that the Pride festival takes place adjacent to the Bill Graham Civic Auditorium, which is used during that time to store equipment needed for the event.

"We will have that relationship with other festivals moving forward," she said. "We have a sincere desire to be good neighbors."

Talks between the cultural district and Another Planet Entertainment will continue Friday.

Updated, 2/8/22: This article has been updated with APE statements obtained through a records request with Supervisor Rafael Mandelman's office by gay activist Michael Petrelis.