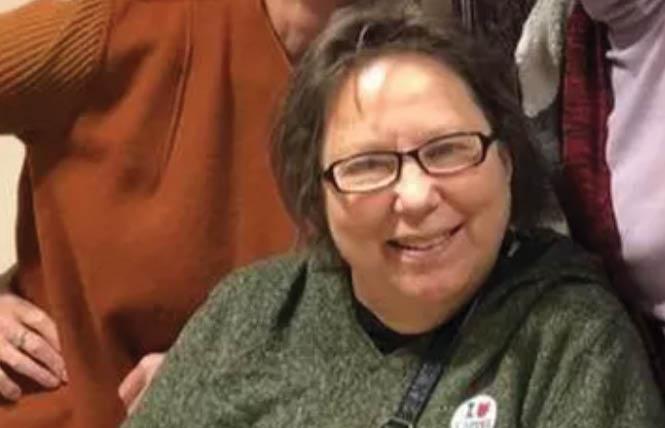 Ms. Corsaro, a lesbian, had recently moved back to San Francisco after a decade in Ohio, where she suffered a series of debilitating medical issues that left her in a wheelchair and on oxygen.

According to a GoFundMe campaign, Ms. Corsaro's medical issues began in in 2012. That year, Ms. Corsaro was hired by the Obama campaign to work on his reelection; the campaign sent her to Cincinnati. "At the end of the successful campaign, Kim had an accident that landed her in the hospital. She was given a powerful antibiotic, which shut down her kidneys. Doctors informed her that her kidneys would come back, so she moved to live in the country in Southeast Ohio, in the Appalachians, to recuperate," the fundraising page states.

"Unfortunately, her kidneys did not come back. Instead, within a few months they declined to 5% function, and the doctors told her she would need a kidney transplant. She found herself in a period of constant illness, going in and out of the hospital," the page states.

She stayed in Ohio until just recently, when she was able to move back to San Francisco. In Facebook posts last week, Ms. Corsaro wrote that her items had arrived from Ohio and she sought help unpacking boxes.

In a recent interview with this reporter, Ms. Corsaro said that she was suffering from kidney failure and had been on dialysis three times a week for several years. She had hoped she'd get a kidney transplant "before my time runs out," she said.

Ousting a police chief
The Bay Times was founded in 1978 by gay men and lesbians together. Ms. Corsaro took the helm of the paper in 1981. During her tenure, the paper was best known for a controversial cover in 1992 featuring then-San Francisco police Chief Richard Hongisto that was critical of the department for mass arrests of people peacefully protesting the Rodney King verdict. The paper ran a graphic of Hongisto with a police baton between his legs, like a phallus. The headline read "Dick's Cool New Tool: Martial Law," as Joe Fitzgerald Rodriguez recounted in a 2018 San Francisco Examiner article on the occasion of the paper's 40th anniversary.

"After allegations exploded that Hongisto tried to suppress the paper, the chief was subsequently fired by a unanimous decision of the San Francisco Police Commission," Rodriguez wrote.

Ms. Corsaro sued the city over the incident and a jury ruled in her favor.

"The Federal District Court jury awarded $5,600 to the paper, the Bay Times, for economic losses and $30,000 to its editor and publisher for emotional distress," the New York Times reported in a 1994 article. The jury also said the City of San Francisco must pay all the damages as well as both sides' legal fees, which have been estimated by lawyers at $500,000."

Gay District 8 Supervisor Rafael Mandelman paid tribute to Ms. Corsaro in a Facebook post, where he wrote that the Board of Supervisors adjourned its February 1 meeting in her memory.

This article has been updated.