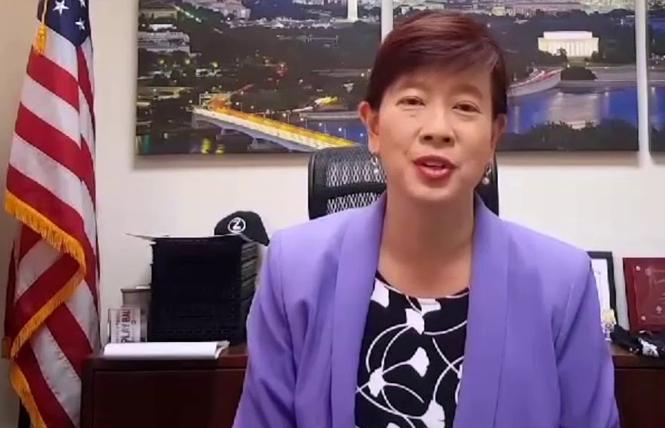 Fremont Mayor Lily Mei, a candidate for state Senate, has been labeled as anti-LGBTQ by the Alameda County Democratic Party. Photo: Courtesy YouTube

The first indication of the hurdles Fremont Mayor Lily Mei is likely to face as she campaigns for an East Bay state Senate seat this year came in January. Her name didn't appear on the Tri-City Democratic Club's endorsement ballot in the race for the open 10th Senate District seat.

It followed Mei being the first person deemed anti-LGBTQIA+ by the Alameda County Democratic Party last fall. It means she is no longer eligible to be backed by the local party, while other elected officials and community leaders could face repercussions from the party's central committee if they personally support Mei.

The local party left for further debate what would happen if a Democratic club chartered by it endorses her candidacy. Yet, it appears to already be a factor as clubs begin making endorsements in the contest to succeed termed out Senator Bob Wieckowski (D-Fremont).

In his January 28 East Bay Insiders newsletter, Steven Tavares wrote that Mei wasn't invited by the Tri-City club to take part in its endorsement vote due to the central committee's action. Her supporters in the club could only vote for a no endorsement, which Tavares noted enough did to thwart Hayward City Councilmember Aisha Wahab from reaching the threshold needed for the Tri-City Dems' backing.

This month, Democrats in the Senate district will cast votes for a pre-endorsement in the race by the state Democratic Party that would be finalized at its convention this spring. Mei's anti-LGBTQ tag is sure to factor into the outcome.

"I think people are taking the committee action seriously," said Andy Kelley, a gay man who is corresponding secretary of the Alameda Democratic party. "Folks don't want to be on the other side of the Democratic Party."

Formerly an independent, Mei registered as a Democrat when she ran for reelection as mayor in 2020. Among her transgressions cited by the local party's committee members were several actions Mei took over a decade ago while on the Fremont school board.

Among them was initially voting against marking Harvey Milk Day in honor of the assassinated gay San Francisco supervisor and not supporting queer authors on an AP English curriculum. As the B.A.R. has previously noted, Mei countered that she never voted to ban any LGBTQ books from being made available to Fremont students and explained that she wanted to honor more local civil rights figures than just Milk on the school calendar, which the school board ultimately did.

As mayor, she pointed to her hiring LGBTQ people for prominent positions and appointments of out members to oversight bodies. Mei also joined a nationwide group for mayors supportive of LGBTQ rights.

"Hopefully, my actions speak louder than this judgment," said Mei, one of five Asian American female mayors leading one of the country's 100 largest cities.

Attempting to move on
With little recourse for undoing the central committee's decision about her, Mei is attempting to move past it. She brought on as a campaign consultant Kate Maeder, a bisexual woman and partner at KMM Strategies who serves on the boards of Equality California and the LGBTQ Victory Fund.

"I personally never would work with somebody who is homophobic, full stop," Maeder, who is married to a woman, told the Bay Area Reporter. "She is not homophobic, and there is a lot of politics at play here, as you are aware, in Alameda County."

In the fall, Mei signed on to EQCA's candidate pledge to eschew donations from the tobacco industry, while Wahab is not listed LINK: https://www.eqca.org/kickbigtobaccoout/ among those who have done so. The statewide LGBTQ group has yet to issue an endorsement in the Senate race.

Speaking to the B.A.R. via Zoom late last year, Mei said she intended to continue to seek endorsements from various groups, including the state Democratic Party.

"Over the years I have sought many endorsements and not gotten some and gotten some too," she said. "My willingness to be there to answer questions and have a dialogue even if I don't get endorsed is important."

She had started off by noting her city was in the midst of observing United Against Hate Week. She recounted her childhood in a suburb outside Philadelphia where she was the only Chinese student in her class. (Her parents had left Taiwan for Canada, then moved to the U.S.)

"We were the only Asian family. It was not always the easiest at times," said Mei, now a mother of two young adults. "I, unfortunately, first hand as a kid experienced a tremendous amount of bullying and targeting."

Her classmates stuck her in her locker, she recounted, while her parents' car tires were blown out and the windows shot. She faced questions about why her skin was "yellowish" and her eyes were "slanted," said Mei, who found refuge in the office of a Black guidance counselor.

"As a child I was wondering why does everyone hate you only for the color of your skin? That's why it saddens me greatly people think I don't support every community," said Mei. "I think people should be treated well and respected. It breaks my heart when they don't."

She then began to repeat the defense she had mounted before the central committee in trying to refute the charge that she is against LGBTQ rights. Thinking back about the heated school board meetings, Mei said it reminded her of the hatred she faced as a child.

"You don't want people to think I am not an ally or hurt anyone with my vote or decision, that's not my intention," she said. "My intention is to be more inclusive, not less."

Questions over apology
During the central committee's deliberations, a number of the members expressed disappointment with Mei for not issuing an apology for the hurt her votes had caused, particularly for LGBTQ youth at the hearings, regardless of the reasoning behind her decision. Asked about the omission of an apology, Mei told the B.A.R. she thought she had done so.

"I understand that. I think I did apologize," said Mei. "I do remember apologizing. I am sorry for any hate people felt I represented."

The B.A.R. had covered the meeting and did not hear Mei apologize during it. Asked if her doing so would have resulted in a different outcome, Kelley told the B.A.R. it would likely have come too late in the eyes of most committee members.

"I think if anyone believed she was so genuinely sorry, the charges would never have been filed," he said. "She has tried to center herself as a victim without acknowledging the harm she has done to the LGBTQ community."

At another point during her interview with the B.A.R., Mei reiterated, "I am sorry if I hurt anyone's feelings for my vote. It breaks my heart."

She also said she had asked if she could speak again prior to the vote in hopes of saying she was sorry, but was told she could not. The reason, as Kelley explained to the B.A.R., was only members of the central committee could speak during that portion of the meeting. Mei does not serve on it.

"She was definitely provided minute-by-minute how that portion of the meeting was going to run," he said, adding by that point, "she knew her time was up."

So far no disciplinary actions have been taken against any of Mei's endorsers of her 2022 bid, who include Congressmember Ro Khanna (D-San Jose) and Fremont City Councilmembers Rick Jones and Raj Salwan. It is possible they could be deemed ineligible to be endorsed by the Alameda County Democratic Central Committee in their own campaigns, as Salwan is is now fighting an effort to remove him from the committee for his support of Mei at its meeting tonight (Wednesday, February 2).

Bisexual Assemblymember Alex Lee (D-San Jose), who represents parts of southern Alameda County and thus sits on the central committee, had voted in support of censuring Mei. He is supporting Wahab for the Senate seat, while she is backing his reelection bid this year.

He told the B.A.R. he would support seeing the Democratic Party in Santa Clara County adopt a similar policy to admonish elected leaders in the South Bay who oppose LGBTQ rights.

"The party formally censuring someone who doesn't share those values, especially core principles, I do think it is appropriate," said Lee, adding that he felt the evidence was there to warrant the action taken against Mei. "I think the party or central committee should have some accountability mechanism based on values."

As for Mei, she expressed disappointment in the central committee members who approved the resolution saying she is anti-LGBTQ. She noted she had appointed a number of them to various commissions and endorsed others over the years, while she had earned their endorsements in her past races.

"What is interesting for me is some people didn't think it was a problem. They had been working with me for years," said Mei. "They know this to not be true."

UPDATED 2/2/22 to include Raj Salwan fighting his being censured by the committee at its February 2 meeting.