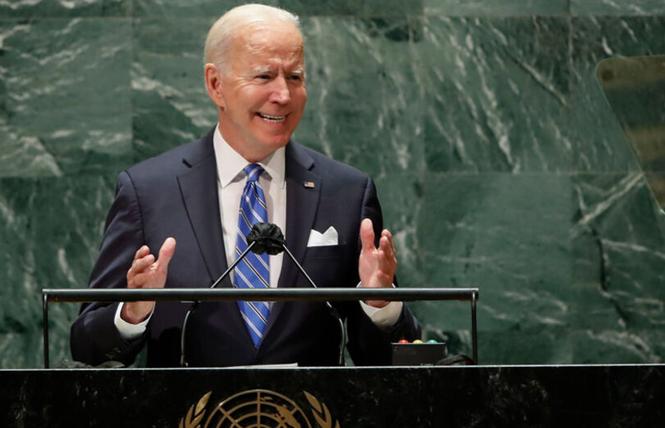 President Joe Biden called out anti-LGBTQ nations as he laid out the United States' vision for the future at the United Nations General Assembly. His remarks drew some anger and criticism.

"We all must defend the rights of LGBTQI individuals so they can live and love openly without fear, whether it's Chechnya or Cameroon or anywhere," Biden said during his September 21 address to the gathering of world leaders, which was held in-person with a virtual component.

LGBTQ communities in the two countries have experienced ongoing attacks.

Transgender people are criminalized in 13 countries and 47 United Nations member states do not allow for legal name and gender marker changes, according to the Trans Legal Mapping Report that was published in 2020 by IGLA World, the International Lesbian, Gay, Bisexual, Trans, and Intersex Association.

To win allies back and put opponents on notice after four years of the Donald Trump presidency, Biden laid out a list of actions his administration has taken during its first eight months in office. One of those is the U.S. rejoining a U.N. council from which Trump withdrew.

"We're running to retake a seat on the Human Rights Council next year at the U.N.," Biden said.

"I can only invite him to our republic so that he can see with his own eyes that there are no roosters in the Chechen Republic," said Kadyrov. "Rooster" is Russian slang referring to gay men. The term is used in prisons for inmates who have been sexually abused.

Kadyrov was not the only one who criticized Biden's speech. The Log Cabin Republicans swiftly issued a statement chastising Biden's comments.

LCR President Charles Moran alleged that Biden didn't use his platform to specifically promote the decriminalization of homosexuality, which Trump did, calling his speech disappointing and lacking in courage.

"Sadly, President Biden addressed the U.N. today and tragically failed to mention the decriminalization campaign at all," Moran stated. "President Biden could have created an uncomfortable moment for those countries in attendance who criminalize us; instead, he prioritized applause over principle, which helps no one."

Moran did not mention that Trump's championing of decriminalization of homosexuality in 2019, led by gay former U.S. Ambassador to Germany Richard Grenell, lacked much action. He also did not mention the Trump administration's rollback of LGBTQ rights in the U.S.

Decriminalization is one of the White House's five global LGBTQ rights priorities. The issue was front and center at the U.N. LGBTI Core Group's UNGA side event September 22 attended by U.S. Ambassador to the U.N. Linda Thomas-Greenfield. The U.S. is one of 35 countries that are members of the Core Group.

The event focused on decriminalization of homosexuality and transgender people and repealing laws that specifically target them, reported the Washington Blade.

"For millions of people it is illegal for them to be who they are, to love who they love. We need to repeal and eliminate these laws," Thomas-Greenfield said, according to the Blade article. "For our part, the United States is using our diplomacy, our foreign assistance and every tool we have to protect human rights, empower civil society and support local LGBTQI movements."

"Decriminalization is a very basic demand," said Sjödin. "Given how many countries have these laws on the books, it is still a priority."

Moran also did not mention former OutRight Executive Director Jessica Stern being nominated by Biden as the US Special Envoy to Advance the Human Rights of LGBTQI+ Persons [LINK: https://www.ebar.com/news/latest_news//306374]. The position was left vacant by the Trump administration.

Not off the hook
Biden and Secretary of State Antony Blinken have come under fire by activists and members of Congress about LGBTQ asylum seekers and refugees and queer Afghans stuck behind Taliban lines in Afghanistan since the U.S.'s August 30 exit from the country.

Blinken thanked Cicilline for "rightfully putting the spotlight on concerns about the LGBTQI+ community in Afghanistan," acknowledging the particular threat that they find themselves under, but he had not seen the plan. He said he would look into it.

The B.A.R. previously reported there are an estimated 1,000 LGBTQ Afghans working with activists, like gay Afghan American novelist Nemat Sadat, and organizations, like Immigration Equality and the Rainbow Railroad.

Gay State Department spokesman Ned Price reiterated the White House's five key objectives for working with the Taliban, three of which focus on human rights and humanitarian aid during a September 24 press briefing.

"We stand with the Afghan people, especially with women, children, journalists, human rights defenders, persons with disabilities, members of the LGBTQ community, and members of minority groups, and demand that the Taliban immediately cease any such atrocious abuses," Price stated. "The world is watching. The international community is watching very closely. And together we have consistently emphasized the importance of respect for human rights and fundamental freedoms for any future government in Afghanistan."

A State Department senior official did not specifically mention its efforts on behalf of LGBTQ Afghans during an August 27 briefing about the department's ongoing efforts to facilitate Americans, permanent residents, and other priority groups of Afghans getting out of Afghanistan.

American Cameroonian virologist tapped for PEPFAR
Biden announced this week his intention to nominate the first person of African origin to oversee the U.S.'s largest global initiative for HIV/AIDS.

If confirmed by the Senate, Nkengasong will be responsible for leading and managing PEPFAR, the largest HIV/AIDS program spearheaded by a single nation.

Currently, Nkengasong is the director of the Africa Centers for Disease Control and Prevention in Addis Ababa, Ethiopia, and has served as one of the World Health Organization director general's special envoys for COVID-19 since 2020.

Nkengasong has held many leadership roles in public health focused on HIV/AIDS, including at the Centers for Disease Control and Prevention, where he served as acting deputy director at the Center for Global Health, and chief of the International Laboratory Branch, Division of Global HIV/AIDS and Tuberculosis and co-chair of the PEPFAR's Laboratory Technical Working Group, among other positions.

The New York Times reported that Ganserer was forced to use her birth name on the ballot because she refused to submit a medical certificate to legally change her name and gender identity. The requirement is part of the 40-year-old German Transsexuality Law. The certificates cost hundreds of thousands of dollars.

Slawik called the win "Madness!" in an Instagram post. "I still can't quite believe it, but with this historic election result I will definitely be a member of the next Bundestag."

Ganserer told Reuters, "It is a historic victory for the Greens, but also for the trans-emancipatory movement and for the entire queer community."

Germany has incrementally been modernizing its LGBTQ laws. This year, it banned surgery on intersex babies. In 2020, Germany partially banned conversion therapy, a practice that attempts to change an individual's sexual orientation or gender identity. In 2018, Germany adopted a third gender option on birth certificates and identification documents. In 2017, the European country legalized same-sex marriage and adoption by gay parents.

The "Marriage for All" referendum, backed by Switzerland's parliament and the governing Federal Council, passed with 64.1% of the vote September 26, reported the Associated Press.

Justice Minister Karin Keller-Sutter, who sits on the Federal Council, tweeted that the government will implement the decision swiftly. The new rules could take effect by July 1.

The law legally puts same-sex couples on the same level as opposite-sex couples granting them adoption rights, facilitating citizenship for spouses, and allowing lesbian couples to access sperm donation banks, reported the AP. Civil partnerships have been legal since 2007.

Opponents argued their campaign was somewhat successful in raising the issue of assisted and reproductive technology.

"This is a historic day for us and for Switzerland, this is a great step forward, something we have been waiting for for years," Laura Russo, co-president of the Geneva Federation of LGBT Associations, told the AP at a celebration.

It was an eight-year battle for Swiss marriage equality advocates, she noted. They started pushing for same-sex marriage in 2013.

Out in the World: Leaders of Israeli queer youth agency visit San Francisco
Sign up!