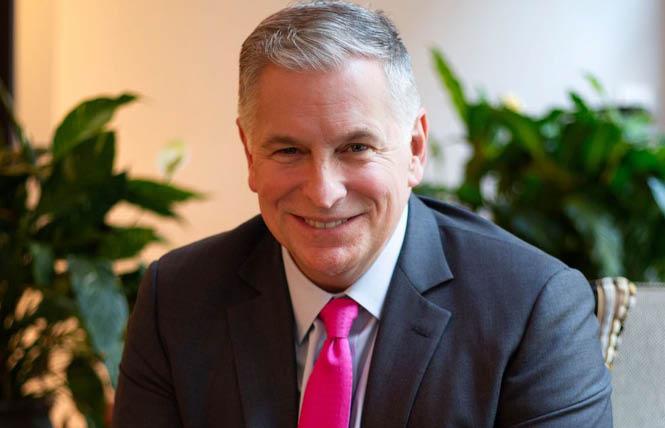 As the COVID-19 pandemic has frozen the kinds of fundraisers that groups like the Lambda Legal Defense and Education Fund need to raise money, the LGBTQ legal organization has announced a weeklong virtual conference as part of its efforts to raise $5 million.

ONE Lambda Legal events can be viewed at the website from October 4-8 after signing up. Most events are free to view. The first starts at 8 a.m. Pacific Time October 4, but each day has a celebration event beginning at 5 p.m. Pacific.

"We at Lambda Legal could not be more excited for our weeklong celebration, ONE Lambda Legal ... which is the culmination of a year-long effort to leverage the tremendous energy of our donors and volunteers to meet an ambitious $5 million target," gay Lambda Legal CEO Kevin Jennings stated to the Bay Area Reporter. "With the shift of the Supreme Court to the right, we are more grateful than ever to the donors and volunteers who have helped us secure the resources we need to protect the gains we have made and finish the fight for LGBTQ+ equality in the midst of a global pandemic that has required us constantly to innovate and collaborate to find new ways to reach our fundraising targets.

"ONE Lambda Legal Week — and its exciting mix of panels, speeches, entertainment, and other social programming — is both a celebration of our work and a call to further action and support," Jennings concluded.

Before taking the helm of Lambda Legal, Jennings served as an assistant secretary of education in the Obama administration. After that, he led the Arcus Foundation, a group for LGBT rights organizations, for five years. Before joining the Obama administration, he was the longtime executive director of Gay Lesbian Straight Education Network, or GLSEN.

These nightly celebrations will typically be one hour, Stevens said.

Abel Martinez of Lambda Legal told the B.A.R. that "we are primarily hosting live events with some events being pre-recorded, such as our lunchtime podcasts."

"ONE Lambda is Lambda Legal's response to COVID," Stevens explained. "The need for Lambda's work hasn't gone away, but the ability to have in-person events has changed dramatically, so this year we started One Lambda Legal."

Harold Hagen, a gay man who serves as co-chair with Stevens, said that nonprofits like Lambda Legal have had to adjust to become more creative.

"Obviously this represents a big change," Hagen said. "Not just Lambda Legal finds itself in this position."

Lambda Legal usually held a springtime San Francisco soiree that was one of about a dozen similar events around the county. It had been held at the Fairmont hotel atop ritzy Nob Hill. Most recently, in 2019, it was held at The Pearl, an events venue just a few blocks south from the Chase Center on the city's bayside waterfront.

"We'd hoped to book there again, but COVID has made that impossible," Hagen said, adding that the San Francisco soiree raised "hundreds of thousands, if not more" each year. Neither Stevens nor Hagen could say how long the local event's been going on, but it's been at been two decades. Lambda Legal was founded in 1973, according to its website.

Lambda Legal has already raised $3 million of the $5 million goal, according to a spokesperson, since the year began.

Stevens said he hopes people don't lose focus on LGBTQ equality, even with recent advances in some areas.

"The message I would send is that with marriage equality and the Bostock decision, it's all too easy to get too sanguine about LGBTQ equality," Stevens said, referring to the U.S. Supreme Court's 2015 Obergefell same-sex marriage decision and its 2020 LGBTQ employment ruling. "But there's a lot of work left to do. Lambda Legal is doing that work, around trans inclusion and the quote-unquote religious liberty backlash ... and Lambda Legal has a phenomenal track record of success."