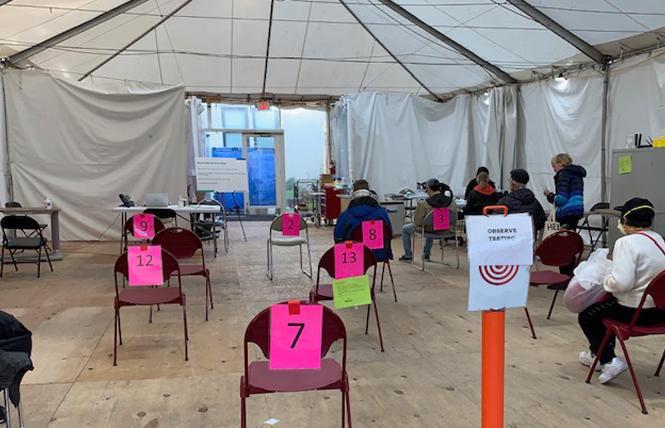 The Castro LGBTQ Cultural District will be reopening its Saturday vaccination clinic in the parking lot at 18th and Collingwood streets, nestled by Toad Hall and Walgreens, beginning September 25.

The Castro LGBTQ Cultural District will be reopening its vaccination clinic in a new location — the parking lot at 18th and Collingwood streets, nestled by Toad Hall and Walgreens — beginning this Saturday, September 25.

The hours will be 11 a.m. to 5 p.m. each Saturday through the end of the year, except Saturday, October 2, as the hub will operate during the Castro Street Fair October 3.

As the Bay Area Reporter previously reported, the district announced a weekly vaccine hub on Noe Street between Market and Beaver streets that grew out of an effort to honor the late LGBTQ activist Marsha P. Johnson.

However, last week the B.A.R. reported that this ended. Tina Valentin Aguirre, the manager of the district, stated to the B.A.R. that this was because Noe Street businesses complained to the Castro Merchants Association (which is partnering with the district on the project) that the vaccine hub blocked customer access.

"We heard this, we understand it, and we empathize with the business owners; in this case two of them are LGBTQ-owned and as a district we are especially committed to ensuring that LGBTQ businesses, residents, and visitors to the Castro are prioritized," Aguirre stated.

"The Saturday Noe Street testing and vaccination program is using the street closure allowed by the Shared Spaces permit held by the Castro Merchants," Castro Merchants community liaison Nik Blanchet stated earlier this month. "While adored by many — visitors, residents, and businesses alike — the Shared Spaces-related street closures are not zero-impact. Some merchants experience a business boost, and others, particularly those reliant on customer parking or meal delivery services, experience a decrease. ... Castro Merchants is in regular communication with our members on this topic, and we are optimistic we can come to a fair, equitable compromise for the neighborhood. We provide a forum for, and welcome, our members to express their opinions and needs for everyone's consideration."

Aguirre told the B.A.R. September 22 that the vaccine hub was back on for the new location.

Stephen Torres, secretary of the cultural district's board, told the B.A.R. later that day that after working with the Department of Public Health and the Castro Merchants to find a new spot, the city-owned parking lot was identified.

"The MTA owns the lot and the MTA maintains it," Torres said, referring to the San Francisco Municipal Transportation Agency. "The Department of Public Health, working in collaboration with them, identified it. The MTA sees this as a priority, as does Supervisor [Rafael] Mandelman's office, so we've all worked together to expedite it accordingly."

In a statement, Blanchet tied it to Mayor London Breed's vaccine mandates.

"As the Castro Merchants, we have our eye on the October 13 deadline the city has set for all employees in restaurants, bars, clubs, gyms and entertainment venues to be vaccinated," Blanchet wrote. "Since these businesses form a very important cornerstone for the vitality of the Castro we want to make sure we are providing every opportunity possible for those employees to easily get vaccinated. We are also pleased that this provides residents and visitors with a very convenient avenue to get their vaccinations."

In a statement, Mandelman said he was supportive.

"Having easy access to testing and vaccines, including boosters for those who are eligible, is critical to our efforts to end the pandemic," Mandelman stated. "It is great to have a site offering these services in the Castro, particularly one that is targeting people living with HIV, LGBTQ+ seniors and other vulnerable populations. Thanks to the Castro LGBTQ Cultural District and the Department of Public Health for making this happen in the neighborhood."

When asked for comment, the health department stated to the B.A.R. that "vaccination remains the gold standard for COVID-19 prevention."

"Vaccinating as many people as possible, as soon as possible, is our best defense against COVID-19, and the harm it can do to our communities," a spokesperson stated. "We still have thousands of people in our city that remain unvaccinated. Our joint work with our community partners has been key to our virus mitigation strategies. "

SFMTA did not respond to a request for comment.

Torres added that the site will be accessible for people with disabilities.

Promotional material for prior vaccine hubs gave "the high number of Delta variant COVID infections among LGBTQ residents, workers, and visitors of the Castro" as the reason for the hub. When asked if this was an empirical finding, Torres said that he "couldn't speak to that specifically" and directed the B.A.R. to Maceo Persson, a queer trans man who is the deputy director of the community branch for the health department's San Francisco COVID Task Force, who didn't immediately respond to a request for comment.

As the B.A.R. has extensively covered since the start of the pandemic, there is no empirical data on how many LGBTQ people have contracted COVID, died from the coronavirus, or are now inoculated against it due to various issues in collecting sexual orientation and gender identity health data.

"We do know — based on the findings in Provincetown and other locations — that it did seem to affect a great deal of the LGBTQ community and we should be prepared to meet that need specifically," Torres said, referring to an outbreak in July in the Massachusetts gay tourist spot.

Updated, 9/23/21: This article has been updated to state that COVID vaccines will be available at the Castro Street Fair Sunday, October 3 and to include comments from Supervisor Rafael Mandelman.

Updated, 9/28/21 This article has been updated to include comments from the health department.

Castro's 18th Street to remain open to traffic — for now
Sign up!