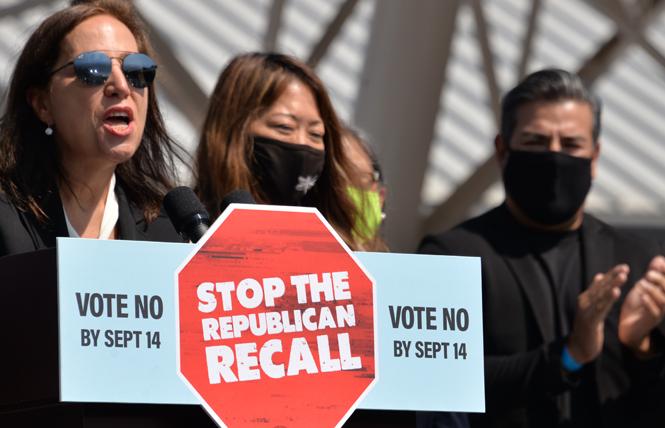 California Lieutenant Governor Eleni Kounalakis recently announced that she's formed a transgender advisory council made up of trans leaders from around the state to foster dialogue between state leaders and the transgender community. While we are pleased that she's taken that step — and the nine people selected do represent various geographic areas around the Golden State — one locale is missing from the table: there is no one from a San Francisco-based agency serving on it.

This is unfortunate for a number of reasons. Kounalakis is from San Francisco, which, of course, is home to the world's first trans-specific cultural district, the Transgender District. The mayor's office also created the Office of Transgender Initiatives, which provides policy input and guidance to city departments and performs other critical tasks. Even San Francisco Pride just announced that it has a trans-majority of board members. There are many nonprofits here serving the trans community, including trans women of color.

As we have reported for years, trans people living in San Francisco are disproportionately impacted by homelessness, unemployment, and physical violence. That mirrors the situation throughout California, and indeed the country. San Francisco has established - and funded with millions of dollars - various programs to address these needs, such as adult trans housing and rental subsidy programs.

As a side note, Equality California, the statewide LGBTQ rights group, provided some input for the advisory council after Kounalakis reached out to it. We find it somewhat astounding that EQCA couldn't tell us if it recommended anyone from San Francisco, considering its long ties to the city via its various board members over the years.

Some of the advisory council members and the spokeswoman for Kounalakis expect that the panel will see increased membership. We recommend that occur soon, so that more trans Californians can provide input on critical issues affecting the community. As Aria Sa'id, the president and chief strategist of the Transgender District told us, not having anyone from San Francisco on the advisory council is indeed a missed opportunity.

Taking a stand on Hungary
Kounalakis also passed up a chance to stand in solidarity with the LGBTQ community in our report this week about top Hungarian diplomats who had their photo taken in San Francisco City Hall last month. That drew the ire of some Hungarian Americans and LGBTQ leaders because Hungarian Prime Minister Viktor Orban has been on an anti-LGBTQ tirade in anticipation of elections in his country next year. The City Hall occasion was to observe the National Day of Hungary, which was organized by the Mayor's Office of Protocol. While Mayor London Breed was not at the flag-raising, the photo op nonetheless has caused her office to issue a statement saying it would increase vetting for similar events in the future. Obviously, photos of representatives of the Orban government being welcomed in San Francisco City Hall are a potential propaganda coup for the regime — implying the support of a city that is a worldwide beacon for LGBTQ equality.

András Doncsev, Orban's former speechwriter, now serves as Hungary's technology ambassador in Santa Clara and has been posted in San Francisco as the science and technology attaché. Doncsev and Hungarian Honorary Consul Eva E. Voisin attended the City Hall event. Kounalakis, who served as U.S. ambassador to Hungary during the Obama administration, knows a great deal about the country. However, she declined to speak with our reporter about the Doncsev photo op or Hungary's recent anti-LGBTQ propaganda law or its anti-Semitic government.

In 2020, Orban and his ruling Fidesz party launched a barrage of legal assaults against Hungary's LGBTQ community from banning gender recognition to same-sex marriage and adoption. The country does recognize civil unions. In an interview, Doncsev denied that there is anti-Semitism or homophobia in his country, which is ridiculous. He told the B.A.R. that "these are very, very strong serious allegations," and suggested we check with the Anti-Defamation League regarding anti-Semitism in Hungary. In fact, in February, the ADL called out Hungary, along with some lawmakers in the British Labour Party, Poland, and Russia for using anti-Semitism for "political means," in a report.

Kounalakis has been a good ally to the LGBTQ community. She co-sponsored legislation this year that benefits the community. Assembly Bill 387, by Assemblywoman Rebecca Bauer-Kahan (D-Orinda), eliminates gendered language referencing constitutional officers. It was signed by Governor Gavin Newsom. AB 245, by Assemblyman David Chiu (D-San Francisco), would ensure that California public colleges and universities allow transgender and nonbinary students to have their name and gender accurately reflected on academic records. It is currently on the governor's desk. But being an ally also means standing up to powerful leaders, whether here or abroad. Kounalakis could have used the Hungarians' photo op to solidify her commitment to the LGBTQ community and concerned allies, both here in San Francisco and in Hungary, rather than choosing to remain silent.