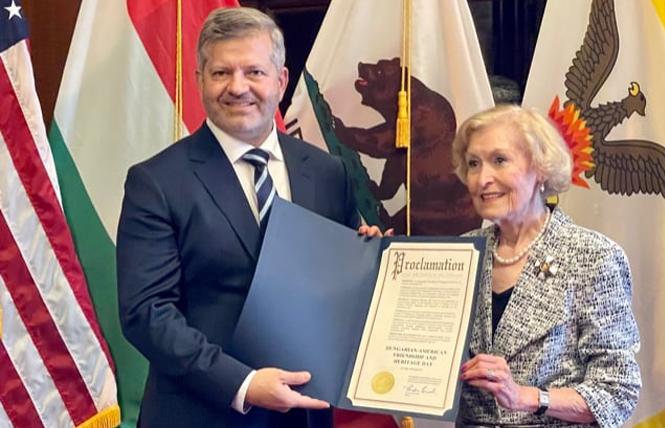 The recent appearance of Hungarian diplomats at a San Francisco City Hall gathering has been criticized by Hungarian Americans and LGBTQ leaders, and has resulted in Mayor London Breed vowing to tighten up vetting for future events.

Photos of Doncsev and Hungarian Honorary Consul for Northern California Eva Voisin, appeared on social media following the August 20 National Day of Hungary flag-raising event, which was organized by the city's Office of Protocol. The photos show Voisin and Doncsev holding a proclamation in Mayor London Breed's office and taking pictures with other guests on the mayor's terrace during an August 20 observance of the National Day of Hungary.

Doncsev currently is Hungary's technology ambassador in Santa Clara and has been posted in San Francisco as the science and technology attaché, according to a September 14 letter Voisin wrote to Breed. The event was to honor Hungary's founding and the contributions made by Hungarian Americans to the city.

Breed did not invite Doncsev to City Hall and she was not at the event, Jordan Wilson, a communications aide at the mayor's office, told the Bay Area Reporter in an email September 20. The B.A.R. did not find any photos of Breed at the event.

Doncsev sounded confused when he spoke to the B.A.R. September 21 stating, "There is no controversy."

He told the B.A.R. that he was invited by the mayor's office to participate in the National Day of Hungary celebration as he had in 2019. The event was not held in 2020 due to the global COVID-19 pandemic, he said.

The B.A.R. could not find any photos of Doncsev previously attending the event since his taking the job in 2018, as he claimed. In 2020, Voisin was in Budapest for the annual celebration, according to photos on the Honorary Consul General of Hungary for Northern California's Facebook page.

Orban has come under criticism from human rights organizations for his government's anti-LGBTQ laws and anti-Semitic policies. In 2020, Orban and his ruling Fidesz party launched a barrage of legal assaults against Hungary's LGBTQ community from banning gender recognition to same-sex marriage and adoption. The country does recognize civil unions.

Better vetting
Breed is a strong supporter of the Jewish and LGBTQ communities. Her office noted that while Doncsev has not espoused any anti-LGBTQ or anti-Semitic positions, nonetheless her protocol office will make changes.

"While we have no specific information reflecting the values of the individual in question, the mayor has requested stronger controls be put in place on our flag-raising events to ensure that we can continue to have these important ceremonies to celebrate the diverse culture of our city and our international relationships," the mayor's office stated September 21.

The honorary Hungarian consul submitted its guest list to the Mayor's Office of Protocol, which organizes flag-raisings at City Hall for various countries, Wilson wrote.

Voisin did not respond to the B.A.R.'s request for comment by press time. However, in her letter to Breed, she denied claims by a Bay Area Hungarian American who wrote a blog post about the event critical of the Hungarian government and the mayor's office.

"The flag-raising is in no way an expression or endorsement of political views," Voisin wrote.

LGBTQ political leaders were critical of the Hungarian government.

"The government of Hungary is a hateful, homophobic, and anti-Semitic government," gay Jewish California state Senator Scott Wiener (D-San Francisco) texted the B.A.R. "I'm glad that the mayor is taking these steps."

"This appears to have been an honest but unfortunate mistake, and the mayor's office has pledged to do better in the future," Mandelman wrote in an email to the B.A.R.

California Lieutenant Governor Eleni Kounalakis (D), who was the United States ambassador to Hungary during former President Barack Obama's administration, declined to comment for this article. She recently launched what is believed to be the country's first statewide transgender advisory council and co-sponsored LGBTQ rights bills this year.

"I'm quite upset," György Lázár told the B.A.R. The regular contributor to the Hungarian Free Press wrote an open letter to the publication September 14 criticizing Breed. Lázár, who identifies as straight, urged others to speak out against the city's government hosting diplomats from authoritarian governments at events.

Speaking to the B.A.R., Lázár, who lives in Oakland, expressed he was angry about Orban's diplomats using American government leaders for publicity stunts and the community not speaking out about it. He is also upset with American Hungarian organizations' lack of response to Orban's homophobic attacks on Hungary's LGBTQ community.

"They are not up in arms and protesting," Lázár said. "They are not willing to stick their neck out and say, 'Hey, this is not right.'"

"Let me make it very clear there is absolutely zero tolerance in Hungary for anti-Semitism," he said, calling the allegations "rumors."

Doncsev said that his wife is Jewish and he attends the American Jewish Committee events in San Francisco regularly.

He told the B.A.R. that "these are very, very strong serious allegations," and suggested the paper check with the Anti-Defamation League regarding anti-Semitism in Hungary. In February, the league called out Hungary, along with some lawmakers in the British Labour Party, Poland, and Russia for using anti-Semitism for "political means," in a report.

Doncsev went on to state "There is no anti-LGBT, no homophobic laws in Hungary."

When the B.A.R. asked directly about 2020's anti-gender recognition and same-sex marriage laws, he only referenced the recently passed anti-pedophilia law that included an anti-LGBTQ propaganda clause.

"It is not anti-LGBTQ. It is a misunderstanding. There was a child protection law that was passed," he said.

Doncsev spoke with the B.A.R. and did not indicate the conversation was off the record. Afterward, he sent the paper an email stating that he is not supposed to make any comments.

In her letter, Voisin criticized Lázár. "Mr. Lázár is well known for his frequent attacks on members of the Hungarian government and local leaders of the Hungarian American expatriate community," she wrote. "The comments are his opinion alone to which he is certainly entitled."

But Voisin refuted his comments as being accurate. Defending Doncsev, she wrote, "He does not promote racist, homophobic, or anti-Semitic ideas and I can positively state that neither of us hold these views."

This year, Hungary lawmakers passed the so-called LGBTQ propaganda law. The homophobic attacks are among other civil liberty violations by Orban and the ruling Fidesz party that are increasing leading up to the Central European country's 2022 elections.

"It is not just the gay community," Lázár said, that the Hungarian leadership has attacked, as he noted the assault on LGBTQ rights echoes the government's legislative and media attacks on Jewish, Roma, immigrants, and other minority communities.

Husbands Dennis Blanchard, 71, and Barry Lynch, 70, visited Hungary in 2000 and fell in love with the country. They have returned for extended stays annually since they both retired. The couple last visited Hungary in 2020 right before the global COVID-19 pandemic. They were planning to return in 2022, but they are now questioning going.

"Should it have happened? No," Blanchard said of the City Hall event, adding that the protocol office should have done a better job vetting guests. "To provide any kind of public forum like that gives them an opportunity to normalize who they are. [It] is inappropriate."

Together for 25 years, Blanchard and Lynch said there should be some kind of policy similar to the city and California's travel ban. California lawmakers in 2015 banned state-funded travel to states that discriminate against LGBTQ people with the enactment of Assembly Bill 1887 authored by gay Assemblyman Evan Low (D-Campbell). The Golden State's no-fly list covers government workers, academics, and college sports teams at public universities. San Francisco has a similar policy that also includes states that have anti-abortion laws.

"I'm willing to give her the benefit of the doubt that nobody did their homework to find out who this was," Lynch said of the mayor's office. "I'm trying to be generous."

Hitting back hard
The E.U. is fighting back against anti-gay laws in Hungary and Poland. The regional governing body, of which Hungary and Poland are two of the 27-member states, took financial and legal actions against the countries for their anti-LGBTQ laws.

Dutch Prime Minister Mark Rutte simply told Hungary to leave the E.U. if it could not abide by its values.

At the end of 2020, the E.U. launched a five-year plan to streamline LGBTQ rights throughout the union.

Last week, European Commission President Ursula von der Leyen signaled she would continue the battle against Hungary and Poland, stating their actions undermine democracy's checks and balances and infringe upon the E.U.'s fundamental values. The commission is the executive branch of the E.U.

"These values are now enshrined in our European treaties. This is what we all signed up to when we became part of this Union as free and sovereign countries," von der Leyen said in an annual policy speech September 15, reported Reuters.

"We are determined to defend these values," she added.

Bloomberg reported that both Hungary and Poland have stopped entertaining the idea of exiting the E.U., but neither country has stopped its assaults on their LGBTQ communities.

The same day von der Leyen gave her state of the union speech, Hungary's media regulator ranked depictions of same-sex attraction and gender identity the same as horror films in its new broadcaster guidelines. The ranking is in line with the country's June law banning explicit "display and promotion of homosexuality" for minors.

Out in the World: Leaders of Israeli queer youth agency visit San Francisco
Sign up!