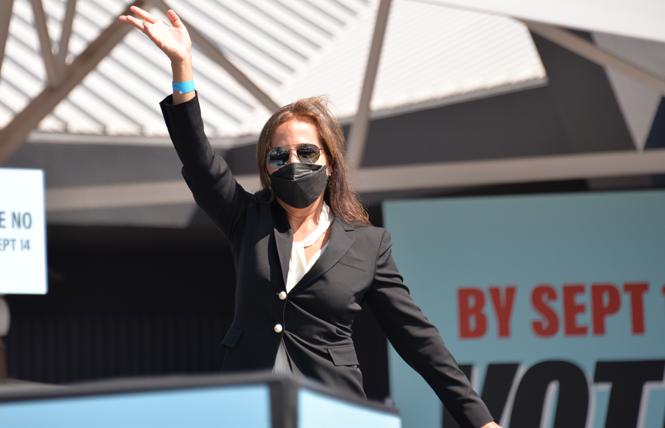 California Lieutenant Governor Eleni Kounalakis has formed a transgender advisory council, but it doesn't include anyone from a San Francisco-based agency. Photo: Bill Wilson

Kounalakis' office announced the new council September 12, describing it as the first of its kind in the nation. The council will "advise the Lt. Governor and create a forum to discuss issues affecting the transgender community," according to a news release.

"Here in California, I'm proud we have enacted many protections for LGBTQ+ people, but we still have work to do, and that is especially true for issues facing our transgender and nonbinary family, friends, and neighbors," stated Kounalakis, who hails from San Francisco.

"Establishing this council gives transgender leaders the space to have an open dialogue with key stakeholders who may not have otherwise had the opportunity to hear directly from them. I hope bridging this gap will help to amplify important issues and bring more understanding of the community. I look forward to the opportunity to listen, to learn, and to help elevate the voices of the members," she added.

The council began the first of a series of ongoing meetings last week, the release stated. Bamby Salcedo, a trans woman who is president and CEO of TransLatin@ Coalition, told the Bay Area Reporter that "I'm very glad and fortunate I was approached to be part of this group."

Salcedo said she believes it was Equality California, the statewide LGBTQ rights advocacy organization, that recommended she be selected for the consultative group. As the B.A.R. previously reported, Salcedo was a key voice for the creation of a statewide trans health fund that state leaders awarded $13 million this year.

"It seems like EQCA first had conversations with the lieutenant governor's office and they are the ones who basically threw my name in the hat," Salcedo said. "We had conversations, and they thought I was a good fit and they invited me to be a part of it."

When reached for comment, EQCA Communications Director Samuel Garrett-Pate did not answer if the group recommended anyone from a San Francisco-based organization, but did say "we recommended people from the Bay Area." He noted that Ian Anderson, the legal services project manager with the Oakland-based Transgender Law Center, is a member of the council. (Anderson did not immediately respond to a request for comment.)

Garrett-Pate added that the lieutenant governor's office had reached out to EQCA for recommendations on the panel's membership.

"Our team was happy to recommend a number of our partners across the state, who reflect the gender, ethnic, geographic and socioeconomic diversity of California's TGI communities," Garrett-Pate stated. "Ultimately, the lieutenant governor chose the initial members. We are proud that Equality California Institute Program Manager Zizi Bandera was selected to participate, and we are incredibly grateful to the lieutenant governor for her leadership in the fight for trans equality."

Salcedo said that her goal in being part of the council is to "be connected to the legislators and other institutions that influence the livelihood of people."

"Through the lieutenant governor's office, we can influence not just politicians but other institutions in the state," she said. "To my knowledge, I don't know of any other state with an official body, so this is obviously a trailblazer, so to speak. I hope others follow as well."

Virginia Governor Ralph Northam, a Democrat, signed legislation this spring that created a statewide LGBTQ advisory board. According to an NBC News story about its creation, there are similar bodies in New York and Pennsylvania. California cities like West Hollywood, Los Angeles, and San Francisco have created transgender-specific advisory boards.

Evan Minton, a trans man who's based in Sacramento County and is the California legislative advocate with Voices for Progress, is serving on the Golden State's trans advisory council. He told the B.A.R. that he has already had a partnership with Kounalakis' office as part of advocating for health care access.

"When I was reached out to and asked to be part of this council, I said yes and saw it as a unique opportunity to work with someone who cares a lot about our community and wants to get stuff done," Minton said. "It's been helpful already."

Minton said he's working on trying to improve the Sacramento Police Department's interactions with trans and gender-nonconforming people, as well as to ensure compliance with AB 1732, the state law that requires single-occupancy bathrooms to be gender neutral.

Another member is Palm Springs Mayor Pro Tem Lisa Middleton, who's also on the City Council. She was the first transgender person elected to a non-judicial office in the Golden State.

Katie Hanzlik, a spokeswoman for Kounalakis, told the B.A.R. that the lieutenant governor wanted to facilitate conversations between trans people and policymakers. Kounalakis co-sponsored Assembly Bill 378, for instance, authored by Assemblywoman Rebecca Bauer-Kahan (D-Orinda) and signed into law by Governor Gavin Newsom this summer. It systematically goes through laws related to the offices of the governor, lieutenant governor, attorney general, secretary of state, state controller, treasurer, insurance commissioner, and board of equalization to make all references to the gender of the officer gender neutral.

"The lieutenant governor has been a longtime ally of the LGBT community and she talks to a lot of activists and folks on the ground about the work they're doing," Hanzlik said. "This started to come up frequently ... and it was an issue that inspired her to help enact policies that help trans folks. The main goal is to connect members of the council with stakeholders of different industries so that they can hear directly from the community."

SF not represented
San Francisco — which has a sizeable trans population, the world's first and only Transgender District, and the Office of Transgender Initiatives under the aegis of the mayor's office — doesn't seem to be represented on the new council, as there is no representative of a San Francisco-based nonprofit or agency.

In addition to several nonprofits catering to the trans community, the San Francisco LGBT Pride Celebration Committee, which produces the annual parade and festival, recently elected its first majority-trans board. Suzanne Ford, currently the vice president, won her second three-year term on what will now be an 11-member board, according to a September 15 release. Including Ford, six members identify under the broader trans umbrella: Janelle Vinson, Maceo Persson, Di'ara Reid, Spring Collins, and Anjali Rimi.

Hanzlik, with the lieutenant governor's office, said she'd figure out if any of the state panel members "live or work" in San Francisco. She got back to the B.A.R. with this statement: "Our founding council members reflect a diverse group of individuals from across the state of California. As the council evolves over time, we expect to add council members who will continue to represent California and the diverse perspectives of those in the transgender community."

Aria Sa'id, a trans woman who is president and chief strategist of the Transgender District, said she "had no idea this was happening until now."

"I do think it's a huge misstep to not have San Francisco represented in their advisory council as we hold the largest transgender population of any other county or city in both the state of California, but also the country," Sa'id told the B.A.R. "I think ignoring that fact doesn't allow for state government to be fully informed or advised on the issues transgender people are facing in the state of California. We have issues unique to our experience of San Francisco that the state should be intentional in gaining insights on.

"I also noticed there isn't a strong representation of Central California and the more rural areas of the state — also a huge misstep and missed opportunity," she added.

Honey Mahogany, who as the chair of the San Francisco County Democratic Party is the only trans or gender-nonconforming chair of a county political party anywhere in the nation, said she hopes for greater diversity going forward, but expressed confidence.

"I think it's great that the Lt. Gov. has created this advisory council," Mahogany said. "I hope it proves to be an opportunity to create positive, systemic change. I recognize several names on this list as longtime activists in the trans community whom I'm sure will contribute greatly to the work of the council.

"While I always want to see people from San Francisco represented and included, I am glad to see that there are people from all across the state holding seats," Mahogany added. "I also hope that we continue to diversify and expand the council as time goes on."

"I'm super grateful the Central Valley is on the committee, and I'm thankful we have representation from deep in Southern California," Minton said. "It is my understanding the representation might be expanded, and that's an excellent idea."

Pau Crego, the acting director of San Francisco's Office of Transgender Initiatives (Executive Director Clair Farley is out on leave), praised Kounalakis, stating "This is a momentous occasion for our communities to be heard and represented at the State level, and to elevate the crucial work that so many trans and nonbinary leaders are doing on gender, racial, and economic justice every day. The San Francisco Transgender Advisory Committee looks forward to collaborating with the California Transgender Advisory Council with the goal of reaching greater equity for our communities."

When asked to comment on the lack of San Francisco representation, Crego stated that "It actually is represented by an SF Bay Area-based agency," referring to the Transgender Law Center.