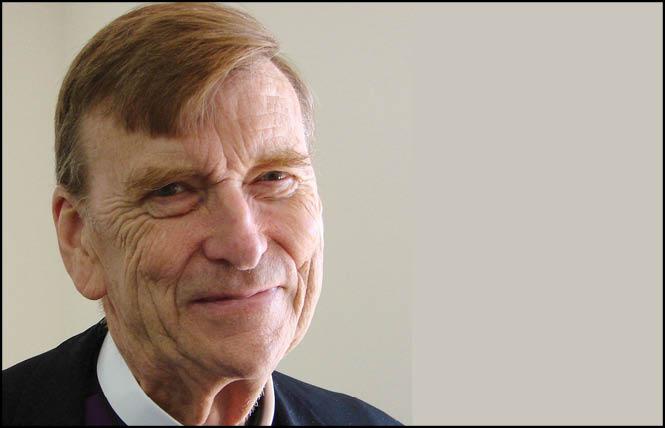 Bishop John Shelby Spong, a liberal theologian and ally who championed women's and LGBTQ ordinations and rights, died September 12 peacefully in his sleep at his Richmond, Virginia home. He was 90.

Mr. Spong grew up in Charlotte, North Carolina with fundamentalist Christian parents, though he would spend the rest of his adult life rejecting biblical literalism.

Mr. Spong was ordained an Episcopal priest in 1955 after receiving a master's degree in divinity from Virginia Theological Seminary. While serving at Southern churches, he preached against racism. When Mr. Spong was appointed rector at St. Paul's Episcopal Church in Richmond in the early 1970s, he removed the Confederate flag that had flown above the building. He was appointed bishop coadjutor in 1976 in the Diocese of Newark, New Jersey, becoming sole head bishop in 1979 until his retirement in 2000. At his peak in the 1990s, Mr. Spong made regular appearances on TV talk shows like Oprah, publicly calling on his church to reject supernaturalism (i.e. heaven/hell) and embrace the new scientific cosmology, as well as welcome LGBTQ people into their congregations.

He published over a dozen books, with a gift for explaining complex theology to lay readers, with his first one "Living in Sin? A Bishop Rethinks Human Sexuality" appearing in 1988. After Robert Williams read the book, he contacted Mr. Spong and asked him to ordain him as the first openly gay man to the Episcopal priesthood, which occurred on December 16, 1989. Mr. Spong had already been ordaining women to the priesthood since the official approval in 1976 at a time when it was still unpopular to do so. By the time he retired, he required any church in his diocese that was looking for a new pastor to interview at least one female candidate. A lesbian, Ellen Barrett, had been ordained in 1977 by Bishop Paul Moore in New York City, but Williams' ordination made national headlines because Mr. Spong deliberately provoked the contentious issue by sending invitational letters to all the bishops asking them to attend the historic event.

The Episcopal House of Bishops voted to censure Mr. Spong in 1990 for the ordination. He continued to advocate sex outside marriage and the blessing of same-sex relationships long before the church's official adoption of the latter in 2012.

The Reverend Jim Mitulski, the former pastor of Metropolitan Community Church-San Francisco and now pastor of Island United Church UCC in Foster City, was a personal friend of Mr. Spong's for over 25 years. In an email interview with the Bay Area Reporter, Mitulski, a gay man, said he invited Mr. Spong to preach at MCC-SF several times.

"He was like a rock star to us and ironically he was persona non grata even in the so-called liberal Episcopal diocese here in San Francisco, where he was forbidden to preach from any of their pulpits," Mitulski wrote. "He and his wife Christine (and they were an excellent team) took on the same stigma that gay people experienced routinely in the churches we had left. He saw the cruelty and viciousness that his own denomination, with a polite veneer, bestowed on him just for being our outspoken advocate. He broke rank with the establishment and stood with us.

"One year I remember he was invited to speak to the adult class at Grace Cathedral, but they still didn't invite him upstairs to preach at the worship service afterward. Their loss was our gain; we were eager to hear his prophetic words. He always responded to his own church's rudeness with a forgiving spirit," Mitulski added.

Mitulski wrote that Mr. Spong taught summer school at the Pacific School of Religion in Berkeley.

"He was by far the most popular instructor and he also came to Sunday chapel services for which I was responsible," Mitulski wrote. "One Sunday, a professor and Episcopal priest used an experimental liturgy the Episcopal Church was considering, that he helped author, to bless same-sex couples. We called couples forward who wished to be blessed using this new ritual. Jack and Christine presented themselves with all the gay and lesbian couples to receive the same blessing, as a natural expression of their solidarity with us. This was during that weird period when same-sex weddings had been suspended in California after initially being considered legal, so their action was both political and religious."

Mitulski stated that the now widespread acceptance of LGBTQ people in the Episcopal Church is due in part to a visionary leader like Mr. Spong.

"I hope the Episcopal Church takes the time to apologize for their treatment of him and his wife even as many will now rush to claim him these many years later as one of their pioneers," Mitulski wrote. "His colleagues in the House of Bishops behaved badly toward him because he told the truth. His actions did not cause division — they revealed divisions already taking place about what the role of the church is. We are not here to sanctify an oppressive social order; we are here to stand with the oppressed and marginalized, especially when the church is the source of the oppression, as it is with sexism and homophobia so often. Bishop Spong set a new high bar."

In an interview for the Washington Post's obituary of Mr. Spong, Bishop Gene Robinson, the Episcopal Church's first openly gay bishop, declared that Mr. Spong was a prophet, meaning "someone who speaks truth to power, who says those things that people don't want to hear because it calls their morality and their lives into question. I stand on his shoulders. Were it not for the work that he did and the ministry that he did and the advocacy on behalf of LGBTQ people that he did, I wouldn't be a bishop. He did it long before it was popular or politically correct — he did it because he believed it was the gospel."

Widely admired
Presiding Bishop Reverend Dr. Marc Handley Andrus of the Episcopal Diocese of California, in an email interview with the B.A.R., also admired Mr. Spong greatly. He remembered a debate on LGBTQ rights at a seminary between Mr. Spong and a conservative bishop.

"The conservative bishop dragged out an often-quoted verse from the Book of Leviticus: 'If a man lies with a male as with a woman, it is an abomination ...' Bishop Spong replied: 'I take you hold the Bible to be literally true, don't you?' The conservative bishop said, firmly, 'Yes!' Spong quickly replied, 'Then you surely know the conclusion of that verse, don't you.' The other bishop stood speechless. Spong said, 'Let me quote it for you then — They shall surely be put to death; their blood is upon them. Since you believe in the so-called literal meaning of the Bible, then you must believe this too.' The other bishop stammered and tried, unsuccessfully, to recover."

Andrus added that Mr. Spong helped teach the Episcopal Church and many outside of the church about what being an ally is.

"I hope that the incredible work that has taken place since Bishop Spong's heyday has made our allyship more skillful and stronger," Andrus stated.

Mr. Spong enjoyed his role as provocateur, to raise questions the church would prefer to ignore. In his book "A New Christianity For a New World: Why Traditional Faith is Dying & How A New Faith Is Being Born" (2002), he called for a new reformation for a new age. He denounced theism as a way to talk about God, dismissed the divinity of Jesus, rejected the Virgin Birth and miracle stories, threw out original sin, denied the physical Resurrection and Ascension, and claimed "prayer cannot be a request made to a theistic deity to act in human history in a particular way." His supporters claimed he brought back people who had left the church or prevented those considering leaving from exiting.

To his many critics, Mr. Spong was a heretic — that the changes he was advocating would destroy Christianity as society knows it. In a 2013 interview with the Religious News Service and always remaining the epitome of the kind Southern gentleman, he answered these charges.

For Mitulski, Mr. Spong was a person of deep faith who cared deeply about the spirituality of others, especially liberating people from fundamentalist religion.

"He wanted people to believe what they believed with integrity, and to use their God-given intellect to grow spiritually," Mitulski wrote. "He taught about Jesus the Poet and Jesus the Social Change Activist, not Jesus the Upholder of the Status Quo. He trusted the laity with the knowledge that the clergy have had for several generations. An informed faith is a real faith, a rock solid faith. A questioning faith is dynamic and helps us navigate the real world. I loved his fine mind, but even more his great heart."

"Bishop Spong's faith was the faith of a person open to the living Spirit, not blindly accepting the teachings of the past, but see where we are led to be today," Andrus wrote. "On doctrine, it is not so much that Bishop Spong disproved or laid down new definitive doctrine and belief, but rather that he opened us up to more curiosity and imaginative thinking."