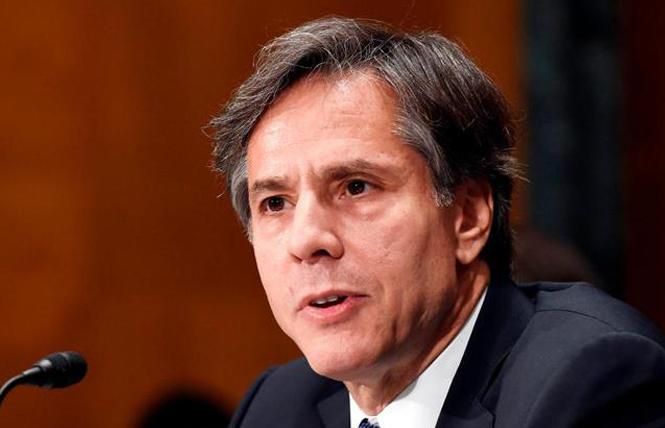 The coalition is made up of the Council for Global Equality; Human Rights Campaign; Immigration Equality; International Refugee Assistance Project; the Organization for Refuge, Asylum, and Migration; and Rainbow Railroad.

The organizations introduced the brief, 10-point plan, and letter to Biden in a September 6 joint news release.

The call to action comes nearly three weeks after 64 members of Congress called upon Secretary of State Antony Blinken to protect LGBTQ Afghans. In a September 13 statement, Blinken announced the U.S. is providing nearly $64 million in new humanitarian assistance.

As the Bay Area Reporter previously reported, LGBTQ Afghans have sent desperate messages pleading for help to escape. Homosexuality is illegal in Afghanistan and LGBTQ people face the death penalty.

The mass evacuation has also torn some same-sex couples apart. A gay Afghan, whose name was not released for his safety, recounted to Reuters his separation from his partner, who is now in a refugee camp in Qatar.

The Taliban took control of Kabul, Afghanistan's capital, August 15. The U.S. completely withdrew August 30. More than 123,000 Afghan evacuees, including more than 6,000 Americans, got out of the country during the 16-day wind down period.

The coalition expressed its disappointment that Biden's administration did not extend the deadline to "evacuate more at-risk refugees from Kabul," the letter read.

Queer Afghans and global LGBTQ advocates are concerned that the Taliban will return to brutal Islamic rule like it did from 1996 to 2001.

Nemat Sadat, who became the first Afghan to publicly come out as gay and ex-Muslim in 2013, has been helping queer Afghans.

"Afghanistan's LGBTQIA community has been fighting on the frontlines in the global war on radical Islam. For the past two decades, LGBTQ+ Afghans have risked it all to legitimize the democratic experiment and usher social progress in Afghanistan, even though they were themselves criminalized under the law and benefited the least from the billions in aid that flowed into the country," he wrote in a statement to the B.A.R. "When Kabul fell and the Taliban took over, the incremental gains that LGBTQ+ Afghans had made reversed overnight and now they also face an imminent threat of extermination under Sharia law. Does the US want to be remembered for abandoning our LGBTQ+ brothers and sisters in Afghanistan to the world's most tyrannical terrorists or rescue the lives of the most vulnerable people, in the most dangerous country right now?"

In July, Taliban Judge Gul Rahim told German magazine Bild that there were only two punishments for homosexuals under Sharia Law: execution by stoning or a wall falling on them. Reports of LGBTQ Afghans being executed by Taliban soldiers had been making headlines around the world before the U.S. completely withdrew from Afghanistan.

The plan
This is why the coalition is urging Biden to follow the 10-point plan the organizations developed to protect and relocate LGBTQ Afghans, which includes recommendations such as cutting bureaucratic red tape and financial support.

In the release, Mark Bromley, chair of the Council for Global Equality, called for the Biden administration to move from "statements of concern" to "meaningful action."

"This 10-point plan will provide the basis for expedited refugee processing, transitional support, and LGBTQI-affirming resettlement," he said. "This plan will save lives if it's implemented quickly and effectively."

The coalition reminded Biden in the letter that "the decision to withdraw from Afghanistan will be part of your legacy, so too will be the actions your Administration takes to ensure the well-being of these populations."

In August, Biden and Blinken pledged to continue evacuation efforts for the remaining Americans and safe passage for Afghans wishing to leave the country.

The coalition expressed hope in the letter stating it was "heartened" by the administration's pledge to continue to support refugee evacuation and resettlement in the coming weeks.

The coalition invited others to pressure the Biden administration to adopt the plan.

"The United States bears a special responsibility not to abandon those we have encouraged along the path to democracy and human rights, and to act expeditiously to ensure their safety," the coalition's letter stated.

The U.S. has not specifically offered refuge to LGBTQ Afghans. In the Bay Area, Fremont is home to the U.S.'s largest Afghan community in the U.S. Congressman Ro Khanna (D-San Jose), who represents the South Bay, including Fremont, has not responded to the B.A.R.'s request for comment. Khanna did not sign the August 24 letter calling on Biden to evacuate LGBTQ Afghans.

"The international community must act in concert to protect vulnerable populations now placed at risk," the coalition stated, urging the Biden administration to follow the plan.

Representatives from an estimated 83 countries began arriving this week in New York for the UNGA, reported the New York Times. This will be the first time the U.N.'s General Assembly hall will be partially filled with representatives of member states since the beginning of the global COVID-19 pandemic. The General Assembly was held virtually in 2020.

This is the fifth time Lee has been appointed to this position, according to a September 9 news release.

"I look forward to continue working with my colleagues to engage with the United Nations as we reaffirm our commitment to peace, security, and lifting up marginalized communities," Lee stated.

Lee thanked Biden for the appointment and House Speaker Nancy Pelosi (D-San Francisco) for her support.

Pelosi praised Lee as a "force for peace and justice," in a September 13 news release.

"She will continue to bring her fierce commitment to strengthen the U.N., advance American values and build a brighter, fairer future for all," Pelosi stated.

Lee said she would focus on global poverty, hunger, education, gender equality, and reproductive rights. Additionally, she said she will also focus on the specific challenges experienced by people of African descent around the globe.

It is unclear what actions Lee will take protecting LGBTQ Afghans trapped behind Taliban lines or other queer asylum seekers and refugees' issues at the U.N.

Lee was one of 64 members of Congress who signed onto gay Congressman Chris Pappas' (D-New Hampshire) call to protect LGBTQ Afghans in an August 24 letter to Blinken.

"Lee's continued work to support development programs, address gender equality and uplift marginalized communities is vitally important at the time," he continued. "We look forward to seeing what she accomplishes."

Lee did not respond to the B.A.R.'s request for comment by press time.

In June, Biden announced Stern's nomination as the second-ever U.S. Special Envoy to Advance the Human Rights of LGBTQI+ Persons at the State Department.

"Maria is the perfect person to steer OutRight during this time of transition," said Jenny Pizer, senior counsel at Lambda Legal Defense and Education Fund and OutRight board co-chair, said in the organization's September 10 news release announcing the appointment.

Pizer praised Sjödin for co-creating "many of OutRight's greatest successes, while also leading the organization's development and communications work through a period of extraordinary revenue growth and media visibility."

"We are extremely fortunate to have in Maria a world-renowned LGBTIQ human rights expert, a skillful manager, and a deeply trusted face of the organization as our acting executive director," Pizer added.

Sjödin has more than 20 years of experience advocating for LGBTIQ equality. Sjödin was executive director of RSFL, Sweden's largest LGBTIQ organization, from 2005 to 2014.

OutRight's COVID LGBTIQ Emergency Fund has now released $3.2 million in grants to 310 queer organizations on the frontlines in 102 countries around the world. The organization has also continued to release groundbreaking reports, such as "Pride Around the World," and more recently an authoritative report on digital censorship.

A transition committee of the OutRight board of directors will manage the search for a permanent executive director for the organization.

Out in the World: Senate questions Biden admin about protecting LGBTQ asylum seekers
Sign up!