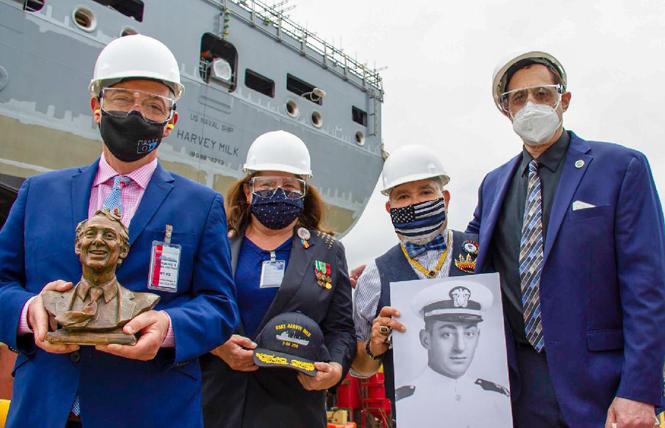 With the Biden administration once again voicing support for LGBTQ rights on the global stage, the U.S. government will soon have a floating soapbox to project its pro-equality stance in ports around the world. The first American military ship named after an LGBTQ icon is set to take its maiden voyage later this year.

The Navy's USNS Harvey Milk, honoring the late gay San Francisco supervisor gunned down 43 years ago this fall, will launch Saturday, November 6, the Bay Area Reporter has learned. It will do so from the General Dynamics National Steel and Shipbuilding Company's shipyard in San Diego where it has been under construction. Various LGBTQ dignitaries and elected leaders from across California are expected to attend the ceremony, slated to begin at 9 a.m. that morning.

Gay San Diego city and county commissioner Nicole Murray Ramirez, who as the Queen Mother I of the Americas and Nicole the Great is the titular head of the court, first thought of the proposal after the repeal of the military's homophobic "Don't Ask, Don't Tell" policy, which will mark its 10th anniversary Monday, September 20. With the navy secretary the lone person who has final say over naval ship names, Murray Ramirez had the court's 70 chapters across North America send letters from its members and local officials in support of a Milk ship.

"First the stamp, now the ship. Though I came up with the idea, it definitely takes a village," said Murray Ramirez, referring to the U.S. postal stamp in honor of Milk released in 2014.

Murray Ramirez had hoped to work with the office of gay San Diego Mayor Todd Gloria, and naval and NASSCO officials on a grand public ceremony to launch the USNS Harvey Milk. But the COVID-19 pandemic has upended those plans, and the event is expected to be a smaller affair.

"I am excited but also devastated it will not be what it could have been," Murray Ramirez told the B.A.R. in a phone interview Tuesday.