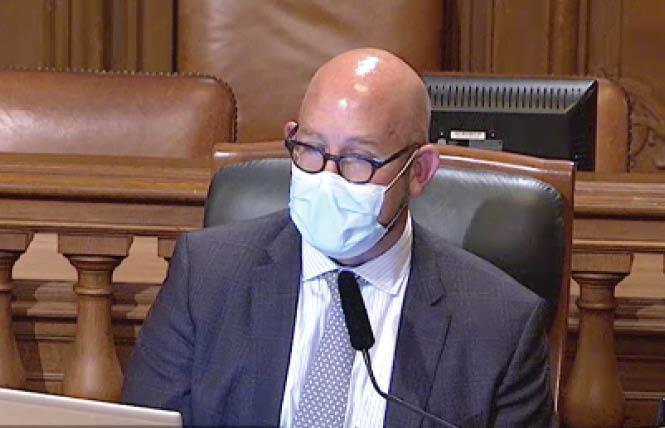 Supervisor Rafael Mandelman spoke at the September 7 Board of Supervisors meeting. Photo: Screengrab

The San Francisco Board of Supervisors unanimously passed a resolution September 14 calling on the state Supreme Court to protect the rights of LGBTQ seniors, particularly those who are transgender or nonbinary, amid a legal battle over requiring employees at senior care facilities to address residents by their preferred names and pronouns.

State Attorney General Rob Bonta, a straight ally, filed a similar petition of review with the state's highest court last month. That came after certain anti-discrimination protections were struck down by a three-judge panel of the 3rd District California Court of Appeal in Sacramento.

In a statement Tuesday to the B.A.R., Mandelman said that the city's elected representatives have spoken loud and clear.

"Today's unanimous vote sends a strong message that the San Francisco Board of Supervisors will not stand by while the rights of our LGBTQ seniors are rolled back," Mandelman stated. "The intentional misgendering of trans and gender-nonconforming people is a harmful act that no one, especially vulnerable people living in long-term care facilities, should face. I hope that the California Supreme Court will put an end to this harm and restore all of SB 219's protections for LGBTQ seniors and other long-term care facilities in California."

In the case of Taking Offense v. California, the three-judge appellate panel came to a unanimous decision that these protections — which had required long-term care staff to refer to facility residents by their preferred names and pronouns — imperiled freedom of speech and the free exercise of religion.

Wiener stated to the B.A.R. September 14 that, "I'm grateful to the Board of Supervisors for standing up for trans seniors and for our legislation to protect them. We need to make sure this terrible legal ruling gets fixed."

The appellate court panel "failed to acknowledge the serious harm caused by the intentional misuse of transgender people's names and pronouns," the resolution states, concluding with the instruction that if passed by the board, the clerk should transmit a copy to the state Supreme Court.