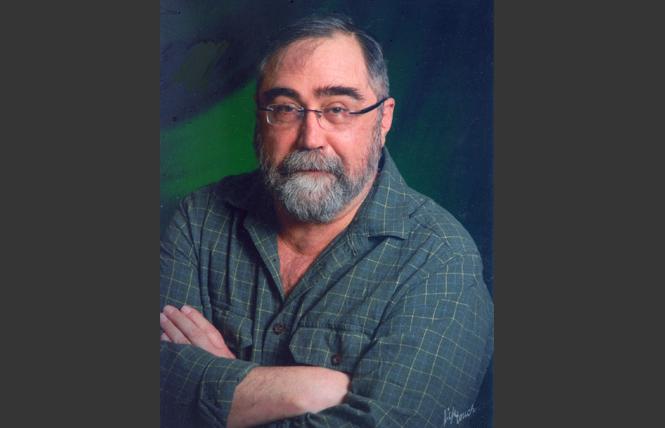 When the COVID-19 shutdown began in the spring of 2020, I posted on Facebook that I expected the pandemic to be, for me, a pain in the ass, a royal pain in the ass. I am a long-term (pre-highly active antiretroviral therapy, or HAART) survivor of AIDS. I lived through the first 15 years of the AIDS epidemic at ground zero in the Castro district of San Francisco. I was infected in 1981 and diagnosed with full-blown AIDS in 1991. In the early years it was assumed that 100% of the gay men in San Francisco were infected and that 100% of us would die from AIDS. Having lived so many years of my productive adult life with an assured early demise, COVID couldn't possibly be more than a "royal pain in the ass."

In the 1980s then-President Ronald Reagan tried to ignore AIDS out of existence, and has been forever despised by the gay community for failing to say the word "AIDS" in public until 1985. Many gay men worried our newfound open sexual expression — having too much sex — was the cause of AIDS. Some suspected AIDS was a government plot to kill homosexual men. The evangelical right seized upon AIDS as God's judgment of homosexuals and our lifestyle. AIDSphobia became rampant and, even today with the "undetectable = untransmittable" information campaign, AIDSphobia remains distressingly widespread, even in the LGBTQ community.

When the COVID-19 virus began spreading across the globe, its potential dangers were quickly known by the Chinese government and the knowledge suppressed. Even as COVID-19 started to devastate Americans, then-President Donald Trump withheld the truth from the American public. In the face of emerging facts, Trump and his supporters lied. They lied and lied and lied. When the right had demonized AIDS as just punishment for the afflicted Other, this same segment of the American people now demonized science and facts, and public health officials' recommendations, as lies, as efforts of rob them on their constitutional right to control them, to do whatever they want. This response was made possible by Trump and his cadre's politicization of everything, including the health of the nation. While gay men dramatically changed their sexual habits (something that had never happened before), even giving it up for years, to protect themselves and others, much of the evangelical right and all of the Trumpite Republicans have refused to follow public health guidelines. Wearing a face mask is now a public statement, not a health precaution. Gathering in crowds and social distancing are encroachments on personal freedom. Getting vaccinated is a personal choice, even in the face of nearly certain infection and possible death. It has now become a constitutional right to kill others in complete anonymity and with no consequences. Even the chance to win $1 million (the appeal to greed) is not enough to persuade anti-vaxers.

In the European Middle Ages, the Black Death led to the death of nearly half of Europe's population. People lost faith in the Roman Catholic Church, which changed the world profoundly, leading to the world we have been living in since then. Disease overthrew an entire social, political, and economic order. Susan Sontag, in her seminal "Illness and Its Metaphors" (1978), demonstrated that how we assign meaning to illness defines how we react to it. Her later "AIDS and Its Metaphors" (1988) was even more germane to me: it deconstructed how I had become a "diseased pariah." When I took the first test for "exposure to HITV-III virus" in 1986, my result was positive, as expected. The clinician at UCSF told me I was in the "highest risk" category and they could not explain why I was not already dead. Today, I am once again in the "high risk" category — over 65 and living with a compromised immune system. However, I feel far safer today. I stopped counting the number of people I knew who died of AIDS when that reached 500. A year and a half into the COVID pandemic only two people I knew have died. AIDS profoundly altered my gay world — the world I knew and the life I led then are now distant history. I have survived one revolution. And I started over.

The COVID pandemic continues to rage on, in one wave after another, as I write today in 2021. The entire world has entered into the next profound change in the social, political, and economic order. Randy Shilts blamed the outbreak of AIDS in the U.S. on his Patient Zero, a "promiscuous" gay French-Canadian flight attendant. Trump blames COVID on secret Chinese forces in a Hunan medical lab, demonizing China. AIDS began as a "gay disease," COVID has begun as a "Chinese disease." It is yet to be seen how COVID will be metaphorized. There is still no vaccine or cure for AIDS. Vaccines for COVID-19 were developed and deployed in under a year. AIDS is still endemic in parts of the world, where medical treatment remains unaffordable to most and having AIDS remains a stigma, as much of the global population has wearied of endlessly repeating shutdowns. In the U.S. more and more people are turning hostile, throwing tantrums on airplanes, berating wait staff (who are quitting their jobs in increasing numbers), and shooting store employees because they will not be told to wear a face mask. Giving up sex and wearing a face mask are not exactly comparable.

So, what will emerge? As Ben Rhodes describes in "After the Fall" (2021), for the last 30 years the world has been descending into a frightening (from the democratic, Western point of view) failure of globalization, the rule of oligarchs everywhere, the spread of neo-fascism, the rise of technology-driven authoritarianism, and the ascent of China as the leading world power. In the current leading world power everything has been politicized. Truth is a matter of opinion. The government is incapable, or unwilling, to assert public health policies on an ever-more hostile population. Politicizing a pandemic will not end it. In China the government imposes a strict and strictly obeyed shutdown. If people in a democracy do not want to save themselves, there's no telling what we are to do.

Les K. Wright, Ph.D., is a retired professor of English and German, gay historian, and gay activist. He is an economic refugee from San Francisco, now living in rural upstate New York.