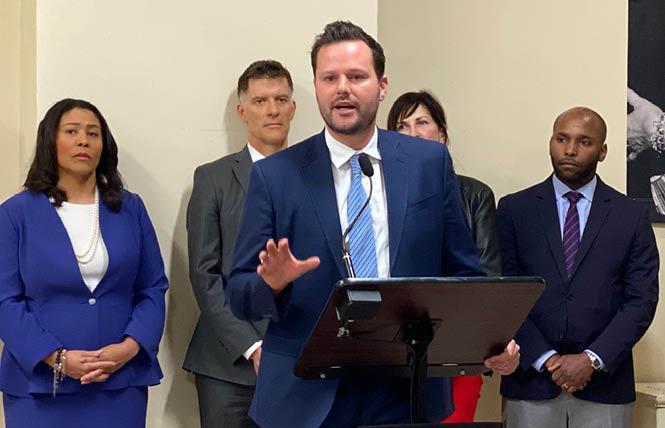 San Francisco Supervisor Matt Haney's office is coordinating a hearing on his resolution urging Mayor London Breed to proclaim "a local emergency around the overdose crisis" — and to implement overdose prevention sites.

The supervisor's office is seeking the resolution be heard by the Public Safety and Neighborhood Services committee, on which Haney sits alongside District 4 Supervisor Gordon Mar and District 2 Supervisor Catherine Stefani. A date has not yet been set.

The resolution is the fulfillment of a promise by Haney, who represents District 6, which includes the Tenderloin and South of Market neighborhoods, to gay activist and policy analyst Gary McCoy. As the Bay Area Reporter reported last month, McCoy held a hunger strike outside San Francisco City Hall from August 1-3 demanding that local leaders take action to declare a state of emergency to facilitate the authorization, funding, and implementation of safe consumption sites (termed "overdose prevention sites" in Haney's resolution).

McCoy, who once battled drug addiction himself, ended his hunger strike when he got commitments from a majority of the board to support a resolution to that effect. Haney had been proposing the same idea for years.

McCoy told the B.A.R. that whatever you call them, the sites have to open to save lives.

"I appreciate Supervisor Haney for introducing a resolution supporting a declaration of emergency on the overdose crisis by Mayor Breed, and glad to see Supervisor [Rafael] Mandelman co-sponsor this resolution as well," McCoy stated. "Safe consumption sites, or overdose prevention sites, have been discussed and championed by so many folks across our San Francisco political spectrum, advocates, and people who use drugs for quite some time now — it's time we finally open these sites. We can't continue to lose an average of more than two San Franciscans a day to overdose."

McCoy, a former district office staffer for House Speaker Nancy Pelosi (D-San Francisco), is currently director of policy and public affairs for HealthRIGHT 360 and co-chair of the Alice B. Toklas LGBTQ Democratic Club.

Mandelman, who represents District 8 (the LGBTQ Castro neighborhood and surrounding areas) on the board, told the B.A.R. that he is glad to partner on the resolution.

"I support it and am co-sponsoring it," the gay supervisor stated. "We have a serious drug crisis in San Francisco, we lost more than 700 San Franciscans to overdose last year, and we need to do everything we can both to reduce the use of drugs like fentanyl and meth and keep those who are using alive."

Accidental drug overdoses claimed 697 lives last year in San Francisco. As of June 30, 2021, there were 344 additional accidental overdose deaths in the city, meaning the number of deaths this year is on track to be about the same as last year. The city made international headlines for losing more people to drug overdoses in 2020 than to COVID-19, for which Mayor London Breed declared a state of emergency before a single death had been reported in San Francisco.

Legislation authored by gay state Senator Scott Wiener (D-San Francisco) that would remove the current state prohibition and allow local authorities to decide whether to open safe consumption sites on a pilot basis in San Francisco, Oakland, and Los Angeles has been stalled until at least 2022.

Speaking to his colleagues at the September 7 meeting of the Board of Supervisors — the first since McCoy's hunger strike, which occurred during its summer recess — Haney said that "what we are proposing is not a radical new idea."

"One hundred overdose prevention sites now operate in over 65 cities around the world. No site has experienced an overdose death and many have transitioned thousands of people into treatment and detox services," Haney said. "We all know that this is the right thing to do, and we all know that it makes financial sense. It's time for San Francisco to urgently implement this proven tool, as part of a broader multi-pronged, comprehensive strategy, to stop overdoses and save lives.

"All available effective means should be deployed to prevent these deaths," Haney argued, because "what we are doing now is not enough."

Wiener and Breed's offices did not return requests for comment.

Editorial: Breed should get behind OD emergency
Sign up!