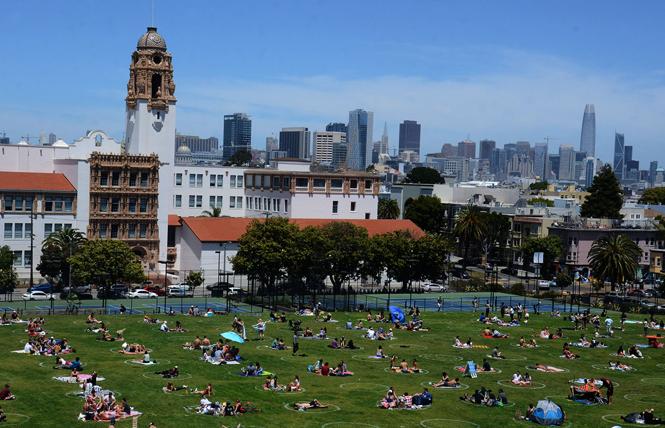 Mission Dolores Park in San Francisco has a rich history and people can learn all about it at the Dolores Park History Day Saturday, September 18, from 11:30 a.m. to 4 p.m.

The history day is sponsored by the San Francisco Recreation and Park Department's Love Dolores program and the Dolores Park Ambassadors, a neighborhood group dedicated to keeping Dolores Park clean and safe, a spokeswoman for Rec and Park stated.

Activities at the park, located on the western edge of the Mission district, feature a timeline of Dolores Park's history laid out at multiple stations. Parkgoers can visit a station and talk to a volunteer and learn more about events and people, like the Native peoples who lived in the area or how the 1906 earthquake affected the park (no word on whether they'll be a special station about the recent history of the pissoir that an anti-gay group sued the city over — and saw dismissed by a judge — several years ago). At the "Love Dolores" station, visitors can pick up a map and "passport," which if validated at all six stations can be returned for free give-away items.

History Day is free and open to all.

EQCA to honor B.A.R., AG Bonta
The Bay Area Reporter and state Attorney General Rob Bonta will be honored by Equality California at its San Francisco Equality Awards event Friday, September 10, from 7 to 10 p.m. at the California Academy of Sciences, 55 Music Concourse Drive.

This is the statewide LGBTQ rights organization's first in-person event in San Francisco in over a year. The 2020 event moved online due to the COVID-19 pandemic.

The B.A.R. is being recognized on the occasion of this year being its 50th anniversary. Bonta, who was named attorney general earlier this year by Governor Gavin Newsom, is being honored for his many pro-equality actions. For example, just recently, he asked the California Supreme Court to review a lower court decision that stripped anti-discrimination protections from the state's LGBTQ Senior Bill of Rights. That law, authored by gay state Senator Scott Wiener (D-San Francisco), became effective in 2018.

Bonta became the state's top law enforcement official following the resignation of former attorney general Xavier Becerra, who became secretary of health and human services in the Biden administration. EQCA's gala is likely to be the first LGBTQ event for Assemblywoman Mia Bonta (D-Oakland), sworn in September 7 after winning last week's special runoff race to serve out the remainder of her husband's Assembly term through next December; she will need to run for a full two-year term in 2022.

Attendees at the EQCA event will also hear from outgoing Executive Director Rick Chavez Zbur, who is leaving the post at the end of the year to campaign for an open state Assembly seat in Southern California, and incoming ED Tony Hoang.

Attendees must provide proof of COVID vaccination. If someone has an exemption due to religious or medical reasons, they must have a negative COVID test within 72 hours.

Tickets for the EQCA awards are $500 and can be purchased here.

Voting centers open in SF, South Bay
If you want to return your California recall ballot in person, voting centers are open in San Francisco and Santa Clara counties.

In San Francisco, the voting center at City Hall, 1 Dr. Carlton B. Goodlett Place, and outdoor ballot drop-off stations will be open every day through Tuesday, September 14, the deadline to vote whether to remove Governor Gavin Newsom from office. (A second question asks who should replace him and includes 40-plus candidates. Newsom, who's in his third year of his first four-year term, is barred from running as a recall candidate.)

The outdoor drop-off centers are located at the corner of Grove and Polk streets, and across the street from the City Hall main entrance, along Civic Center Plaza. The voting center is inside City Hall.

In the South Bay, Santa Clara County people can now cast ballots in person at vote centers or deliver their ballots to drop boxes. According to a news release, 36 vote centers will be open for multiple days throughout the county, operating through September 14.

To find out locations of drop boxes and vote centers, click here.

The release noted that the postcards are easy to read and include a convenient QR code that can be scanned directly from the prospective jurors' smartphone or tablet. The code links directly with jury reporting instructions or to the court's website should a person need to submit a request to be excused from jury service.

The new cards replace the multi-page summons that were issued in the past. The court noted that prospective jurors can carry the cards with them if they are instructed to report for jury service. The postcards should begin arriving in mailboxes in mid-September, the release stated.