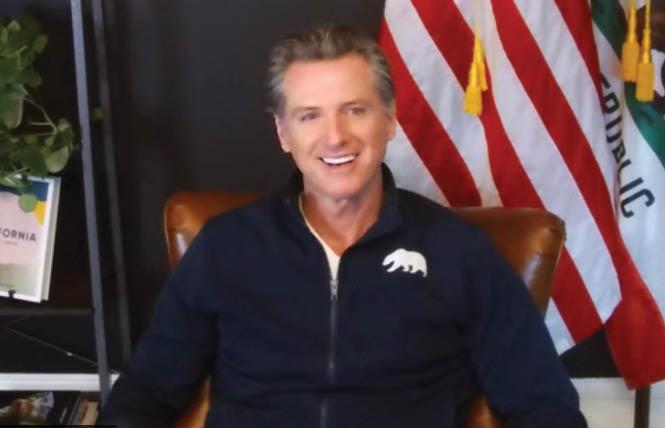 An animated and impassioned Governor Gavin Newsom took to Zoom Friday in a call with LGBTQ leaders to make his case against the recall and warned that if it passes, a Republican replacement would "turn back the clock" on a host of issues.

In pointed remarks about Larry Elder, the Republican talk radio host who is leading the field of 40-plus candidates vying to replace Newsom, the governor said that Elder would take the state back decades.

"I don't want to go back to the 1990s. Larry Elder remembers it," Newsom said, referring to laws such as three strikes and those that targeted immigrants. "In 1994-95 the number one debate by the UC Regents ... was about eliminating affirmative action."

Newsom said that the current recall election is the sixth effort against him since he took office in January 2019. Those earlier attempts did not qualify for the ballot, but this latest one did and Golden State residents have until September 14 to mail in their ballots, drop them off, or vote at designated centers in their counties.

The recall ballot asks two questions: whether Newsom should be removed from office and then a vote for one of the candidates to replace him. The California Democratic Party, Newsom, and many others have urged people to vote no on the first question and to leave the second one blank. Newsom, who's in his third year of his first four-year term, is barred from running as a recall candidate.

"We have a governor who's our champion," said gay San Diego Mayor Todd Gloria. "I encourage every Californian, LGBTQ or not, to vote no on the recall and mail it back."

LGBTQ rights
Newsom has broad support in the LGBTQ community. It dates back to his time as San Francisco mayor when, in 2004, he ordered city officials to issue marriage licenses to same-sex couples in violation of the law at the time. Several of the speakers praised Newsom's leadership, saying that he stood with the community years before same-sex marriage became a popular issue for Democrats.

Newsom briefly reflected on what became known as the "Winter of Love," saying "2004 was special; 4,036 couples from 46 states and six countries came to San Francisco. And all they did ... was say two powerful words, 'I do,' They expressed their love and faith and devotion to each other."

The late lesbian pioneers Phyllis Lyon and Del Martin were the first couple to be married by Newsom that day. He said that he and city officials didn't expect the weddings to continue.

"None of us knew days would become weeks," he said of the monthlong march to City Hall by same-sex couples.

Tiffany Woods, a trans woman who is co-chair of the LGBTQ Caucus of the California Democratic Party, summed up the view of many on the call.

"We've never forgot that you stood up for marriage equality," said Woods, who served as moderator of the call. "He wants to advance LGBTQ rights."

"He's the kind of executive who makes waves — and the governor kind of has that surfer look," Takano quipped, before turning serious. "He systematically provoked change; 2004 wasn't a stunt. It really advanced the LGBTQ community to become full and equal citizens of their country."

Of Trump, Takano said that Newsom "resisted where he needed to."

Gay state Senator Scott Wiener (D-San Francisco) praised Newsom for the many LGBTQ-related bills he has signed, including some that were controversial.

"You've stood up and not only when it's easy," Wiener said, referencing his Senate Bill 145 that Newsom signed last year. The bill ends discriminatory treatment of LGBTQ young adults faced with registering as sex offenders; Wiener himself faced death threats and was subjected to anti-Semitic harassment from followers of the QAnon conspiracy theory for months due to the policy change.

Newsom said that his work is not done. "There's so much to do to protect our trans brothers and sisters. I'm committed to that cause," he said.

Women's rights
Newsom referenced Texas' new law that bans most abortions in the state. On Wednesday night, the U.S. Supreme Court left the law intact on a 5-4 vote, with Chief Justice John Roberts siding with the three liberal justices.

"Elder celebrates what happened in Texas," Newsom said, adding that if Elder becomes governor he could sign on to an amicus brief with other states that have proposed similar sweeping anti-abortion laws. "He doesn't back maternity leave and believes employers have a right to ask women about their reproductive future."

"This is a profound and consequential race," Newsom said. "I've got four kids — I've got two daughters. I love this state."

Newsom repeatedly criticized Republicans, who he said are behind the recall effort. It predates the COVID-19 pandemic, he said, adding that it was sparked by his strong condemnation of Trump's immigration policies.

"We stood up — truly united as Democrats — to push back on Trump and Trumpism," Newsom said. "We filed over 100 lawsuits. We didn't just resist ... we're willing to challenge the norms and lean in."

The governor said that GOP stalwarts like former House Speaker Newt Gingrich and former Arkansas governor Mike Huckabee have been promoting the recall on national conservative networks such as Fox News, Newsmax and One America News.

"Mike Huckabee is obnoxious and has been against LGBTQ rights" for years, Newsom added. "He's doing fundraising for the recall."

COVID
The rhetoric among recall proponents shifted to the COVID pandemic and Newsom's actions surrounding it after the lockdown last year. Newsom defended his decisions, such as the recent mask and vaccine mandates for public schools, state workers, and others.

"Today, 1,300 Americans are dead in Florida [due to COVID]. That's 10-fold what California reported today," Newsom said. "On Day 1, Elder would eliminate the mask mandate in public schools and the vaccine requirement. He's walking us over the same COVID cliff" as Florida and other red states. "California has the lowest case rates and the highest vaccine rates. We're making progress. These folks have a chance to turn back the clock. That cannot happen."

Brendalynn Goodall, a Black lesbian who is the former president of the East Bay Stonewall Democratic Club, was one of the dozens of LGBTQ leaders on the call. In a follow-up email, she said that Newsom "has kept the state safe."

"We can't afford to have a Republican come in and dramatically go backward policy-wise regarding COVID issues, climate change, aging, immigration, and dealing with the diverse needs of our state," wrote Goodall, an elected member of the Alameda County Democratic Central Committee.

Newsom pointed out that Elder could appoint conservative judges throughout the state, including its highest court.

The Elder campaign did not immediately respond to a request for comment.

Getting out the vote
Because every registered voter in the state received a mail-in ballot, Newsom talked about "turning in the vote" before September 14.

Recent polling has found that conservatives have had difficulty in expanding their base of support for ousting Newsom, but several earlier surveys have shown a very close race on the first question of whether to remove Newsom from office.

In response to a question from outgoing Equality California Executive Director Rick Chavez Zbur, Newsom said the gap was beginning to close, but urged people to mail in or deliver their ballots.

"They're counting on low turnout," the governor said of his opponents, particularly since it's an off-year election. He said that he'd be touring the state over the next eight days, including a rally in Los Angeles Saturday, September 4, with Massachusetts Senator Elizabeth Warren (D). She appeared in a series of television ads urging people to vote no on the recall. Senator Bernie Sanders (I-Vermont) has appeared in recent TV ads in the Bay Area and elsewhere.

"We're doing more," said Newsom, who is also expected to campaign alongside President Joe Biden in the coming days.

Goodall said that for her, the choice is easy.

"We can't take it for granted, I am so hoping that the recall will be defeated," she stated. "It's clear that it's in our best interest that people need to vote. Newsom has been a champion of LGBTQ issues and I wholeheartedly support him."