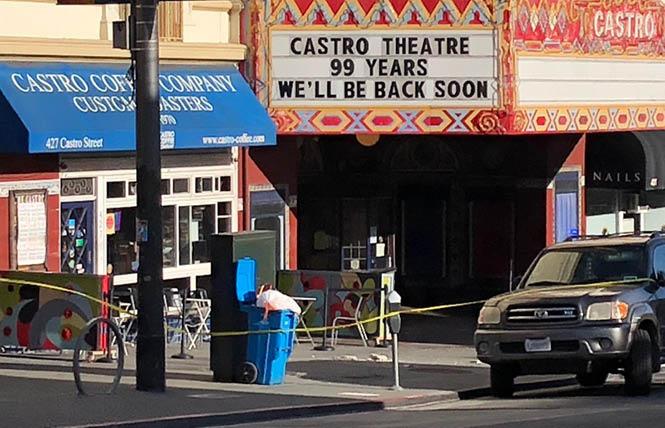 Detritus is observed on the sidewalk of Castro Street after a man allegedly threw the items from the roof of the Castro Theatre. Photo: Matthew S. Bajko

San Francisco police have announced the name of a man they arrested on suspicion of damaging the iconic sign at the Castro Theatre August 31 during a standoff.

Wiliam Quezali, 33, was booked into San Francisco County Jail for three counts of vandalism and trespassing, according to Officer Robert Rueca, a public information officer with the San Francisco Police Department.

The incident happened during happy hour Tuesday, leading to a 90-minute street closure.

"Castro Street is closed today for some weird excitement," Mark Abramson wrote on Facebook. "One of the local 'characters' got on top of the Castro Theater marquee, stripped naked and jacked off, and then changed clothes a couple of times. The crowd was supportive of him until he climbed the Castro sign and kicked the neon lights. Then it was, 'Not the NEON!! Shoot him!'
I hope he gets the help he needs, but Jeez! Really???"

Rueca stated to the Bay Area Reporter that police responded to reports that someone broke into the theater, which has been a neighborhood staple for 99 years.

"Officers arrived on scene and observed an unknown male subject climbing on the side of the building and made his way to the roof," Rueca wrote in an email. "The subject made incoherent statements, removed his clothes, and proceeded to touch his genitals. Additional officers arrived on scene to set up a perimeter to prevent the subject from gaining access to the theater or any surrounding buildings. Pedestrian and vehicle traffic were diverted away from the incident to prevent exposure to any potential danger. Additional police resources arrived on scene to assist in negotiating a peaceful resolution to the incident."

Thomas McDonald happened to be at historic Castro bar Twin Peaks when the incident began.

"We saw the officers start blocking the street with cars," McDonald said. "Once I realized what was going on, I let one of the guys who works at the Castro know that someone was on top of the marquee and starting to climb the sign."

A B.A.R. reporter observed the suspect throwing bricks or cinder blocks from the roof of the theater's facade. According to bystanders on the scene, he kicked off the neon tubing. McDonald reported that he saw the suspect "climbing the sign to the roof and breaking some of the neon light."

"It's raining bricks," one bystander, who did not want to be quoted by name, told the B.A.R. reporter.

Detritus from the damage was visible on the Castro Street sidewalk as the suspect surrendered.

"During this incident the subject damaged the theater neon sign and threw a heavy object to the street," Rueca stated. "Eventually the subject climbed down a ladder provided by SFFD. Officers immediately detained the suspect whom for which they developed probable cause to arrest."

"This could have been a whole lot worse but thanks to the brave folks at the SFPD and SFFD no one, including Wiliam Quezali, was seriously hurt during this incident," Mandelman stated, referring to police and fire personnel. "However, it is enraging that someone who was written about for doing this same sort of thing by Phil Matier back in 2013 has not gotten the treatment necessary to keep themselves and others safe. It is situations like this that make many San Franciscans, myself included, question what our public health and public safety departments have been doing to help sick people like Wiliam over the past decade."

Indeed, a 2013 column co-authored by Matier — headlined "S.F. naked felon in and out of psych ward" — recounts numerous incidents of Quezali being picked up by police, including for fighting with store security at the upper Market Street Safeway.

Owners of the Castro Theatre did not respond to a request for comment.

Updated, 9/2/21: This article has been updated with comments from District 8 Supervisor Rafael Mandelman.