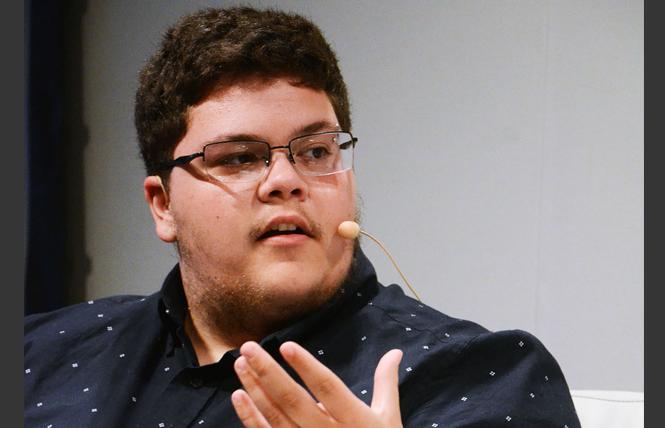 The Gloucester County School Board in Virginia may have wanted to stop trans students from using the restrooms that match their gender identity in its schools, but it turned out to be an expensive lesson. Last week, in a fitting end to a lawsuit brought by former high school student Gavin Grimm, the school board was ordered to pay over $1.3 million in attorney's fees and costs associated with the discrimination case. The money will go to the American Civil Liberties Union, which represented Grimm during the yearslong legal ordeal. Grimm wrote on Twitter that he will receive a symbolic $1 settlement. (This fact has been erroneously reported in some outlets, implying that Grimm will receive all the money. He will not, he stated.)

Represented by the national ACLU and the ACLU of Virginia, Grimm sued the school board in 2015 for discriminating against him in violation of the equal protection clause and Title IX of the U.S. Education Amendments of 1972, a federal law prohibiting sex discrimination by schools. As the ACLU noted in a summary of the case on its website, "After four years of litigation — including a trip to the Supreme Court and back — the U.S. District Court for the Eastern District of Virginia ruled in favor of Gavin on all his claims."

The 4th U.S. Circuit Court of Appeals affirmed the ruling in favor of Grimm on August 26, 2020. In June of this year, the U.S. Supreme Court denied the school board's petition to appeal that ruling, effectively ending the case.

As we previously reported, Grimm, who has since graduated high school, had filed suit after he began transitioning and sought use of the boys' restroom because he said girls reacted negatively to his presence in the girls' restrooms because they perceived him to be a boy.

School officials initially accommodated Grimm's request, but the school district intervened after some parents complained. As the ACLU noted, the school board adopted a discriminatory new policy prohibiting boys and girls "with gender identity issues" from using the same common restrooms as other boys and girls. The new policy directed Grimm to an "alternative appropriate private facility" instead. That, of course, was problematic, as Grimm was forced to use separate restrooms that no other student was required to use. "That degrading and stigmatizing policy singled Gavin out as unfit to use the same restrooms as every other student," the ACLU stated. "The board continued to exclude Gavin even after he began receiving hormone therapy (which altered his bone and muscle structure, deepened his voice, and caused him to grow facial hair), obtained a Virginia state ID card listing his sex as male, underwent chest reconstruction surgery, obtained a court order legally changing his sex to male under Virginia law, and received a new Virginia birth certificate reflecting that his sex is male."

The ACLU pressed Grimm's case and won, with the 4th Circuit repeatedly ruling in Grimm's favor. In the latest go-round earlier this year, the 4th Circuit again sided with Grimm, this time citing the Supreme Court's ruling last year in Bostock v. Clayton (that "sex discrimination" under Title VII of the federal Civil Rights Act includes sexual orientation and gender identity). The appeals court said the same logic should apply to the federal law prohibiting sex discrimination in education.

The transphobic treatment of Grimm by the Gloucester board didn't end with school restrooms. The ACLU stated that the board continued to discriminate against Grimm even after he graduated. The board refused to provide him with a transcript that matches the "male" sex designation on his birth certificate. As a result, whenever Grimm was required to provide a transcript to colleges or potential employers, it identified him as "female." That's disgusting and shows that the Gloucester school board's continuous mistreatment of Grimm was steeped in transphobia, plain and simple. (In California, Assemblyman David Chiu, D-San Francisco, passed a bill that bans public K-12 schools from deadnaming trans and nonbinary students and now has a similar bill headed to Governor Gavin Newsom's desk that would apply to college and university documents, including diplomas.)

Grimm is now a member of the ACLU's national board of directors. And he has spoken out over the years against anti-trans discrimination and about how it was the adults who mistreated him. The elected members of the Gloucester school board should be ashamed of the way they handled this; from beginning to end it is a textbook case of how not to treat transgender or nonbinary students. The school board now has 1.3 million reasons to treat all students fairly, and reject transphobia.