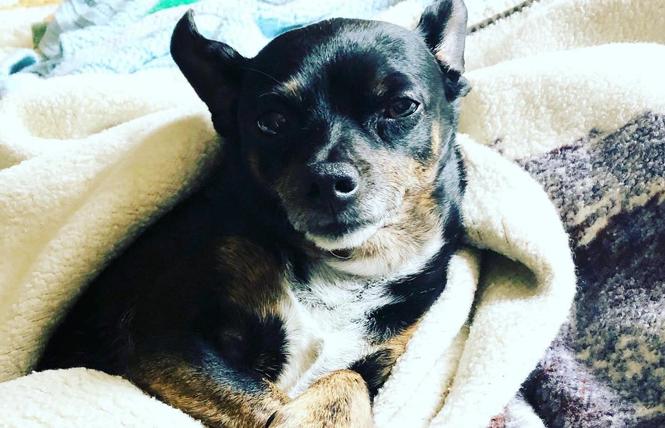 A San Francisco hospice for people living with HIV/AIDS is seeking pets from community members for its upcoming calendar.

Maitri Compassionate Care is going to do the "Mutts and Meows Charity Calendar." In an email to supporters, the agency noted the calendar will help "everyone enjoy the companionship of our community's pets while raising critical funds to support our mission of compassionate care."

The calendars will feature 13 pets from supporters, volunteers, staff, and clients. In addition to serving those with HIV/AIDS, Maitri also provides care for those recovering from gender affirmation surgery, its website noted.

People interested in sponsoring the calendar can email their name, pet's name, and two or more pet photos (themed pictures are encouraged). Winning pets and their owners will be entered into a raffle for prizes and receive their own calendar. Photos should be of pets only — no people. The information should be emailed to info@maitrisf.org. For more information, click here.

Castro cultural district to hold weekly COVID test, vaccine hub
The Castro LGBTQ Cultural District has announced that it will be providing testing and vaccinations for COVID-19 on a weekly recurring basis. The testing and vaccination hub takes place every Saturday, from 11 a.m. to 5 p.m., on Noe Street between Market and Beaver streets.

According to a news release, the program is a collaboration with the COVID-19 Task Force and Command Center, San Francisco Department of Public Health, Virus Geeks, Castro Merchants Association, the health department's sexual health program, and the San Francisco AIDS Foundation.

The district's release stated that "The existing narrative based on residential statistics has been that the Castro has neither needed vaccine or testing because affluent white cis gay men have insurance. Unfortunately, this narrative ignores the regular influx of our community at large, especially on the weekends, many of whom are members of our community who need this access. Our district's centrality and location on major transit can help us reach those who need resources, vaccines, and testing the most and help us in our work of reshaping inclusivity and equity in the Castro."

Tina Valentin Aguirre, cultural district manager, thanked the groups that are helping in the effort and encouraged people to stop by on Saturdays.

"Please come out, get tested, and encourage your friends to do so too," they stated. "We will continue with these efforts as long as people need access to them. Wear masks, social distance, get vaccinated, and please keep getting tested. Together, we will get through this."

Historical society mandates vaccinations for museum, archives
The GLBT Historical Society has instituted a mandatory vaccination policy for all visitors to its museum in the Castro and its archives in downtown San Francisco.

Mark Sawchuk, communications manager, stated in an email that the nonprofit soft-launched the requirement the same day that Mayor London Breed's policy went into effect August 20 and it is now formally being implemented.

The GLBT Historical Society Museum, located at 4127 18th Street in the Castro, is open Tuesday through Sunday. Capacity is limited due to COVID restrictions, and people are encouraged to reserve tickets online in advance, according to the website.

The website states that the archives and research center, located at 989 Market Street, lower level, is allowing in-person research appointments on a limited basis.

According to an email sent to supporters, the board considered many factors in its decision, including concerns related to the COVID-19 pandemic and the highly contagious Delta variant. The board also nixed having a virtual show, in part because of not doing the contestants' artistry and talent justice, and decided against an outdoor event.

"The show, of course, will go on," the email stated. "It is just a question of how, and when, and where. The organizing committee has come to a consensus that we will wait however long we need for Runway to be an in-person production."

GAPA does have other events planned for the fall. For more information, click here.

A benefit for the San Francisco AIDS Foundation and the Los Angeles LGBT Center, the 545-mile bicycle ride from the city to L.A. typically brings in millions of dollars for the two nonprofits.

Update on what was believed to be tape from Milk's parents
After working to authenticate a donated audio cassette tape that donors believed featured the parents of the late San Francisco supervisor Harvey Milk, officials at the San Francisco Public Library's history center have concluded the tape is for a different Harvey and has no connection to Milk or his family.

As last week's News Briefs reported, library officials were awaiting authentication of the tape, which was donated by gay longtime activist Michael Petrelis.

Kate Patterson from the San Francisco Public Library emailed the Bay Area Reporter after last week's paper was published to state that the tape is not from anyone affiliated with Milk. "We confirmed this with his biographer, Lillian Faderman, and a family member," Patterson stated.

In an email to the donors, Tim Wilson from the library wrote, "So, I'm sorry to say that this tape does not appear to be from Minerva and William Milk to Harvey Milk."

"Frankly, there is no reason to have regrets that this cassette is not from Milk's parents because we all acted in good faith," Petrelis wrote in response to Wilson's email.

"I believe I speak for my friends when I say we would not want this tape to elude authentication or be added to the library's archive since the audio letter was to a different Harvey," Petrelis added.

The online version has been updated.