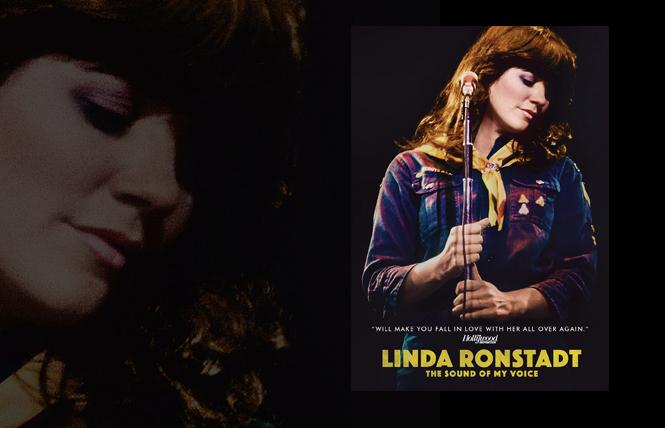 As is so often happens in life, we don't fully appreciate something until it's been lost. That becomes apparent in the new documentary "Linda Ronstadt: The Sound of My Voice," just released on Blu-ray by Kino Lorber. In it, we are reminded of the loss of Ronstadt's incredible voice due to progressive supranuclear palsy (not Parkinson's disease), her gifts not fully appreciated until they were gone. Directed by gay filmmakers Rob Epstein and Jeffrey Friedman ("The Times of Harvey Milk," "Celluloid Closet"), "Sound" is not a standard bio-pic but more a celebratory portrait of the artist, with intermittent voiceover by Ronstadt, mostly in the nostalgic beginning and the bittersweet finale. It took three attempts by Epstein/Friedman to convince Ronstadt, 73, to green-light their project. Fans and those lucky few discovering her immense talents for the first time will be glad she reluctantly said yes.

Ronstadt was born to sing, growing up in a musical family from Tucson. Her Mexican-German father, a wealthy machinery merchant, professionally sang Mexican songs. The family listened to the radio and records, singing constantly, all types of music. From the start, she blurred the lines between genres. For her, the song mattered, not how it was classified. Her career began when she moved to LA at age 18. Performing at the legendary Troubadour club, she became a member of the Stone Poneys, a folk-rock trio that produced the 1967 hit single "Different Drum." Capitol signed her as a solo artist, releasing her first alternative country album in 1969. She was difficult to classify, as her tastes were wide-ranging. To quote her friend Dolly Parton, "Linda could literally sing everything!" With her girl-next-door looks (the first female singer cover on Rolling Stone), she was "what Beyonce is now: the first female rock star," according to Bonnie Raitt. Though not a songwriter, her versions of hits "Heat Wave," "When Will I Be Loved" and "Desperado" became definitive.

The documentary reflects the difficulties of being a feminist trailblazer in a male-dominated industry. Her achievements are massive: 10 Grammys, 11 platinum-selling albums, the first artist to reach #1 on the pop, country, and R&B charts simultaneously, selling out huge arenas to become her era's highest-earning female singer. A kind-hearted perfectionist, she succeeded on her own terms, but always in service to the music.

By the early 1980s she sensed her kind of "rock" music was losing favor. Every time she wanted to shift her career in a different direction, record executives warned it would be ruinous. Yet the new music brought her more acclaim, sold more albums, and reached larger audiences. Hence, she did "The Pirates of Penzance" operetta on Broadway (Tony nomination) followed by the movie; sang the great American songbook standards on three albums with the brilliant arranger Nelson Riddle; joined her friends Emmylou Harris and Dolly Parton on two Americana records; sang traditional Mexican music to produce the highest-selling Spanish-language album ever, then returned to pop with an artistic collaboration with New Orleans singer Aaron Neville. Her choices were eclectic, yet her voice always projected vulnerability, sexiness, and independence. She stopped singing professionally in 2009, but just received the Kennedy Center Lifetime Achievement award.

Ronstadt's private life is dealt with gingerly. In the mid-70s she abused diet pills and became stressed over touring. She had romances with George Lucas and Jim Carrey, but here only her early relationship with singer-songwriter J.D. Souther and later Governor Jerry Brown (not interviewed) are profiled. The documentary argues that Ronstadt as a vocal stylist has never got her full due. Performance footage confirms her gifts. Asked why she sings, Ronstadt replies, "It's the same reasons birds sing: for a mate, to claim their territory or to give voice to the delight of being alive in the midst of a beautiful day, so subsequent generations won't forget what the current generation endured, dreamed, or delighted in." Thanks to this affectionate tribute, new generations will fall in love with her voice. Ronstadt need never fear being forgotten.