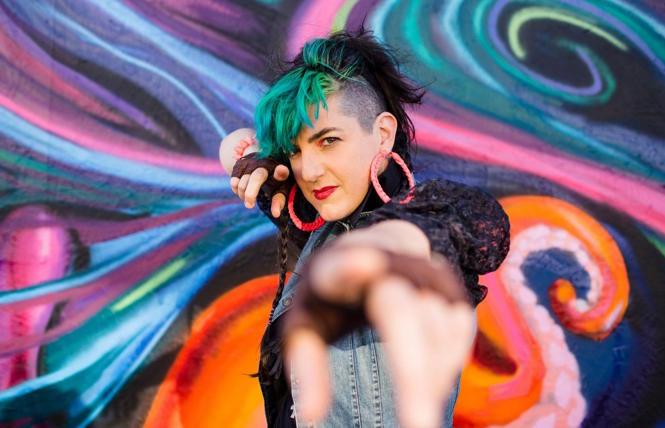 If patience is a virtue, then Bitch fans are among the most virtuous. Nine years after she released her last full-length disc "In Us We Trust," Bitch is back with "Bitchcraft" (Kill Rock Stars), an album that draws on all of her strengths with dazzling results.

There are dynamic dance tracks ("Hello Meadow," "You're The Man," "Nothing in my Pockets"), powerful person statements ("Pages," "Another Wound"), as well as provocative social commentary ("Polar Bear," "Hello Meadow").

The common denominator in the brew is Bitch's trademark violin work combined with her political perspective, making this one of the best albums of her long and varied career. Always a lot of fun to interview, Bitch (aka Karen Mould) was kind enough to answer a few questions about the new release.

Gregg Shapiro: I'm bad at math, but according to my calculations, almost ten years have passed between your previous album, "In Us We Trust," and your new album, "Bitchcraft." Is that right?
Bitch: Pretty close! It's nine years.

In a nutshell, what were you doing during that time?
[Laughs] hiding in a log cabin in the woods.

I'm glad you're sharing again. Speaking of sharing, you're known for your long history of collaboration. From the duo Bitch & Animal, when I think you initially crossed many people's radars, to your work with lesbian music legend Ferron, and so many others. All of this is to say that your collaborative spirit continues on "Bitchcraft," on which you co-wrote songs with Faith Soloway (of "Transparent" fame), Melissa York (of The Butchies and Team Dresch), and even Greg Prestopino, who wrote songs recorded by Celine Dion, Bette Midler, and Natalie Cole, among others. What makes someone a good match for you when it comes to collaborating?
I think there's always an inherent trust in each other's process. It has to be somebody that I respect and who I feel respected by. There's a freedom there. There's an ability of play. I'd say play is a huge element for me. It's not like there's pressure: 'Okay, we've got 45 minutes. Let's make a song.'

"Bitchcraft" features a pair of irresistible electro numbers, opener "You're the Man" and "Hello Meadow," which are the kinds of dance tracks that give you something to think about while you're working up a sweat. Can you please say a few words about combining message music with dance beats?
For me, there's something about dance music. Something where there's a beat that unifies us and kind of forces us to move, like you almost can't help it. There's a certain universality to that. As an artist, I've been in the underground for a long time. There's something about adding this kind of universal element I felt like, "Why not?" Why can't I do that, too? Why can't I put what I call my poet talk-ness, my obtuse poetry, and my political poetry into a sonic landscape like that? I think this whole album has been a little bit of experimentation with that.

Would you say that living in that cabin was part of the inspiration for "Hello Meadow"?
Yes! When I left New York, I wrote that song, I believe, right as I was driving to the log cabin; kind of leaving the city and the urban landscape, and suddenly being in this kind of nature's paradise.

What would it mean to you if either or both of these songs became popular with DJs spinning for the tea dance crowd?
I would be thrilled! Absolutely thrilled. I would think of it as one notch toward lesbian visibility. One more notch [laughs].

"Polar Bear" is also a significant statement song, addressing climate change and other issues as it does. Do you think music in 2022 can have the same kind of impact for social change the way that Odetta, Bob Dylan, Joan Baez and others did 60 or so years ago?
Gosh, let's hope so.

Do you see that as the mission of your music, and this record in particular?
Absolutely! I can't help but be political in my work and be part of the times that we're in. To me, it's one of the jobs of an artist.

These days where people have been gathering less physically and it's more digital and we're a little less connected, weirdly, even though we're globally connected. The possibilities of movements feel a little more esoteric. But with what we've seen with the Black Lives Matter movement and a lot of the organizing around climate change, I still think it's possible and necessary that we stay engaged.

You mentioned "Pages" when we first started talking. I think it's one of the most beautiful songs you've recorded, and it also sounds very personal. What can you tell the readers about that song?
I love talking about this one. You know the rapper God-Des? 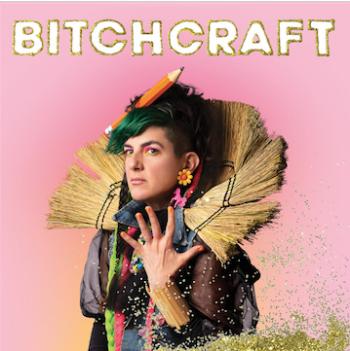 Of (lesbian rap duo) God-Des and She? Of course!
Yes! She was a huge part of this album. And was very much a part of my coven, as I call it, that I relied on to run things by as I was making it. I wrote that chorus years and years ago. She was always saying, "Oh, my gosh, I love that hook so much. But you've got to rewrite the verses."

The verses were very classic Bitch, kind of spoken wordy, a poem that she wasn't quite sure what it was about. She was always trying to push me into putting my craft, if you will, into a pop structure.

We've had such a long friendship. We kind of spar with each other creatively and push and challenge each other. She was always saying, "Of all songs, that song, I really want you to put it into a pop structure."

For this album, I was interested. This was me saying, "Okay, I want to write like that. I want to try that." She really pushed me to rewrite the verses. At the time, I was going through a pretty big breakup in my life, and she gave me a writing assignment. She was like, "Listen! You've got the chorus. Write about your breakup. There's a whole metaphor for writing. So here you are at this chapter. Just write about that and keep it as simple as possible poetry-wise."

It was such a great challenge. I'm so glad I did it. I resisted a little bit. I was like, "Oh, man! Isn't this good enough?" [Laugh] she said, "Just try it." I love a writing assignment! I would send it to her, and she'd say, "Okay, now shave off two bars. We've got too many bars before that." She really pushed me, and pushed me to simplify, too. Every time I listen to it, I think, "I'm so glad that I listened to her!"

Finally, "Shortbus," the 2006 John Cameron Mitchell movie in which you performed, was recently given a 15th anniversary 4K restoration and theatrical re-release. What was the experience of making the movie like for you?
Oh, my gosh! Well, talk about collaboration. Working with John was kind of my first foray into film. Just seeing how many people are involved, between the crew and the costume designers and all of that stuff, I'd never been part of such a big production. That was amazing. Working with John as an artist is pretty incredible. He's a very quiet leader, and very confident in his vision.

Now, years later, seeing it rereleased, it has such a different impact. First of all, seeing the old New York. At least to me the old New York, which, at that time I'm sure for a lot of people felt like, "Well, you didn't know the old New York!" [Laughs] every New Yorker has an ego about it. To be able to be part of this thing that truly was this loving, creative experiment that I think went so well. The finished product is so heart-wrenching, tender, beautiful and meaningful. That was definitely a lifetime highlight. 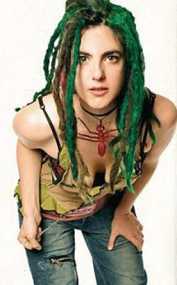