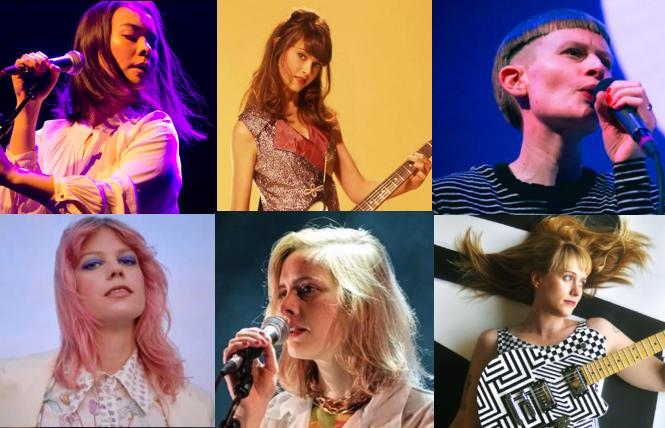 Powerful and talented women, including Oliva Rodrigo, Doja Cat, Lady Gaga, Lizzo and Billie Eilish, have been dominating our playlists as of late. However, they aren't the only ones worthy of your ears and your time.

Along with Sharon Van Etten and Angel Olsen, Mitski has been holding down the hipster fort with releases such as 2016's "Puberty 2" and 2018's "Be The Cowboy." With her new album "Laurel Hell" (Dead Oceans), Mitski sounds like she's hoping for some commercial crossover. While she hasn't gone full-on Adele, "Laurel Hell" is Mitski's most accessible album and features songs, such as "Stay Soft," the '80s-pop-driven "The Only Heartbreaker" and "That's Our Lamp," the clubby "Love Me More," and the '60s retro of "Should've Been Me."

Mitski isn't the only one dipping her pedicured toe in the '60s retro pool. The aptly named technicolor tunes on "In Cinerama" (Omnivore) by April March (aka Elinor Blake) have the ability to make us feel as if we're time traveling in a 21st-century vehicle. Francophile April March has created a soundtrack to the best French new wave movies never made. Album opener "Lift Off" get things off the ground, while levitating numbers "Rolla Rolla," "Stand In the Sun," "Ride or Divide," "Runaway," "Down The Line," and bonus track "Friends Peculiar" keep us afloat.

It's not surprising that Norwegian singer/songwriter Jenny Hval also writes prose in addition to making music. Just read the lyrics to "Year of Love," the opening track of her new album "Classical Objects" (4AD) and you get a sense of Hval's flair for language. Of course, it doesn't hurt that she's also a talented singer and musician. "American Coffee" starts off like that first sip of hot java before becoming a caffeinated dance track. "Year of Sky" is another rhythmic track to keep your body in motion, while the experimental "Jupiter" is out of this world. Closing cut "The Revolution Will Not Be Owned" couldn't be timelier.

If you're planning to dive into Flock of Dimes' "Head of Roses: Phantom Limb," it's recommended to revisit its 2021 predecessor "Head of Roses" (Sub Pop). Flock of Dimes, the solo project of Jenn Wasner (of Wye Oak fame), is alternately beautiful and unsettling, beginning with opening track "2 Heads." "Price of Blue" is alternative blues, while "Two" is lightly funky. Also worth mentioning are the haunting "One More Hour" and "No Question," as well as the subtle twang of "Awake for the Sunrise."

The trademark detached vocals of British/German singer Anika (think Nico in our century) are a good fit for a song such as the spoken/sung "Finger Pies" and "Critical" from her album "Change" (Sacred Bones). The spooky "Critical," about giving her man "the last word" and giving him "what he deserves," sounds like revenge set to music. Potential club banger "Naysayer," the dark wave of "Freedom" and dreamy album closer "Wait For Something" are also worth a listen. Hopefully, Anika won't make us wait another 11 years between releases.

It's been 15 years since Canadian singer/songwriter Basia Bulat released her debut album "Oh My Darling." On her latest, "The Garden" (Secret City), revisits 16 songs culled from her first five albums in "classical string-quartet arrangements" by gay musician Owen Pallett (Final Fantasy) and others, giving listeners a fresh perspective on Bulat's artistry. ?