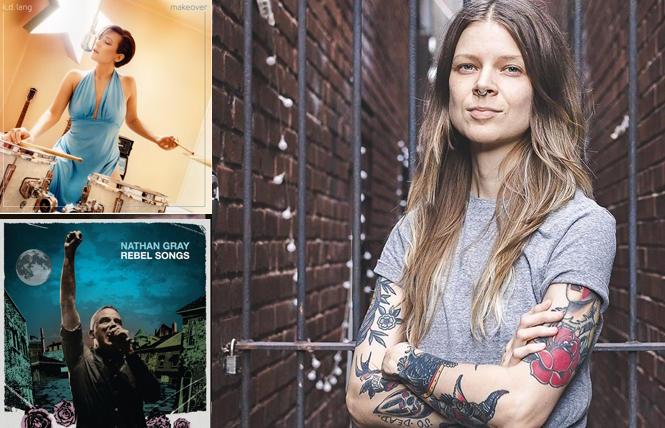 With insane anti-LGBTQ laws popping up all over the land (and the world, for that matter), now's a good time to remind ourselves (and our enemies) about the significant contributions of artists from our community.

Makeover (Nonesuch), the marvelous 14-track k.d. lang remix album, was released in May of 2021, during the peak of the COVID-19 pandemic. Consisting of remixes of eight lang songs (with a few appearing more than once), Makeover could easily have been a hit with the club crowd eager to get moving on the dance floor.

Still, plenty of folks found ways to move at home during the lockdown, and it wouldn't be surprising to learn that Tony Garcia's Movin' Mix of "Just Keep Me Movin'," Greg Penny's St. Tropez Mix of "Miss Chatelaine," Love to Infinity's Radio Mix of "The Consequences of Falling," Junior Vasquez's Main Mix of "If I Were You," and Ananda's Sweet Bird of Summer Extended Mix of "Summerfling," aided in various home workout routines.

Now that things are opening up again, and the weather's warming up, it would be a good time to rediscover this overlooked gem as the soundtrack for your runs, long walks, or bike rides.

Without k.d. lang, who paved the way for LGBTQ country acts with her delightful and unforgettable stage persona beginning in the mid-1980s, queer country artists including Sarah Shook and Adrianne Lenker might never have dared to do what they're doing today. Nightroamer (Abeyance/ Thirty Tigers), the new full-length album by Sarah Shook & the Disarmers, picks up where the alt-country band left off with its 2018 album Years.

The 10 songs are a showcase for Shook's powerful and emotive voice, particularly on the songs "If It's Poison," "Been Loving You Too Long," "Talkin' to Myself," and the title tune. Be sure to check out "I Got This," which reveals a funkier side to Shook and her bandmates.

Adrianne Lenker of Big Thief wrote 19 of the 20 songs on the hipster country-folk band's new double album Dragon New Warm Mountain I Believe in You (4AD); the 20th song she co-wrote with band member Buck Meek.

The otherworldly hoedown twang of "Spud Infinity" features a jaw harp and a fiddle, while album opener "Change" is an example of the moodier side of country.

A number of these songs, including "Red Moon," "Dried Roses," "The Only Place," and the overtly queer "12,000 Lines," wouldn't be out of place on a Melissa Carper or Sad Daddy album. Big Thief also stretches its sound to encompass other styles on songs such as "Time Escaping," "Blurred View," "Little Things," "Flower of Blood," "Wake Me Up to Drive," and "Simulation Swarm."

Joe Troop, the queer leader of the Latin-influenced American band Che Apalache, has returned with his latest solo album Borrowed Time (Free Dirt). An outstanding banjo player, and vocal musical activist if there ever was one, Troop gets things started with "Horizon," declaring "Mother Earth is burning," and issues the climate call to arms "Call your friends and neighbors/What is right is right/Let us not give in to Earth's damnation." Amen, brother!

"Love Along the Way," from which the album gets its title, calls out the leaders in charge of the "mucked up system that don't give a damn." And so it goes, with the justice system taken to task on "The Rise of Dreama Caldwell," and a "mercy is for everyone" plea on "Mercy for Migrants. Troop even takes a moment to celebrate the "greasy pride" of "two-cent queers and pork chop queers," on the wondrous "Purdy Little Rainbows."

Rebel Songs (End Hits) is exactly the right title for the new album by pansexual Nathan Gray (of post-hardcore band BoySetsFire). The dozen tracks are a call to action, to "listen up, raise your fist in the air" (as Gray sings on "Look Alive") by a band featuring trans guitarist Jaelyn Robinson and bi backing vocalist Becky Fontaine. A worthy soundtrack for a long-awaited revolution.