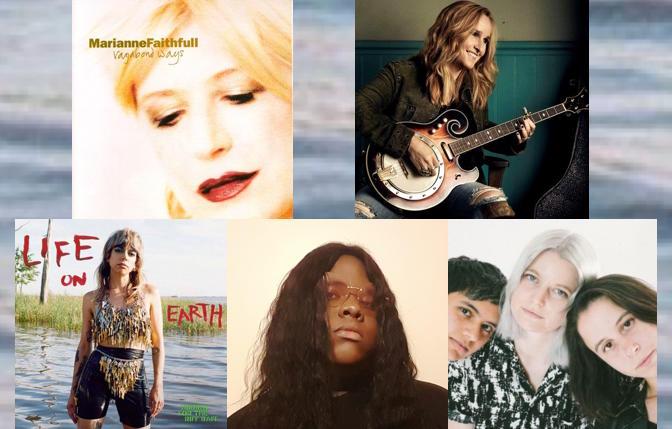 Lesbianism dabbler Marianne Faithfull is the very definition of a survivor. She triumphed over Mick Jagger and drug addiction. She returned from obscurity with the brilliant Broken English comeback album in 1979 and has gone on to record several albums since then.

One of those albums, 1999's Vagabond Ways (BMG) has just been reissued on 180-gram vinyl, marking the recording's debut in the format. The 10 songs, sung in her trademark late-in-life growl, find Faithfull leaving her distinctive mark on songs by Elton John and Bernie Taupin ("For Wanting You"), Pink Floyd's Roger Waters ("Incarceration of a Flower Child," previously unrecorded by the prog-rock legends), and Leonard Cohen ("Tower of Songs"), and Daniel Lanois ("Marathon Kiss," featuring Emmylou Harris on backing vocals), as well as a pair of songs — "File It Under Fun From the Past" and "Wider Shores of Love" — on which Faithfull is reunited with Broken English collaborator Barry Reynolds. It's also worth mentioning that in 2020 Faithfull kicked COVID's ass!

Lesbian rock icon Melissa Etheridge released her eponymous debut album almost 35 years ago. In that time, she went from being a midwestern roots rocker to a full-fledged superstar, as well as an outspoken LGBTQ icon. Sure, it's been a while since she's topped the charts, but that doesn't mean she's been sitting idle.

Her latest release, One Way Out (BMG), is an interesting project in which she reunited with her original band members (the then and now photos are fab!) to record seven songs she composed in the late 1980s/early '90s. Additionally, the album closes with a pair of vintage (2002 is vintage, right?) live recordings.

In many ways, Faithfull and Etheridge paved the way for countless queer artists who came after them. New Orleans-based Bronx native Alynda Segarra aka Hurray for the Riff Raff is one such performer. On Life on Earth (Nonesuch), HFTRR's first LP since 2017's universally acclaimed The Navigator, Segarra has created a "nature punk" narrative over the course of 11 songs.

With its "don't turn your back on the mainland" mantra, the first single "Rhododendron," as well as the irresistible "Pierced Arrows," are message songs you can dance to if so moved. The haunting title cut warns of leaving the planet "beyond repair," and the spoken word anti-I.C.E. statement "Precious Cargo" is every bit as powerful as you might imagine. In a queerly poetic movie, Segarra is joined by acclaimed gay writer Ocean Vuong on "Nightqueen."

Chicago-based trans musician Zvrra calls on techno and house influences for their five-track new EP Array of Light (Whited Sepulchre). The songs, numbered 1-5, share their name with the EP title, but each one offers its own unique electronic experience. The first recalls classic Paradise Garage disco, while there's a dark wave aspect to the second, and the closing track is glittered with glitch.

Q-Music: Bowie and beyond