Q-Music: Bowie and beyond 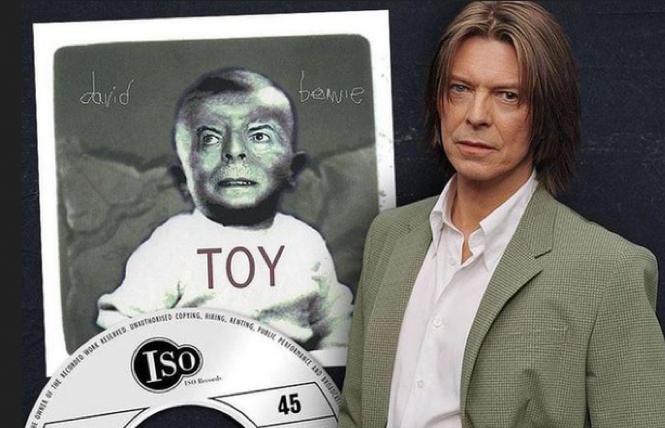 Toy (ISO/Parlophone) is the perfect, playful name for what is labeled as "the new album from David Bowie!" The posthumous three-disc box set (Toy box, get it?), featuring the 12-track album, a disc of "Alternates & Extras," and one titled "Unplugged & Somewhat Slightly Electric," from one of our first openly queer rock stars was actually completed in 2001, but unreleased until now.

Working with some of the musicians from 1999's Hours (including Holly Palmer and Mark Plati), as well as Lisa Germano, Emm Gryner, lesbian bassist Gail Ann Dorsey, and Bowie mainstay Tony Visconti, among others, Bowie re-recorded this album of older songs (dating from 1964-1971), and in addition to the fresh arrangements, the songs are notable for being performed by an older, wiser Bowie.

His lived-in voice adds an intriguing element to the songs, including standouts such as "Conversation Piece," "You've Got a Habit of Leaving," "Shadow Man," "Let Me Sleep Beside You," "Can't Help Thinking About Me," and "Karma Man."

The aforementioned Tony Visconti co-produced and plays on A Night to Remember (Taxi/Gauche) by queer 21st-century glam-rock artist Brion Starr. Whether he's dabbling in minimalist lyrics as on the mesmerizing "21st Century Limited (For Alice)," making a declaration such as "here we are, who we are" on the slinky "Same Flame (Stay With Me)," or giving us something irresistible to dance to on the electronically-propelled "Nocturne," Starr knows how to shine.

DC-based Bryce Bowyn wears his various musical influences, including Erasure and Lady Gaga, on his sheer, embroidered sleeve on his first six-song EP, A Rosy Retrospect (brycebowyn.com). His knack for crafting immediately attention-getting dance music is obvious right from the start with the finger-snapping club cut "Bye Bye." Bowyn continues the trend with stylish "Bleu," and the bumping "Ruthless." He also displays a rocking edge on the strutting "Undress Me" and subtle humor of "Nice Things."

You may recognize gay singer/songwriter Davis Mallory from his 2006-07 stint on MTV's The Real World: Denver. Leaving his conservative Christian southern roots behind, Davis made a lasting impression on viewers due to an on-air confrontation with a fellow cast member. On Little Victory (davismallory.com), Davis' second album, he makes queer dance-pop that is sure to even get the most firmly planted wallflower up and moving. Certainly "Shirtless" deserves to be a tea dance standard.

Last, but far from least, trans musician Lotic has released an album that would no doubt have appealed to David Bowie's experimental side. The nine songs on the fittingly titled Water (Hounds Tooth) by Lotic (aka J'Kerian Morgan) wash over listeners in a series of powerful waves. "Emergency" is as urgent as its name, and "Come Unto Me" is, simply put, soul-stirring. "Always You" borders on terrifying, and the rhythmic conclusion of "Diamond" sparkles like its title.