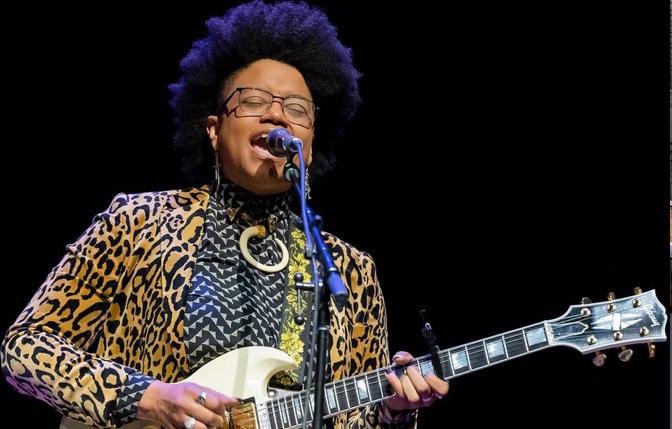 Like fellow out performer Brittany Howard of Alabama Shakes, queer black singer/songwriter Amythyst Kiah was affiliated with a musical group that received Grammy attention — Our Native Daughters (along with Rhiannon Giddens). On her amazing solo debut Wary + Strange (Rounder), Kiah wastes no time in making her personal statement on "Soapbox," and then ups the ante on the fiery "Black Myself." From modern blues stompers "Hangover Blues" and "Fancy Drones (Fracture Me)" to the lush twang of "Firewater" to the experimental folk of "Ballad of Lost" and "Sleeping Queen," Kiah, backed by all-star musicians including Wendy Melvoin, Ethan Gruska, Tony Berg and Amy Ray, to name a few, never disappoints. www.amythystkiah.com

Opening as Born at the Disco (Kiam) does, with a title tune boasting synthesizers and a beat straight out of the Giorgio Moroder or Robyn handbook, you might think that lesbian singer/songwriter Jennifer O'Connor has abandoned her trademark lo-fi style, but you'd be mistaken.

What O'Connor has done is sonically enhance her already notable creative skills with new tools and the results are thrilling, to say the least. If there was any justice, "Born at the Disco" would be a hit single or become popular with club DJs. O'Connor's electronic eclecticism also surfaces on the funky "Your Job Is Gone," which has a musical arrangement that belies the seriousness of the song.

The electronics also surface subtly on the downbeat "Carrying You" and the dark "Pretty Girls" (which is reminiscent of Becca Mancari's "Hunter"). Fans of O'Connor's previous albums will no doubt love "Less and Less," "Lucky Life," "Crimes," and "Tell The Truth." www.jenniferoconnormusic.com

Arriving a few years after Clark's masterwork Big Day in a Small Town, her Your Life Is a Record is another example of the talented singer/songwriter's gift for unforgettable melodies and lyrics that alternately have us laughing and crying out loud. "I'll Be the Sad Song," which falls into the latter category, is the tune from which the album's title is drawn. The following cut, "Long Walk," is the flipside, a smart kiss-off in the country tradition. Clark, who wrote a number of Kacey Musgraves's biggest hits is a star in her own right, and songs including "Love Is A Fire," "Who You Thought I Was," the political "Bigger Boat" (featuring Randy Newman), "Who Broke Whose Heart" and "The Past Is the Past" are proof of that. www.brandyclarkmusic.com

Lilli Lewis, a queer, black, musician and activist with roots in New Orleans, is back with Americana (Red Hot), her third album of "Afro-Americana." Lewis sets the tone with "My American Heart (Prelude)," in which she relates "My American heart is alive with the fire/In the promise of tomorrow." Following that, Lewis sings of the possibility of peace ("Wrecking Ball"), risking everything for survival ("If It Were You"), taking a path of healing ("A Healing Inside"), racism ("Coffee Shop Girl"), and pays homage disability rights activist Judy Heumann, two-spirit people and others in the uplifting "The Great Divide." www.folkrockdiva.com

After almost 25 years and a dozen studio albums, out singer/songwriter Ana Egge deserves to be commended for continuing to surprise and delight her fans as she does on her 12th album Between Us (StorySound). Outstanding and diverse, from brassy and slinky opener "Wait A Minute" and the tricky beat of "The Machine" to the experimental buzz of "You Hurt Me" and the addictive "Be Your Drug," Egge has given us what may be her most commercial record, one that deserves to be heard by a wider audience. /www.anaegge.com

Putting some distance between her Christian music past and her queer identity, Marley Munroe, writing and recording under the moniker Lady Blackbird steps out with Black Acid Soul (BMG/Foundation Music Productions). With her raw honey alto, comparisons to Nina Simone are unavoidable, beginning with opener "Blackbird." But there's much more to Lady Blackbird than that, and soaring numbers including "Beware The Stranger," "Nobody's Sweetheart," "It's Not That Easy," "Lost and Looking," and "Collage" are indicators of a high-flying future. www.ladyblackbird.com

With cover art by her painter girlfriend Jenna Gribbon, Torres (aka Mackenzie Scott) makes her boldest queer statement yet on the blazing Thirstier (Merge). Right from the start, with the shape-shifting "Are You Sleepwalking?", Torres takes us with her on her musical answer-chasing quest. Love throbs throughout, like the synths in "Don't Go Puttin' Wishes in My Head," "Drive Me," "Hug From A Dinosaur," "Constant Tomorrowland," club banger "Kiss The Corners" and the sating title track. www.partisanrecords.com/

Queer non-binary singer/songwriter Rosie Tucker is difficult to pin down on their album Sucker Supreme (Epitaph), and that works in their favor. This can probably be best experienced on the Liz Phair-like lo-fi of "Trim" (containing the lines "Shaving my legs for the first time in ages/I'm smooth as a river stone/Feeling amphibious") which is followed by the alt-pop "For Sale: Ford Pinto," the breathless cover of Jeffrey Lewis' "Arrow" and the brief electro-snippet "Creature of Slime," all of which illustrate Tucker's musical diversity. www.rosietuckermusic.com