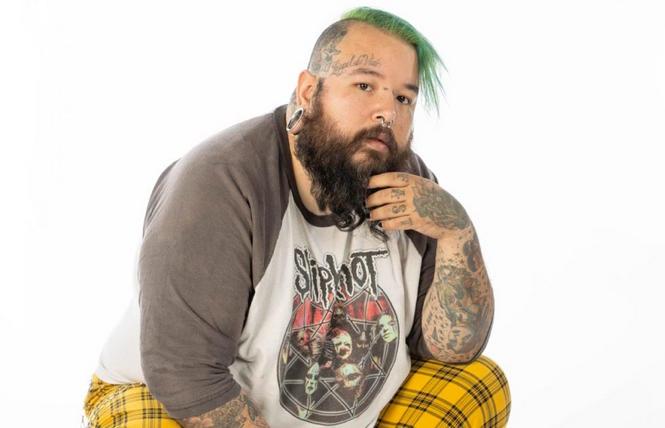 Chris Conde, the Austin-based self-proclaimed "thicc, queer Mexican" rapper has returned with their second full-length album Engulfed in the Marvelous Decay (Fake Four Inc.), available on clear (and queer) vinyl. On this powerful follow-up to 2019's Growing Up Gay, Conde draws on their various influences, something that comes across forcefully on the metal edge of "American Faggot," the emotional rap of "Everyday," the indie rap/pop of "Okinawa," the dancefloor banger "Sun," and the political statement of "Seat at the Table." Chris was kind enough to make time for an interview in early autumn 2021. 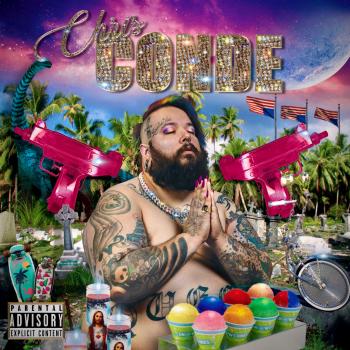 Gregg Shapiro: According the liner notes, your new album Engulfed in the Marvelous Decay, "was originally a post-rock project" by you and your friend Ed (Hirschmungl) that began when you were teenagers in Annapolis, Maryland. How did it morph into a hip-hop creation?
Chris Conde: Before I wrote those liner notes, I sent the record to Ed. He said, "This album is just completely you. All of your influences are in here." He's known me since I was 16, and he said, "All of your metal, your rock, your hip-hop; all of your influences. If somebody knew you like I do, I see everything that you've been influenced by on this album." I guess it's just me starting to experiment with music. Especially really trying to create within those early teen years.

When we were creating that music in Maryland, I remember we came up to the kitchen to have a snack or something at his parents' house, talking about what we can call this project. Not really being serious, but just being kind of dumb, and it just came out of nowhere, "Engulfed in the Marvelous Decay."

Bands like Explosions in the Sky and Fear Before the March of Flames had come out. Sufjan Stevens had all these long song titles. I wanted to do something a little bit extravagant, over the top and tongue in cheek. I always kept that phrasing in my head and in a weird way it made sense for this record.

You're now based in Austin. Are you finding support and camaraderie in both the LGBTQ and hip-hop communities?
Yes. Initially I came up through the punk rock and rock and roll spheres and communities. I didn't play my first rap set until six years ago or maybe a little bit longer. I didn't really go to a whole lot of rap shows. I was really involved in the hardcore and indie communities. That's where a lot of my friends were. They asked me if wanted to do my rap stuff at their show. I said, "Okay."

So, I didn't come up through hip-hop. To answer your question, yes, now I feel very accepted in both communities. I've been surprised about how well the rap community accepts me here in Texas. There are some great people here who love what I do and encouraged it and love that I'm doing it. There was a guy named Bushwick Bill from the Geto Boys. They were originally from Houston but then here in Austin for maybe the last 20 years. I opened up for him during SXSW event and I was rapping about being queer and overcoming internalized homophobia.

At the end of my set, I said, "Thank you for letting me be here, for letting me be who I am. I think it's important that people like me are on these bills like this and I appreciate your support." I handed the mic to Bill who was next, and he was like, "That's what's up. That's what hip hop is." It was cool to get a shout-out from somebody who was as legendary as him. There was some affirmation from an older generation.

From a forebear.
Yes! There've definitely been artists, like San Antonio's Third Root, who understand and see the pedigree of influence I've digested from hip hop, growing up in the 1990s. Listening to Missy Elliott and Busta Rhymes and them being able to see that influence on me. It's nice to know they know where I'm coming from.

Obviously, every artist is trying to do their own thing, but I think it's important, especially with rap, to be able to say, "This definitely comes from these people and these spaces." I do feel very accepted in the rap community, and the LGBTQ community. I think they love that I'm as flagrant as I am [laughs], really in your face.

I'm very unapologetically queer and subversive in that way. I don't care who knows or who doesn't. Part of my art comes from a place of spending so much time trying to not be gay, being so concerned about trying to be straight and fit into some sort of mold that people expect me to be in. My art came from a very spiteful place. It just explodes with an earnest urgency [laughs].

"Mariposa" is a fitting name for the second song on the album, especially in the way it takes flight on the subjects of self-worth and survival. A mariposa also emerges from a cocoon, and the song "Re-emerge" visits those similar themes. Would you agree that there is a through-line connecting the songs?
Yes, with those songs. But, also with the entire album. "Mariposa" is a statement of who I am now. My first record, Growing Up Gay, which came out in 2019, talked about getting to a place of finally being okay. 'Mariposa' says, 'I am here, and I am ready and I'm ready to give back. I'm here to tell you what my journey has been like.' [The song] "Re-emerge" is basically, this is what you do. 'Stretch out your hand towards the ceiling/rearranging holy healing/from way deep in.' Giving people permission to transform themselves.

Do you think that's another way that that sobriety comes through in the work?
Sobriety was the start of me getting to a place of changing. I didn't realize that I even struggled with internal internalized homophobia. I wasn't in a place where I could even see that. When I got sober, I saw how much I was still not okay being queer.

Back in 2014, on day one of my sobriety, I called a friend who is gay and had been sober for a few years. I was like, "I don't know how to live my life anymore." He said, "I'll come pick you up and we can talk." I didn't know who else to reach out to. I knew that he was gay, and he was sober and somehow, he was happy.
I didn't know how you could get all those things together [laughs] and make it work. He picked me up and took me to his apartment. He said, "I'm going to tell you my T, my truth, and then you'll tell me your truth, how you got here, and I'll tell you how I got sober. In the meantime, I'm going to put you in drag."

We shared each other's stories, and he painted my face as a drag queen, and I put a wig on, and something healed in me on that day. It was this powerful moment. I look back at that as when everything pivoted. Something gave me permission to express myself however I wanted, and I could also be sober doing it.

According to the Internet, so-called "cancel culture" came into being in the late 2010s. Would it be fair to say that your song "Cancel Culture Blues" is an attempt to cancel cancel culture, or at least to call it out for what it is?
Yes. I think there are a lot of systems that we've tried to put in place that are not working and that are dangerous for our growth as a community. I think that cancel culture is one of these things that are more harmful than they are good. It's definitely easier to tear down something than it is to build something.

When we exercise cancel culture, we don't allow people any sort of grace, any sort of communication, space for growth or redemption. It's like putting somebody in the middle of a field, picking up stones and stoning them to death. "Cancel Culture Blues" was written to say, 'This isn't working anymore. We need to stop doing this.'

I don't think we shouldn't hold people accountable. If you listen to the rest of my record, I think people would understand where I'm coming from. No one has challenged me on that song, saying that I'm defending abusers because that's not what I think people get from my music.

Policing of people is ironic especially, in this day and age, so it's challenging these systems, and asking "Why are you doing this? I think this is actually for your own ego, I think this is actually about you, and not about moving forward." Because, at the end of the day, as I broke it down in the song, everyone has made mistakes. Not one person has not hurt somebody else, even if it was unintentional. To masquerade that you are the pure-hearted person and judge of everyone is just silly to me.

Album closer "Sun" sounds like an homage to classic drum & bass and break-beat. Is that something you plan to explore more of on future albums?
Possibly. I don't produce a whole lot of music. But "Sun" and "Light Repeating," the intro and outro, I produced myself. Sometimes I struggle with states of mania and panic and depression. I just need to create sounds to help me feel differently in those moments. For the intro, I was feeling very depressed and recorded myself doing those "ahs," and I felt better. The same thing with the outro, "Sun." I was feeling kind of crazy and I started writing these beats and then looping them, and building this whole little world. I felt like they worked.

Yes, they function as brackets for the album. Finally, if you'll indulge me, I don't think an interview with a queer hip-hop artist would be complete without asking their opinion of Lil Nas X. Please say a few words about what you think of him.
I don't listen to a lot of Lil Nas X's music, but I think that what he's doing is amazing. I think that him being able to be in these spaces where he's able to subvert these spaces into queer spaces. What he does is he gets naked and hangs out with a bunch of other people. I think that's super important in the normalizing of queer culture.

At the end of the day, we're all human beings. I think what he's doing is important. Am I impressed by his lyricism and syllabic patterns and cadences? Not particularly. He's not my favorite rapper in the world.