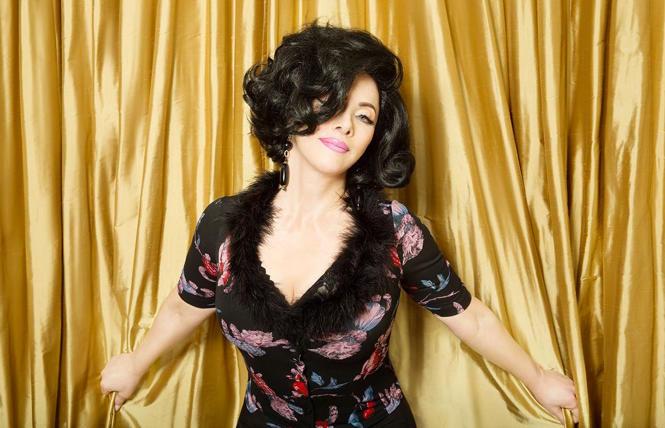 In terms of music and movies, 1982 was an unexpectedly significant year in queer culture. The movies Making Love, Personal Best, and Victor/Victoria were released in theaters. The UK band Culture Club, led by the original gender-bender Boy George, burst onto the scene and topped the charts, even winning a Best New Artist Grammy Award in the process.

That same year, a singer named Josie Cotton released her debut album Convertible Music, containing the campy new wave single "Johnny, Are You Queer?" (written by Bobby and Larson Paine). Depending on where you lived, it was either a hit or just bubbling under.

One thing's for certain, it helped to put Cotton on the radar of a lot of LGBTQ folks, especially those with a good sense of humor. Of course, the fiber of Cotton's talent is greater than that.

Over the course of her career, she released six more albums, had songs featured on movie soundtracks, and founded her own record label. As a record mogul, she's been able to reissue previous albums, including Pussycat Babylon on vinyl, as well as see to the long-awaited CD debut of Convertible Music.

Cotton, who is embarking on an autumn 2021 concert tour, was gracious enough to make time for an interview before hitting the road. She performs on Nov. 13 at The Great Northern in San Francisco.

Gregg Shapiro: Josie, 2022 marks the 40th anniversary of the release of your debut album Convertible Music, which has been re-released in an expanded edition on colored vinyl as well as on CD by Bomp! and your own Kitten Robot Records. Do you have anything special in the works to mark the occasion?
Josie Cotton: I didn't even realize that was the case. [Laughs] I didn't know there was an anniversary coming, so thank you! I don't have plans at this moment, but it sounds like I should start making them right now [laughs].

Did you have gay friends at the time that "Johnny, Are You Queer?" was released and, if so, were you concerned about how they would react to the song?
I grew up with a whole gay parade of friends of my mom's. She was very progressive, at the time, in Dallas, Texas. She had gay weddings in her house. Her best friends were gay. I grew up in a ballet studio [laughs] with a lot of male dancers who swung that way. And my father turned out to be gay. I'm immersed in it.

Do you recall the way your friends and family reacted to the song?
My friends loved it. Everyone in California was pretty elated over the fact that they had a song that they thought of as their own, which was lovely. The only people who were confused and angry [laughs], as they usually are, was the religious right, who were protesting at KROQ where I think "Johnny..." was number two (in airplay popularity). They thought I was a gay man trying to convert people to homosexuality [laughs]. Because I have an odd sense of humor, I would watch some of these crazy shows. They were playing "Johnny, Are You Queer?" at half-speed.

(Televangelists) Jan and Paul Crouch, who had a whole worldwide TV network, said I wasn't real. I remember thinking, "God, I sound just like Brian Wilson," when they played it at half speed. (Sings "Johnny, are you queer, boy" very slowly.) [Laughs] they were crying and screaming on TV. I was thinking, "No, no, we didn't mean that! You're missing the whole idea of this." 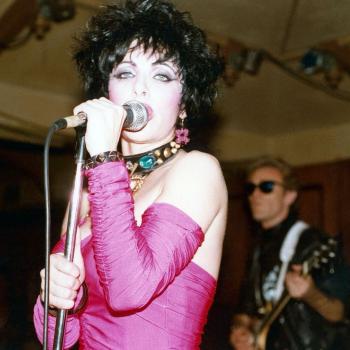 Josie Cotton performs with her band.

It was just strange. As you probably know, there was some reaction on the East Coast that was not as friendly as it was on the West Coast for some reason. It's always been kind of a mystery to me how I was banned in Amsterdam, which I thought was kind of a wonderful moment in my life [laughs]. That's something I can be proud, I suppose, if I choose to be.

A lot of younger friends didn't know there was an issue with that word. They took it in the spirit that it was written, which I think was very innocent. It was more like a phenomenon that was happening.

In the androgynous New Wave days, girls were falling for boys, and you didn't know quite what was going on. Also, I considered it an acting job on my part, because I always had great gaydar [laughs], out of the womb. The girl singing that song was dumb as a bag of rocks [laughs]. It's like, "What? You don't know what's happening?"

That was the funny part of it to me, because she was just so clueless. And it was done so innocently. That was the whole idea of it. I think on the East Coast it had an odd pairing in that, in scheme of things, it was when AIDS was coming to the East Coast. I didn't realize it until much later. I understand why there was a reaction to me, like who am I to come in and ask this question when all this tragedy was going on. I did appreciate that in time, that that was poor timing.

But it was by no means intentional.
No, it wasn't. Someone asked me, "What would it be like if that song was coming out now, and no one ever said that before, or used that word in a way that wasn't derogatory like that song does?" It has no demeaning intent at all. I really think that it couldn't come out today. It had to come out at that moment. It didn't have to be me. At that moment there was an innocence, and (the song provided) a dance-y way to defang a word in this way. (Now) I think people are so politically correct, I don't think that word would fly.

The popularity of the song, and the neglect you received from the major label, ultimately resulted in your being labeled a "one-hit wonder." People tend to have strong feelings about that moniker; either they see it as a badge of honor or a source of shame. Where do you stand?
This is funny to me, because it wasn't a hit. It was banned from the radio [laughs]. I never made money from it. I wonder what they mean by 'hit' in 'one-hit wonder' because I just took a bullet for that song, basically. I also had songs that charted much higher than that, so that's not even accurate.

Another part of it is that it was more like an atom bomb, that song. It actually caused seismic change in an invisible way. It seemed like a joke then. People also said that I sang "joke songs." It was so much more than that. I just feel proud that I was a part of that because I think the right people own that word.

I feel a sense of pride when I hear people so casually use the word. 'I'm a queer artist. I'm a queer singer.' I feel kind of good that that is in the world now and I had some small part in doing that. I've had so many gay men and boys come up to me and say that that was the song that gave them permission to be gay.

We're speaking the day before you are scheduled to perform as part of the Lost '80s Live all-star line-up. What does it mean to you to be part of such an event?
I've done quite a few of these now. I avoided them up until a couple of years ago, because I was doing so many different types and styles of music that I did not want to be associated with the '80s, honestly. I went my own way, and that freed me as an artist, so that was a good thing.

A couple years ago, it came up again and I went, "Okay, I'll do that." Then I kind of fell back in love with the '80s sound [laughs]. I remember it in a different way than now (when) I'm perceiving it as I'm singing it. It became fun again. I was doing these shows and now I'm at the point where I'm like, "Okay, I can't one more time." I think I'm almost at the end of my ability to go back in time because...

...there's so much more to you.
Right! There is so much more, yes. I feel like I'm better at what I do; songwriting, conceptual art. I think of myself as a concept artist, really. Every album has a completely different aesthetic. That's where I feel alive when I'm doing that.

But when I play these shows, and the Greek Theater (in L.A.) is just a grander version of these shows, the people are so ecstatic. I describe it as performing for 10,000 puppies, and I love puppies! They're so happy and they're almost crying because you're connected with their lives.
All their memories are connected with you. So, it's lovely. I'm so flattered and touched by all of that.

But when I'm on stage, I don't feel like I'm fulfilled as an artist when I'm just doing '80s songs from so long ago. I don't think that's the whole of me is what I'm saying.

Convertible Music was originally released on vinyl, and some of your more recent recordings, including 2007's Invasion of the B-Girls, 2010's Pussycat Babylon and 2019's Everything Is Oh Yeah have also been given the vinyl treatment. What do you think about the vinyl resurgence among music lovers?
I think it's fantastic because the people who are into vinyl really are collectors. They're in love with the sound of vinyl and having the artwork; something that they can hold in their hand it's a kind of a very visceral experience when you can read all the lyrics. I think that's a whole part of the experience of music. Kids, especially, love the vinyl. I didn't realize that CDs are back, too! A lot of people couldn't get my material on Elektra because they never put it out on CD, for some reason. But I don't know quite where they're getting their CD players, because it's been eliminated from the earthly planet.

The 2021 vinyl reissue of Pussycat Babylon comes at a time when electro-pop continues to be a popular musical genre. The club-oriented song "All I Can See Is the Face of Bruce Lee," in particular, sounds like the kind of track that would be a hit with the gay crowd at Tea Dance.

For the song "See the New Hong Kong," there were quite a few dance remixes of that in Europe. This album was a limited release (on CD) 10 years ago. That kind of did a number over in Europe. Then Tiësto did a remix of "If A Lie Was Love." It's fantastic! We're doing a 12-inch single with "Calling All Girls" and the B-side is "Stop Iggy Pop."

Have you ever encountered a drag queen performing any of your songs in her act?
Yes! "Hi, I Like You" was a huge drag queen song in Los Angeles, I discovered. I love that because there's a lot of references to trans and pink cotton candy and hookers. A crazy song about the dark side of love and liking people, but really being a multiple personality [laughs]. The end you don't want to come to in a relationship. They got the humor of it and I was so thrilled. I told my co-producer and he was so ecstatic to hear that because that means you've done something great at that point.