Out at Outside Lands 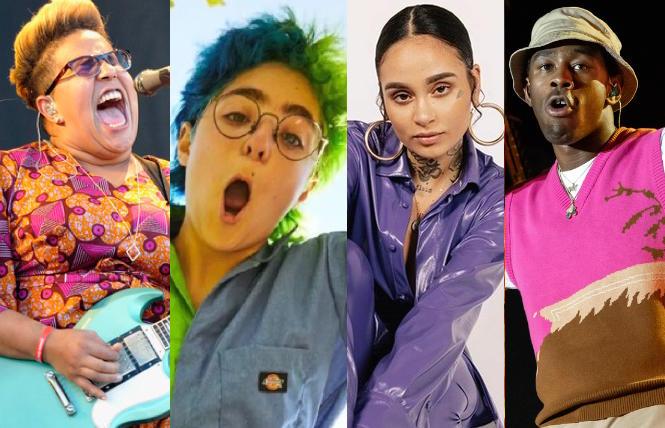 Outside Lands is back. And it's outer than ever.

Of the 100-plus acts playing this weekend's festival in Golden Gate Park October 29-31, more than ten percent can boast of queer bonafides. And that's not counting any of the featured names in the dance music tents, and staunch ally Lizzo.

Given that a 2021 nationwide Gallup poll finds that just 5.6% of the U.S. population identifies as LGBT, that's a remarkable number. It attests not only to the huge creative contribution of queers to contemporary music, but to the growing emboldenment of artists to openly acknowledge non-heterosexuality without fear of collateral career damage.

Although the music fest is sold out, here's just a partial home playlist of this year's queer Outside Lands highlights across a full gamut of musical genres, from R&B to rock to electronica.

070 Shake (Friday, 2:10 pm)
"I really don't describe myself as gay or anything. I just like girls," says the Gen Z Dominican-American electro-pop singer/producer born Danielle Balbuena, whose moody, booming guest vocals enlivened Kanye West's Ye and take the forefront in her own singles including the sweeping "Guilty Conscience," memorably remixed by this year's closing night headliner Tame Impala.

Remi Wolf (Friday, 2:40pm)
The bi Palo Alto-born pastiche master just received a major New York Times profile this past week, which described her kaleidoscopic compositions as "hypercolored explosions." With an oversized personality and grand scale charisma, she's among this year's likely breakout acts: a Cyndi Lauper for a new century and the act my 23-year-old niece is most excited about.

Moses Sumney (Friday, 4pm)
Big Mo, who prefers to avoid labels, is the act that I'm most excited about. While born in SoCal, Sumney spent much of his childhood in his parents' native Ghana, and his singular genre-defying 2020 double-album Grae lushly blends soul, jazz and contemporary classical elements in a way that blurs cultural and sonic borders. He is profoundly cool.

Khruangbin (Friday, 5:10pm)
Global Mélange Rock is a good tag for the psychedelic swirl of this Texas trio, featuring queer bassist Laura Lee, draws on their own cultural backgrounds and a penchant for world music in whipping up instrumental jams that draw on Afghan, Thai and Persian traditions as well as good old American garage band sounds.

Kaytranada (Friday, 8pm) Winner of the best dance/electronic album Grammy for his 2019 release, Bubba, the gay Haitian-Canadian DJ and producer has an encyclopedic mastery of late 20th-century R&B and disco which infuses his sprawling mixes with a cheerful old-school groove. A fine choice for easing into your evening sets.

Tyler the Creator (Friday, 8:25pm) The former Odd Future frontman is among hip-hop's canniest provocateurs. Once castigated in the music press for anti-gay lyrics, he has since publicly wrestled with his own identity in lines like "How can I be homophobic when my boyfriend's a fag?" He's an absurdist gadfly who relishes the confusion he sows.

Melanie Martinez (Saturday, 3:40pm) Baby-voiced, potty-mouthed Martinez first came into public consciousness back in 2012 as a contestant on The Voice. Since then, the singer with a penchant for Sia-meets-Cruella hairstyles has weathered sexual assault accusations from a former girlfriend while releasing albums with the pointedly immature titles Crybaby, K-12, and Afterschool. Her icky Lolita schtick feels like a time capsule worthy of burial.

Angel Olsen (Saturday, 5:50pm) Based in Asheville, North Carolina, Olsen specializes in booming atmospheric tunes which unfurl at a dreamy snail's pace. Her latest EP Aisles is a terrific gateway to fandom, braiding her unique sonic approach to a set of classic 80s covers, including Laura Branigan's "Gloria" and Billy Idol's "Eyes Without A Face."

Claud (Sunday, 12:40pm) The non-binary 22-year-old became the first act signed to Phoebe Bridgers' Dead Oceans label after first capturing public attention with self-released bedroom pop songs including the wistful reputation-making "I Wish You Were Gay." It will be interesting to see how their intimate, melancholy sound translates to a big open-air setting.

mxmtoon (Sunday, 4:25pm)
Oakland's own bi 21-year-old ukulele-strumming Youtube star (also known as Maia) is a prime example of grassroots success, generating millions of online streams for songs that document, among other subjects, her close but challenging relationship with her Chinese grandmother.

Brittany Howard (Sunday, 4:30pm) In both solo shows and gigs as the front woman of Alabama Shakes, Howard, a proud lesbian with blue collar roots, is one of the most compelling singers and guitar players touring today. Bluesy, blustery and utterly in control, she's one of this year's few can't-miss acts.

Kehlani (Sunday, 8:20pm) The Oakland homegirl who was once involved with NBA star Kyrie Irving has since come out as a polyamorous lesbian. Her featured vocals have elevated Eminem's "Nowhere Fast" and Gen Z queer icon Haley Kiyoko's "What I Need" and in her solo hit, "Honey," she notably sang "I like my girls just like I like my honey, sweet a little selfish/ I like my women like I like my money, green, a little jealous."

Also appearing on Sunday at 3:10pm is Nelly, who is not.
www.sfoutsidelands.com 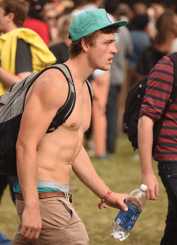