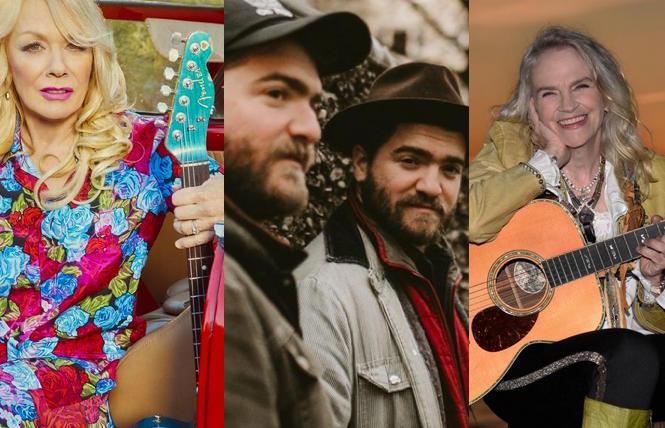 Kate Taylor, kid sister of James Taylor, released her debut album Sister Kate 50 (!) years ago. The record was a marvelous introduction to a talented performer whose career was overshadowed by her older brother. One of the things that made Sister Kate so wonderful was the production by legendary producer Peter Asher.

Fortunately for us, Taylor and Asher have reunited for Why Wait! (Compass), Taylor's colorful new album. Featuring a stellar line-up of guest musicians (and familiar names) including Danny Kortchmar, Russ Kunkel, Leland Sklar, Waddy Wachtel, Scarlet Rivera, Amy Irving and Judy Belushi (yes, that Amy Irving and that Judy Belushi!), Taylor not only recorded a pair of originals ("I Got A Message" and the title cut), but also added her distinctive touch to classics such as "Crystal Blue Persuasion," "Tell Him," "The Glory of Love," "Good Day Sunshine" (with her editorial comments about "making vitamin D" and shrooms), "(You Don't Know) How Glad I Am" and "Long Distance Love."

Nancy Wilson, kid sister and Heart bandmate of Ann Wilson, has released her first solo album You and Me (Carry On Music). Ann may have beaten Nancy to the punch by more than a dozen years, but You and Me is, for the most part, worth the wait.

While the sisters were co-writers on the band's biggest and earliest hits, it was Ann who took the lead vocals and Nancy established herself as one of rock's great guitarists. For You and Me, Wilson chose some excellent cover material and performs solid renditions of Bruce Springsteen's "The Rising," Pearl Jam's "Daughter," and Simon & Garfunkel's "The Boxer." Of the original co-written numbers, standouts include "I'll Find You," "Party at the Angel Ballroom," and "The Inbetween."

Led by Jakob Dylan (son of Bob, of course), The Wallflowers quietly appeared on the music scene in 1992 with a less than impressive debut album. But by 1996, the band's fortunes changed dramatically with its second album, the quadruple platinum T-Bone Burnett-produced Bringing Down the Horse, containing numerous hit singles including "One Headlight."

The band never again matched that level of commercial success, and have now returned with a seventh studio album Exit Wounds (New West), their first in nine years. Right from the start, Exit Wounds benefits from the presence of queer singer/songwriter Shelby Lynne who can be heard on opener "Maybe Your Heart's Not In It No More," as well as "Move The River," "I'll Let You Down (But Will Not Give You Up)," and the duet "Darlin' Hold On."

Jackie McLean, estranged daughter of Don McLean, is one half of the pop duo Roan Yellowthorn along with Shawn Strack. How estranged, you ask? Calling her musical act Roan Yellowthorn is one way for McLean, who writes and sings all of the songs, to put distance between herself and her dad.

Another Life (Blue Élan), is Roan Yellowthorn's second album, arriving three years after its 2018 debut Indigo. McLean has a pleasing vocal style and her songwriting skills shine through on songs such as "Vikodin," "Acid Trip," "Stranger," "Vampire," "Neon Sign" and album closer "Mother."

In addition to the breathtaking old world (read klezmer-influenced) instrumental "A Poquito Doina," The Brother Brothers have created a subtle, but memorable album, via songs such as "Waiting For A Star To Fall," "Circles," "My Holy Way," and "The Calla Lily Song."

This column is bracketed by the elders in this musical family portrait. John Hiatt, father of singer/songwriter Lilly Hiatt, released his first album a few years after the previously mentioned Kate Taylor. But his first hit song, "Sure As I'm Sittin' Here," was recorded by someone else, namely Three Dog Night.

Before his eventual mid-1980s commercial breakthrough, major-label suits at MCA tried marketing him as an American Elvis Costello with disastrous results. Wisely, the folks at A&M recognized his true /singer/songwriter gifts, releasing the brilliant Bring The Family, and the rest is history. For his 24th (!) album, Leftover Feelings (New West), Hiatt teamed up with The Jerry Douglas Band for a genuinely bluegrass experience.