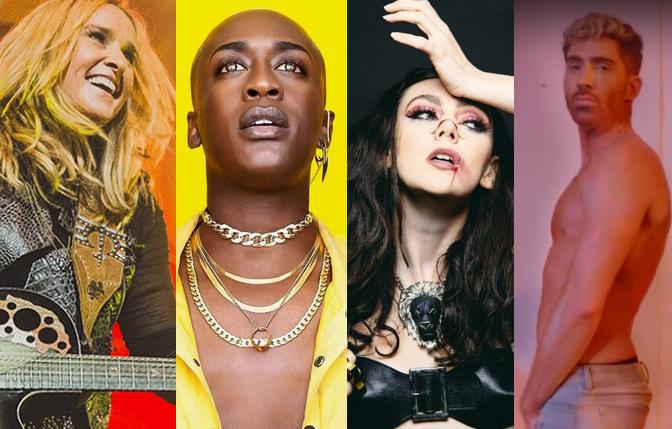 June has come and gone, but grooves from artists all over the rainbow continue to share queer tunes in a variety of genres.

Let's start with a longtime favorite, Melissa Etheridge who originally recorded "For the Last Time" so long ago, she wasn't yet out as a lesbian. While going over unreleased songs for her online show, she discovered the tune, rerecorded it with her band, giving the song a hard rock-blues edge. Etheridge's new album, One Way Out, will be released September 17.
www.melissaetheridge.com

Ethereal, whispered over echoing beats, G. Brenner's "Dee Dee" brings forth a late-night dance song dedicated to a lost mentor. "You were a dancer/ Never settled into /One form," Brenner sings of a gender-fluid performer in an expression of queer kinship. L.A.-based Brenner's second album, Brushfire, will release August 20 on Very Jazzed.
g-brenner.com

Speaking of women on a getaway drive, while Oompa's "Go" features herself and a gal pal in a stylish convertible getaway, the song itself, with a pop-in by Dan DeCristofaro, maintains a more relaxed R&B vibe, despite the implication of alleged crimes. The Boston poet, rapper and educator focuses on queer Black stories and sounds.
www.instagram.com/oompoutloud

Bobby Newberry's "Ride," while glossily L.A. in style, maintains a tongue-in-chic focus. Known for choreographing music videos for Eminem, Nicki Minaj and Missy Elliot, Newberry's stepped out on his own in a deliciously gay music video that includes a feast of young hunks dancing, plus a romantic interlude lit in cotton candy pink. Tres gay, Oh, yay.
www.bobbynewberry.com

You'd be surprised how many out LGBTQ musicians' publicists hide the identity/gender expression of their clients. While we don't know whom she dates (her PR states her ally-ship to all sexualities), we don't care, as L'FREAQ (Lea Cappelli) makes our list for sheer glam and hearty vocals with a dark pop edge. Her song "Gimmick" takes on the falsehoods of beauty expectations while being utterly glam. She's queer enough for us. We're not sure why L'FREAQ isn't yet super-famous, because she deserves it. Her second EP, Showgirl, is out August 27. Oh, and warning: her cover of Britney's "Toxic" will give you chills.
www.lfreaq.com

There's no question that Tom Goss is proudly gay, and on another music roll, with one of his new tunes, "Undercover Summer," grabbing the season by the beach balls. The bear-centric pool party's visualized in the colorful music video, performed with Deven Green & Ned Douglas.
www.tomgossmusic.com

Lil Naz X certainly doesn't need our help in spreading the word about queer music, but Brooklyn's R&B musician SaintAhmad could use a boost. With a clearly male-male sexy video, the song "Clouds" nevertheless expands beyond specifics into a warm smooth sound. Visit his YouTube channel for other songs, like "It's Just Me," with Aidan Paul, some upscale fashion and poolside frolics.

Onsen goes deep into a specific theme: violence against queer people. The driving song "Momma Said" will be included in his new album Keeper, out later this summer. Said Onsen of the inspiration, which in part was stirred by the Pulse nightclub shooting. "Over time, these stories along with those of people I know crystallized into a narrative that feels almost like a Greek tragedy. I imagine a gay kid being kicked out of his home and running away to the city."
Onsen music

Yes, he's got plenty of dance songs and highly produced music tracks, but let me share "Remember Me," a simple acoustic song with guitar accompaniment by Vincint. The delicacy of vocals, his trilling intimate takes from falsetto to bass; what a range! Enjoy more on Vincint's YouTube channel, including songs from his new album, There Will Be Tears.
YouTube channel
www.instagram.com/vincint

If I were to fall in love with a voice, Kat Cunning's would be up on my top ten list. Her video for "Boys" features a group of trans and nonbinary people, and the song drives forward, anthem-ish without being preachy.
www.katcunning.com

Let's close out this playlist on an upbeat note. Referencing classic R&B-pop from days of yore, Michaela Jaé has "Something To Say." The star of Pose (billed as MJ Rodriguez) and her new song offer uplifting singing and a peppy bass groove.

Wait; for an encore, how could we forget Todrick Hall's "Rainin' Fellas?" In a witty nod to the Weather Girls' classic "It's Raining Men," Hall takes it much further with skirts, heels, superhero drag, nude male chorus lines, "Toms, Dicks and Harrys, bears, jocks and faeries." Catch his new album Femunline and his upcoming 2022 tour information, at www.todrickhall.com