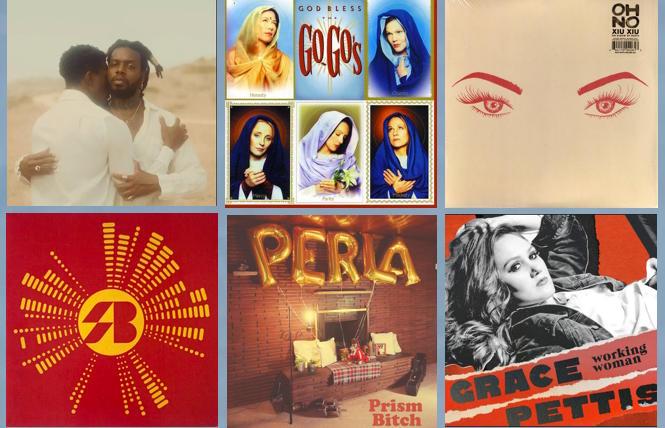 Happy Pride Month, y'all! Even without parades and festivals, there are still plenty of opportunities for us to show and share our pride this season. Supporting LGBTQ+ musicians should be close to the top of the list.

In the 2010s, Frank Ocean paved the way for queer black male musicians. In the 2020s, Lil Nas X took the initiative and ran with it. In between the two, you will find the brilliant serpentwithfeet (aka Josiah Wise). Deacon (Secretly Canadian), the second full-length serpentwithfeet album, is sexy, sly, seductive and spiritual, often in the same song. "Malik" and "Same Size Shoe" are ideal illustrations of this.

"Amir" effortlessly captures the blush and heat of new attraction. Hip-shaker "Sailors' Superstition" makes the most of its subtle beat, while the rhythm of "Wood Boy" is a hot grind. "Derrick's Beard" says more in just over a minute and a half than most songs twice as long, and "Fellowship" brings everything to a close in most celebratory way.

Queer musician Xiu Xiu (aka Jamie Stewart) has a career-long history of making some of the most compelling yet difficult pop music. Just as he lures in the listener, he abruptly shoves them away. This tendency has increased over the years with each subsequent album.

All that changes with Oh No (Polyvinyl), subtitled An Album of Duets. Still employing his fluttery vocal style, Xiu Xiu not only sounds like he's happy to be collaborating with indie rock goddess Sharon Van Etten ("Sad Mezcalita"), gay singer/songwriter Owen Pallett ("I Dream of Someone Else Entirely"), punk feminist legend Alice Bag ("Knock Out"), Shearwater frontperson Jonathan Meiburg ("It Bothers Me All The Time"), and alternative electronic musician Twin Shadow ("Saint Dymphna"), among others, but also with anyone taking the time to listen.

There's more to Prism Bitch, and its debut fell-length album Perla than just its wicked inventive band name. There's lesbian drummer Teresa Cruces, solidly keeping the beat over the course of 11 rocking numbers. Also impressive is the way that Prism easily shifts from power pop ("In N Out") to grunge ("Too High") to riot grrl ("Top of My Game") to retro rock ("Lonely Nights") and that's just the first four songs! "Heathers," "Around" and "Wasting Time," are also notable examples of Prism Bitch's music versatility. www.prismbitch.com

Speaking of queer drummers, Gina Schock of The Go-Go's certainly had a way with the skins. This was made abundantly clear on some of the band's biggest hits, including, aptly enough, "We Got The Beat," as well as "Our Lips Are Sealed," "Vacation" and "Head Over Heels."

After the all-female quintet's 1984 Talk Show album, they parted ways resulting in new projects. Belinda Carlisle (supportive mother of gay son James Duke Mason) hit it biggest as a solo act, while Jane Wiedlin had moderate success. Schock teamed up with Vance DeGeneres (Ellen's brother!) as House of Schock. The Go-Go's regrouped and released God Bless The Go-Go's (Eagle) in 2001, newly reissued in a 20th-anniversary edition (including a vinyl debut), as well as expanded CD and digital versions (with new cover art).

On the whole, God Bless The Go-Go's is a harder-rocking effort than its forebears, beginning with "La La Land," and continuing through "Stuck In My Car" and "Kissing Asphalt." Bonus tracks "I Think I Need Sleep" and "King of Confusion" fit in well with the rest of the songs.

Northampton-based, queer and gender-nonconforming musician Carrie Ferguson invites listeners from all walks of life to join The Grumpytime Club. The eleven songs boast "welcoming and inclusive messages" dealing with "accepting feelings and celebrating differences," while encouraging everyone to love themselves precisely as they are. In addition to singing, Ferguson plays melodica, piano, accordion, and ukulele. Most listeners will find it hard to be grumpy for long after hearing the title cut, "Do It Again," "Mishy Mashy Mushy Mooshy Moo," "The Best Way to Be," and "Up and Down." www.carriefergusonmusic.com

San Francisco-based singer/songwriter Andrew Bundy describes his eight-cut (five songs + three alternate versions) debut EP Good As I Came as a "personal collection of original songs recounting my journey of self-discovery and self-acceptance as a gay man and artist."

While that sounds like a mouthful, Bundy delivers on that promise. Opener "Shame," from which the EP draws its name, contains the meaningful lines, "I am who I am/Not ashamed to be/ The man I've buried deep inside/You can tease me, you can leave me/I just want the world to see me/So the younger boys won't ever have to hide." The songs "Day I Learned to Cry" and "Perfect Life" are equally impactful. Despite its serious subject matter, "Day I Learned To Cry" works well as a dance track via the Wayne G & Andy Adler remix. www.andrewbundy.com

As all LGBTQ+ folks know, we need our allies. That's where singer/songwriter Grace Pettis comes in with her album Working Woman (MPress). The daughter of folk musician Pierce Pettis, Grace has music in her blood. Like Patty Griffin's song "Tony" before it, Pettis' "Landon" does an amazing job of providing a personal viewpoint on what it was like to see a gay childhood friend suffer and to offer what amounts to a heartfelt apology. Indigo Girls join Pettis on the song, giving it even more depth. Ruthie Foster, another out singer/songwriter, joins Pettis on the uplifting "Pick Me Up," while longtime ally Dar Williams can be heard alongside Pettis on "Any Kind of Girl."