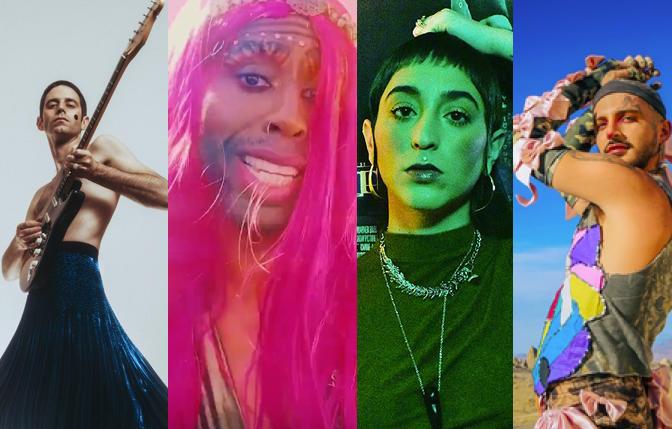 It's not yet June, but multiple musicians have shared new songs with an audible rainbow of sounds and styles to add to your late spring pre-Pride month playlist. So get gaily groovin'.

We've been a fan of David Hernandez since his American Idol days, and even more so after he came out. He's shared his talents at countless Help Is On the Way benefits, including the super-sexy San Francisco editions of Broadway Bares. His new song, "Ily," set in an anxiety-filled dance music video, explores the struggle of maintaining a relationship. "I don't wanna wait before it's too late," he sings to his love interest. We can all relate. Benji Schwimmer (So You Think You Can Dance) and and trans actress Alexa Abraxas costar in the video. twitter.com/DHernandezMusic

Nonbinary folks are not a mere trend, and Plexxaglass' music, including their recent collaboration with Linkin Park's Mike Shinoda for the song "Lilith," described as a reclaiming of bodily autonomy for all humans with or without reproductive organs. It's a rallying of folks within the entire sexuality and gender spectrum to denounce those who try to keep us from thriving." While we await full release of that song, take in the spooky-goth Cubicle Hell in "Dead-Eyed Monsters."
twitter.com/plexxaglass

Not just love and affection, but out gay singers can even contemplate romantic hesitation, as in Matt Palmer's whimsical "I Don't Want It," in which he self-analyzes his doubts about love with bubbly R&B clarity, er, indecision. His new EP, The Good Parts, releases May 28 www.mattpalmermusic.com

On to rock. Bob Mould announced his fall tour —yes, live, in actual music venues! His "Distortion and Blue Hearts" tour starts September 16, 2021 in Boston, with a San Francisco show Oct. 1 at August Hall. The concerts will offer an expansive array of songs from his 24-CD Distortion box set. Here's a taste, "Something I Learned Today." https://bobmould.com/

For some dreamy atmospheric 80s-synth-inspired pop, 21-year-old Juno Uno is off to an impressive start with "Sides," released by the women-owned Red Zeppelin Records. "The song is about a shift in perspective," says Juno Uno. "It is about how the world is changing, and it is up to each individual to interpret what that change means." https://www.instagram.com/juno__uno_/

Speaking of "Change," Manchester, England-based Pale Waves' song alternates driven rock chords with lyrics about the frustration of those who don't, change, that is. Heather Baron-Gracie, lead singer and songwriter for the band, has been dubbed "Music's Reigning Queer Emo Queen." See the band endure a rain-driven setting in the colorful video. Nylon aptly called their sound "high-fidelity pop exuberance with obsidian gothic aesthetics." www.palewaves.co.uk

Blew Velvet, a queer musical producer, composer, and performance artist based in New York City, has a new four-track EP out, including the eponymous song "Touch Me." In the music video, Velvet dances and rides a bike in a desert while dressed in glam ribboned couture and thick boots, a sort of Burning Man vibe, with a theme of distance and longing. www.blewvel.vet

Australian Ryan Downey's got A Ton of Colours to share with us. His song, "Heart Is An Onion" and the accompanying video touch on a bit of whimsy (Lobster arms? Blue head on a platter?), but the sound is seriously rocking with his deep baritone voice recalling earlier folk and rock singers like Nick Cave. www.ryandowney.net

Queer country pop? Okay! Allison Ponthier — The music video for her song "Cowboy" delves into lush scifi-alien visuals while the song remains true to clean simple lyrics and light vocals, as in her newer tune, "Harshest Critic" a self-check on her process of enduring music industry speculation. allisonponthier.com

"No Shade," (https://youtu.be/OAoJWJPTsVg) but Brooke Eden's pure Country chorus gave me chills on the first listen. Yes, banjo-inclusive tradition gets a pop infusion as she struts through the accompanying music video (set in a Tiki bar, no less). By the song's end (spoiler alert) the gorgeous singer-songwriter meets up with her equally glam gal pal. Yes, Ma'am, Country music continues to get a little bit more queer with Eden's outstanding music. Her new song "Got No Choice" directly addresses her female romantic affection on a lake-docked boat. https://www.brookeeden.com/

Angry, dark and quite serious, Aja (RuPaul's Drag Race, season 9) brings hip hop's harrowing angst to music in songs like "Body Count," from the album Nail in the Coffin. Their new album, Crown, was released May 21. If you want to take the dark road while addressing fame, race, class, gender, and sexuality, here's a nonbinary artist to add to your playlist. If you want the visual glam Aja's also known for, join their 866,000+ followers at www.instagram.com/ajathekween

Let's pop over to Denmark for Asbjørn's touching tune written from the perspective of an ex-boyfriend. Oh, broken hearts do have a way of inspiring art. His third album, Boyology, includes the song "Young Dumb Crazy" a reflective pop ballad (a titch too autotuned, and self-described as "synthetically processed emotion," so whatevz). "As I wrote the song, I realized the double-perspective, the irony and my own hypocrisy," he says. Been there, sang that! https://www.asbjornmusic.com/

Pop, desire, beat, vocals; something about the clarity of Sylas Dean's songs balances anthemy romance and head-nodding beats. Then his surprisingly masculine chorus vocals cut through the instrumentals and wait —an honest peal of a high note— countered by a low whispered growl, becomes the icing on what would have otherwise been a too-sweet pop sound. Listen to Dean "Shine." It's only one treat from his debut EP American Dreeming (not a typo). solo.to/sylasdean

Enjoy glam drag on roller skates, purple skies and a bit of "Paradise" with the bouncy fun song aimed specifically at post-pandemic attitude. "This couch is a one-way ticket," sings 'queer space pop artist' Sean The Star Emperor, who "destroys heteronormativity" with a mere wig toss, so get outside and kick it. www.instagram.com/seanstaremperor

With electric guitar riffs, uplifting synths and infectious melodies, "Ooh La La" brings on the summer Pride groove early, as bisexual alt pop artist and advocate Lucy & La Mer shares her uplifting music (with more than 3 million streams so far!). "Be yourself and who are." And so we shall. www.listentolucy.com

Finally, we offer an "Elixir" to the year-plus of pandemic panic and procrastination in Aiden James' new dance groove. As he says in a press statement, James wondered, "As an artist, how do I write an antidote for a sea of hurting people? Something to help cope. We desire to help those whom we love that are struggling. Be it sickness, sorrow, you want to be their cure, the elixir."" With hearty vocals and a determined beat, the accomplished gay singer-songwriter offers a light after the darkness. Get up and dance off the post-COVID cramps. www.aidenjamesmusic.com