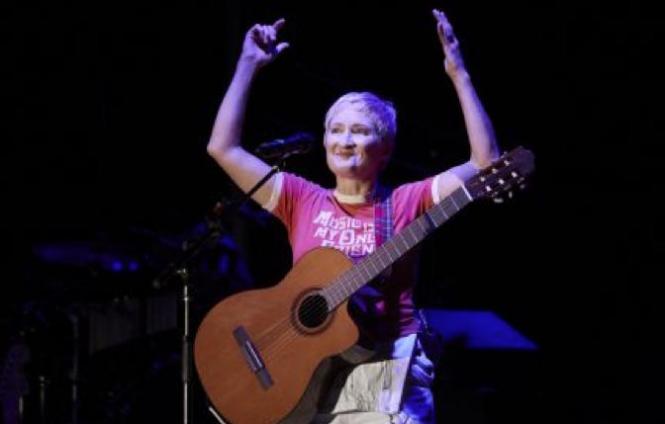 Borrowing a page from John Cameron Mitchell and Stephen Trask's Hedwig and the Angry Inch handbook, Jill Sobule's fabulous and fierce F*ck7thGrade (City Theatre Company), is a musical presented as a rock concert. The show, with a book by Liza Birkenmeier, shares a tuneful quilt constructed of songs from eight of Sobule's studio albums, from her 1990 major label debut Things Here Are Different through 2019's independently released Nostalgia Kills.

During the fall of 2020, due to the inability to produce indoor performances during the pandemic, Pittsburgh's City Theatre constructed a drive-in stage at Hazelwood Green. It was there that F*ck7thGrade was filmed before a live audience, safely socially distanced and seated in their cars.

After making her entrance on a vintage bicycle, Sobule, in unfastened white overalls and a "Music Is My Only Friend" t-shirt, takes the stage and tears into a song about wanting and getting a blue Raleigh Chopper bike when she was in 6th grade in the early 1970s. She also wanted to be a spy and a rock star at that age, and everything seemed to be working out for her. She embraced being a "weirdo."

But everything changed when she entered seventh grade. At that time, it wasn't cool to be a girl guitar player who could shred better than the boys. She was obsessed with watching the Watergate trial, while her mother was having an affair "with the guy who sold us our station wagon." Unlike her female classmates, Jill showed little interest in gossiping about boys or wearing makeup. Additionally, she was pigeon-toed and had to wear "so not good looking" corrective shoes. 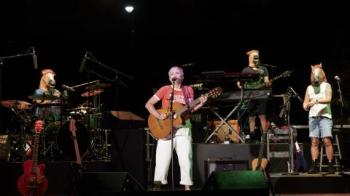 Jill Sobule and her band in 'F*ck7thGrade'

Fortunately, Mary, a cool new girl arrived halfway through the school year. Jill started hanging out with her and her freak friends. They got high. Then Jill found herself attracted to Mary and, if it wasn't for a puke incident, might have had her first same-gender sexual experience. She switched schools, which didn't help. She sought refuge in music, which became her "savior.

As with many queer people, life got better for Jill in college, which included a life-changing year abroad in Spain. It was there that she had her first walk of shame following a night with a woman. Back in the States, she "dropped out of school so I'd have time for waitressing, finding open mics, and figuring out where the lesbians hung out."

Just as she was preparing to leave Denver and move to New York with a girlfriend, she met a record label guy who invited her to Nashville which led to her first record deal.

Shortly thereafter, Sobule had her big breakthrough moment with her 1995 hit single "I Kissed A Girl" (not the inferior Katy Perry rip-off). The rest, as they say, is pop music history, which Sobule reveals in humorous and heartbreaking detail.

On almost all of her albums, Sobule has included at least one song about the horrors of junior high school and adolescence. What makes F*ck7thGrade more than a jukebox musical is the feeling one gets that she's been writing towards something like this all along. She's a natural-born storyteller in song and in speaking, and hers is a story, a cautionary tale of survival, that needs to be told.

Streaming now through June 30, 2021 at citytheatrecompany.org