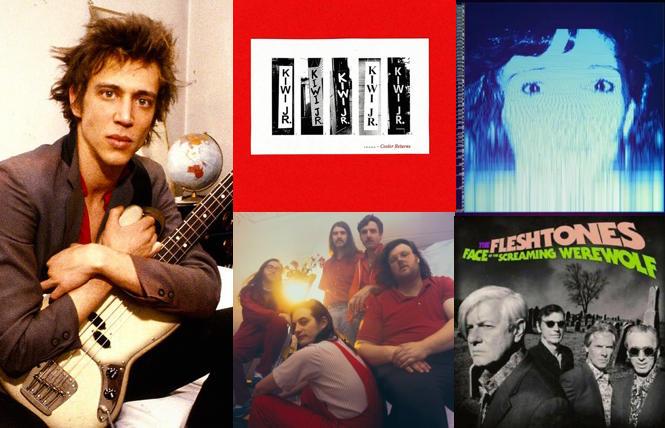 With its 1977 debut album Blank Generation, Richard Hell and the Voidoids were at the forefront of the New York punk scene. Hell, who had done time with Television and Johnny Thunders' the Heartbreakers, elevated the punk art form on the first album, but then struggled to follow it up with Destiny Street five years later. This was at a time when punk/New Wave bands (see The Ramones, Blondie, Talking Heads) were cranking albums out at about one (sometimes two) a year.

In addition to that, there are 12 tracks that make up the Destiny Street Demos (1978-1980). All of this is to say that with originals such as "The Kid With the Replaceable Head," "Lowest Common Dominator," "Downtown At Dawn," the funky, spoken title cut, and a cover of Them's "I Can Only Give You Everything," Destiny Street is a worthwhile successor.

Would The Fleshtones even exist without the groundwork laid by Hell? Keep in mind that The Fleshtones' full-length debut album Roman Gods was released in 1982, the same year as Hell's Destiny Street. More on the garage punk end of the spectrum, return with Face of the Screaming Werewolf (Yep Roc).

With more than 40 years under it belt, The Fleshtones can still rev up the listener, and themselves, into a rocking frenzy. If nothing else, The Fleshtones deserves kudos for the song "Alex Trebek," an affectionate tribute to the late longtime Jeopardy host, as well as the subtle twang of "Waiting On A Girl" and a respectful cover of the Rolling Stones' B-side "Child of the Moon."

Two young bands — Kiwi Jr. and Shy Boys — have released new albums that are as much of their time as those by Hell and the Fleshtones when they were young'uns. Energetic Canadian quartet Kiwi Jr. sounds like it might owe a debt of gratitude to both these predecessors. Just listen to "Undecided Voters," the second track on Cooler Returns (Sub Pop/Kiwi Club), which is subtly punk and garage. Throughout the 13 tracks, including "Highlights of 100," "Only Here for a Haircut," "Guilty Party," "Nashville Wedding" and "Norma Jean's Jacket," Kiwi Jr. display marvelous songcraft and musicianship, in addition to a distinctive sense of humor, something very necessary during these tumultuous times.

Talk Loud (Polyvinyl), the third album by Shy Boys, a quintet from Kansas City demonstrates that everything is up-to-date over the course of 11 songs clocking in at under 30 minutes. Beginning with album opener "In Gloves," Shy Boys envelops its Beach Boys-esque harmonies in 21st-century pop settings. That momentum is maintained all the way through the final track, "Good Thing," with "Fraid I Might Die," "Trash," "Nighttime Party," the shimmering "The Pool" and the title tune being particularly notable.

Technically, The Avalanches (Robbie Chater and Tony Di Blasi) are a musical duo. But the magic The Avalanches conjured over the course of three albums, including the latest, We Will Always Love You (Astralwerks/Modular), is much greater than the considerable sum of its parts. Sonic quilters of the highest order, The Avalanches take the art of sampling to a whole new level. Seriously, you may never listen to The Roches' "Hammond Song" or Alan Parsons Project's "Eye In The Sky" the same way again after one listen to "We Will Always Love You" or "Interstellar Love," respectively.

With each song, The Avalanches bury us in distinctive musical sculptures that seem to reveal something new with each spin. Guest artists Leon Bridges, MGMT, Johnny Marr, Mick Jones, Perry Farrell, Jamie XX, Neneh Cherry, Tricky, Kurt Vile, Karen O, and others, only add to the exhilaration.