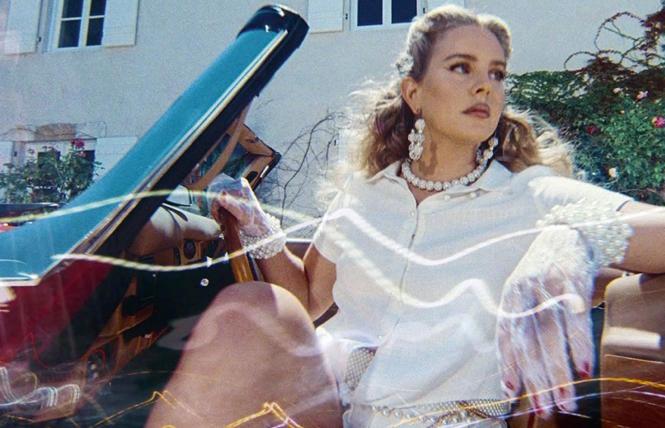 If you were an active and observant music consumer in the far-off early 1990s, then you may recall the major-label feeding frenzy that occurred launching the careers of several prominent women singer/songwriters including Alanis Morissette and Sarah McLachlan.

Atlantic Records became well-known for its female roster which included Jewel and queer singer/songwriter Jill Sobule (who kissed a girl years before Katy Perry). Juliana HatfieldJ, newly solo after her time in the Blake Babies, became part of the organization when the indie Mammoth Records label scored a distribution deal with Atlantic. This resulted in her hit single, "My Sister."

Almost 30 years have passed since then and Hatfield has continued to record, being especially prolific in the 21st century. The graphic cover illustration and album title, Blood (American Laundromat) offer hints at what's contained, but don't be deterred. This is a bloody good record, alternating between blazing rockers ("The Shame of Love," "Chunks"), potential dance classics ("Gorgon"), brilliant political statements ("Nightmary," "Mouthful of Blood," "Suck It Up") and, well, gore ("Had A Dream").

Singer/songwriter Mary Karlzen got swept up in the '90s Atlantic wave with her 1995 album Yelling At Mary, which was released by the label. Her output since that time has been somewhat limited, but she has returned with the radiant Shine (Y&T Music) album. Karlzen, who has connections to Florida and the Midwest, wears the influences of these regions on her sleeve coming up with a pleasant folksy/twangy sound that works well for her, especially on the songs "You Still Belong To Me" (a duet with Radney Foster), "The Burgeoning Road," "I'll Be There," and "Slowly Disappear," as well as rockers including "Dumb Game," "Something That I Missed" and "Say You'll Never Go Away Again."

Few artists have come into their own the way that Lana Del Rey did with her acclaimed 2019 album Norman Fucking Rockwell! Following her 2012 debut album Born to Die and its inescapable hit single "Video Games," Del Rey stumbled some but she more than made up for it with NFR!

So how does one keep that kind of momentum going? On Chemtrails Over the Country Club (Polydor/Interscope), Del Rey continues to mine the WASPY persona that has been central to her musical identity. Setting aside emotional detachment, Del Rey delivers all the feels on "White Dress," "Let Me Love You Like A Woman," "Wild At Heart," "Not All Who Wander Are Lost," "Breaking Up Slowly," and "Dance Till We Die." If you didn't think Del Rey could surprise us any more than she has, she closes Chemtrails with a respectful and respectable cover of Joni Mitchell's "For Free," making it sound like a song she was born to sing.

Last, but far from least, the legendary Merry Clayton takes us to church, literally, on her fiery new gospel album Beautiful Scars (Motown Gospel/Ode). As an in-demand backing vocalist, Clayton (who was featured in the Oscar-winning 2013 doc 20 Feet From Stardom) is perhaps best-known for providing the roof-raising vocals, alongside Mick Jagger, on the Rolling Stones' "Gimme Shelter."

Produced by Ode Records founder (and nice Jewish boy) Lou Adler and featuring the title cut by (nice Jewish girl) Diane Warren, Beautiful Scars is Clayton's first studio album in almost 30 years, and the first since a life-altering car accident in 2014. The material is a mix of the classic, including Sam Cooke's "Touch The Hem of His Garment," Leon Russell's "A Song For You" (in which Clayton finds new meaning) and an "Ooh Child Medley" (including The Five Stairsteps' anthem of hope as well as Jackie DeShannon's "Put A Little Love In Your Heart"), and new songs, such as the one co-written by Clayton, Adler, Coldplay's Chris Martin, and Terry Young.