There's so much to recommend about Daddy's Country Gold, the dazzling new album by out singer/songwriter Melissa Carper, it's hard to know where to begin. Carper's distinctive vocal style not only recalls the sounds of vintage classic country, but it also suggests Billie Holiday, especially in the Western Swing of "Making Memories" and "I Almost Forgot About You," which has the potential to become a jazz standard.

Throughout the album Carper honors country music tropes - "My Old Chevy Van" is a song about a beloved vehicle, while "Back When" and "Many Moons Ago" recall the tradition of looking back on lost love. She also strikes gold with her unique sense of humor on "Would You Like to Get Some Goats?" and then proceeds to stir our hearts with the gorgeous album closer "The Stars Are Aligned." Carper was kind enough to answer a few questions shortly before the album was released. 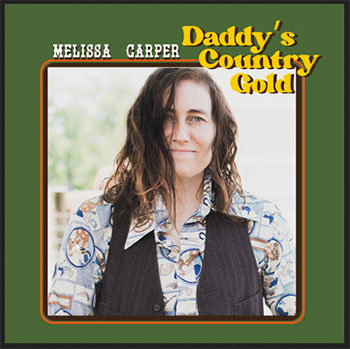 Gregg Shapiro: Melissa, I'd like to begin by talking about the title of your wonderful new album Daddy's Country Gold. If someone didn't know any better, it could be referring to a person's father's music collection. However, it could also be a reference to you and your nickname "Daddy." Am I on the right track when I say there's a double meaning at play and is that how you arrived at the title?

Melissa Carper: Well, there certainly could be a double meaning. I, honestly, was only thinking of "daddy" in reference to my nickname. It was my girlfriend's idea for a title. We were kind of joking around with it and I couldn't come up with anything better. I'm like, "You know, why not? Daddy's Country Gold." Then after deciding on it I realized that it could also have that other meaning of your dad's collection of country music. Coincidentally, my dad did have a great collection of country music that I got to listen to growing up. I'm glad it has that second meaning.

Of all the musical instruments from which to choose, how did you select the upright bass as your instrument of choice?

I don't know for sure because I was so young when I chose it. My elementary school started kids in the string program, if you wanted to play a string instrument, in the 4th grade. I was you know probably 10 years old when I chose the bass. I remember the teachers saying, "Do you think your hands are big enough for that?" And I took my hand and stretched it out as far as it could go, and they were like, "Okay!"


Regarding your songwriting process, do the words or music come first, and where do you find inspiration?

Usually I'll get like a little lyric first, like a line. And then, generally, the melody will naturally fall around that line without having to think of what the melody will be. The melody kind of presents itself with the phrase. A concept or phrase will come and then I'll go from there. I usually write without an instrument. I also play guitar. That helps me when I go back to find the chords and everything to the song. I don't go back on my bass and write the song with the bass. I'll walk or drive around, or I'll just be sitting and thinking, and the rest of the lyrics or melody will come. Then I'll go and find the chords on the guitar.

Humor plays a role in a song such as "Would You Like to Get Some Goats?" Was it important to you include that side of yourself on the album?

I would say for sure. A lot of songs that I write do have a sense of humor about them. I wanted the album to be a fun album for people to listen to. I wanted it to have a joyous feeling about it. That song in particular probably has the most humor in it. But I think a few other lines in songs have a bit of it as well.

For the most part; I would say it does have that for me. I definitely went through a phase in my life where I was drinking too much. The occupation of playing music in bars can kind of be dangerous sometimes. You get free alcohol and everyone's drinking and having a good time. I think somewhere in my mid-30s, I realized that my memory wasn't working near as well as it used to. My mind wasn't working. I don't know if that's the natural age to not be as sharp, but I also realized, "Okay, I can't be drinking this much alcohol anymore. I really have to get this under control." I was sober for an entire year and that really helped me not have to feel like, "Oh, I'm playing music in a bar and I have to take a drink."

Speaking of "Making Memories," that song and "I Almost Forgot About You" have a strong jazz influence. What would it mean to you if Daddy's Country Gold was embraced by jazz fans?

I would love that! I'm a huge fan of jazz vocalists, old jazz standards I just love so much. I'd feel good if I can write a song that would be considered a jazz song. I think some of it can be considered Western Swing, which is kind of combining country and jazz. I think that's one of the flaws of the album title, because it isn't just country. I was thinking of country along the lines of several of the songs has references to living in the country and having a farm and that sort of thing, too.


I understand that after living in Nashville, you are back in Texas.

Nashville is where I made the album and I lived there for two or three years. Last September, October I moved back to Texas. I'm actually 40 minutes east of Austin living on an organic veggie farm. Last time I lived here, I spent some time on this farm. The people who own it are friends of mine. I lived in Austin for six years before I moved away. It was a great experience for me. I moved from Arkansas.

The country tradition (in Austin) and all the folks that play country and western swing down here; it was a big influence for me. I started writing songs that were more of that style. I also had a ton of inspiration from the other musicians, the other writers down here, and the music community has been really good for me. Nashville was great, too.

Daddy's Country Gold is being released at a time when we are still at the mercy of a raging pandemic. With live performances in music halls on hold for the near future, how do you plan to get this music to your fans?

We're playing gigs again down here in Texas. When me and my girlfriend, with whom I have a band called the Buffalo Gals, moved, some of the music venues were opening up again, to less capacity and with mask rules. We've been playing pretty full-time down here; smaller and a lot of outdoor venues. So we're able to reach some folks down here with the venues that we're playing.

We do live-stream concerts, as well. I do plan on visiting Arkansas which is kind of an old home base for me. I've already booked three outdoor shows for May. I have a plan to go to Nashville in June and play at The Station Inn and have a sort of a release there with the folks that were on the album. Station Inn is doing limited capacity and they're live streaming the show, as well. I'll do the best I can to get it out there.


Being out in country music is less unusual than it used to be, with queer women such as Brandy Clark, Jaime Wyatt, H.C. McEntire, Sarah Shook and Brandi Carlile leading the charge, as well as the recent coming out of T.J. Osborne (of Brothers Osborne). And yet, just a few years earlier, artists such as Chely Wright and Ty Herndon suffered because of coming out. Speaking as a queer musician, what do you think changed?

In general, it feels like it's just being accepted more in society. I feel like there's just a broader acceptance of it and maybe that was just the natural thing that was going to happen over time. Certainly, the more we see queer people represented on TV and in movies and music, and everything, then the younger generation, and maybe even the older generation, are able to let go of some old beliefs they were holding on to.

I do know when it comes to my own family, I grew up in a family that was Christian, and I was taught to believe it was sinful to be gay, that it was not natural. I knew when I was young, when I was eight or so, I was starting to have my first crushes on girls. I knew, not like some people who realize later on. For a long time, I really struggled with it. I would pray to God to help me not be sinful [laughs] and perverted. I grew up knowing that my family —my mom and dad and my sister and my brothers— pretty much thought the same thing because that's what we were taught to believe.

But as we grew older and I finally, slowly came out to my family, they accepted me and it was okay. They were able to let go of that belief that they had. I think people can grow and change their own belief system. I think we see that happening.