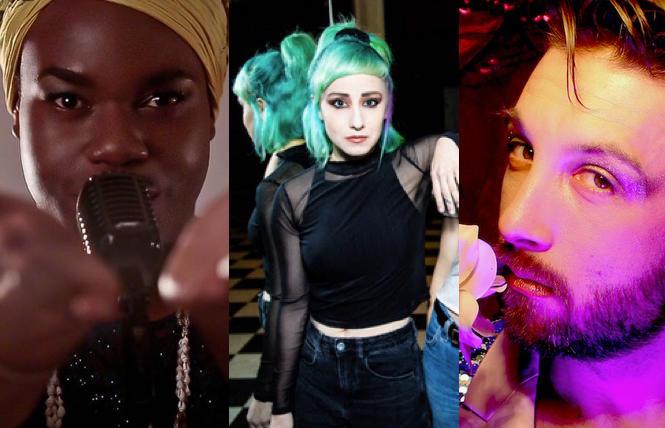 Shuttered at home, musicians are producing new songs in abundance, including local artists and longtime favorites. Also, we honor a singer-songwriter lost too soon.

J.R. Price is out now with a duet featuring his childhood hero, out artist Tom Goss. The two teamed up on "Dance with Me," an impassioned love song about the incredible power dance has to bring a couple together before the world breaks them apart. This is the second single from Price's upcoming album, Daydream.
www.jrprice.org

Samantha Sidley's "I Like Girls" could not be clearer in its sapphic intent. But with a sultry jazzy style, it's both witty and unique. The music video, directed by Nigel DeFriez, includes a bevy of women. The LA singer also performs a few great covers (like "A Dream is a Wish Your Heart Makes" from the musical Cinderella), and her debut album Interior Person is out now.
www.samanthasidley.com

For some rockin' grooves, check out Potty Mouth. "Let Go," the new single on their upcoming compilation album supporting LGBT Youth and QTPOC, titled Sunday, Someday, also features KOJI, Nervus, Solstice Rey, Full On Mone't. The compilation album was created by the group of like-minded friends and musicians from the UK, Pennsylvania, and Los Angeles. They began meeting virtually every Sunday from April 2020 onward after the tour they were supposed to go on together was canceled due to the pandemic.
www.sundaysomedayrecord.com

Kids today, huh? At only 15, Cody Newman has acquired thousands of fans and followers. While her newest song isn't quite out yet, the nonbinary singer-songwriter has several original tunes and covers on YouTube. The new acoustic song, "I Want To Learn To Love Me" will be out on February 26.
www.codynewmanmusic.com

Many of us have endured the loss of a beloved pet. Indigo Girls' Amy Ray offers this stirring musical tribute, "Muscadine," to her beloved dog. The song was remote-recorded with members of the Amy Ray Band and produced by Brian Speiser.

"I wrote this song after one of my oldest dogs passed," said Ray in a press statement. "Regardless of living deaf and blind for his last few years, he was always willing to go on adventures with me in the woods. He might run into a few trees along the way, or fall in a little ditch, but he always got up and carried on. I started the music from a riff on acoustic guitar, with some inspiration from Brent Cobb records, and the idea of simple parts that add up to capture a certain ache I was feeling. In the end, it's a country tune about learning to love and receive love in the purest way, and to not be picky about life, but to stay the course with curiosity and gratitude."
www.amy-ray.com

In sad news, New York-based gay dance music singer Ari Gold died on February 14 after a long battle with cancer. He was 47. With seven albums, he became a success known for dance anthems, ballads and remixes.