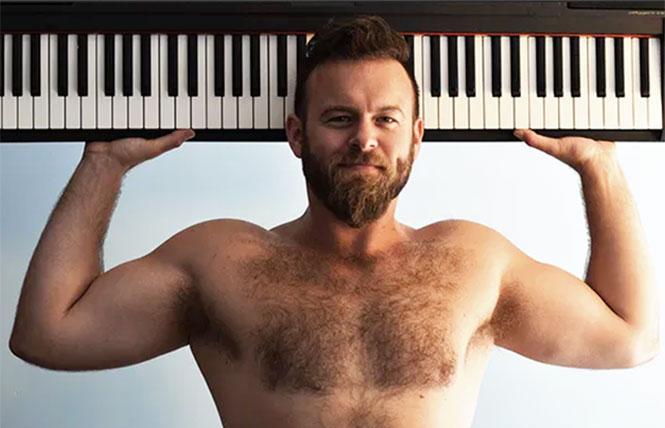 In more ways than anyone would care to count, the COVID-19 pandemic has changed the way we live. Near the top of the list are the ways in which we experience music. Live music venues —from concert halls and intimate clubs to festivals and cruises— were hit the hardest and the future of these performance spaces remains uncertain.

Staying productive
Fortunately, we still have plenty of recorded music to enjoy while we face the possibility of both a vaccine and further lockdowns. Some musicians have used the opportunity of isolation to create albums.

Gay singer/songwriter Mike Maimone recorded two solo albums; Isolation: 001 consists of original songs and Borrowed Tunes, vol. 1 is cover versions (both at www.mikemaimone.com). Gay smooth jazz artist Dave Koz has the wonders of modern technology to thank for his A New Day (Just Koz) album, written and recorded (with guest artists, no less) in separate studios during the pandemic.

Bay Area-based lesbian singer/songwriter Rachel Garlin wasn't sitting idle during the pandemic, releasing her new Julie Wolf-produced album, Mondegreens (www.rachelgarlin.com), as well as performing the weekly Sidewalk Sessions, live shows from the garage of her Noe Valley home.
Scott Free wrote "This Is Not Our Government," about the CARES Act, during the pandemic, making it a last-minute addition to his politically-oriented The Last Revolution (Leather/ Western) album.

Listening to lesbians
Lesbians excelled in 2020. The Greatest Part (Captured Tracks), the breathtaking /second album by out singer/songwriter Becca Mancari, available in a limited edition clear pink vinyl LP version, is a sonic departure from her Americana-laced 2017 debut Good Woman.

Working with musician/producer Zac Farro (of Paramore fame), Mancari created a forward-thinking audio landscape for her deeply personal lyrics, some of which deal with being raised in and surviving a strict religious background. Songs such as "Hunter," "Stay With Me," "First Time," "Like This" and "Tear Us Apart" deal with heavy subject matter, but the unique musical settings have the ability to transport the listener to another place altogether.

North Carolina-based H.C. McEntire also released an exceptional second album, Eno Axis (Merge), which expands on the promise of her first record, delivering ten awe-inspiring songs (including the instrumental "Sunday Morning" and a stunning reinterpretation of Led Zeppelin's "House of the Holy").

The third sophomore album included here is the gorgeous Our Two Skins (Jagjaguwar), by queer singer/songwriter Gordi (aka Sophia Payten), which ranged from the soul-baring opener "Aeroplane Bathroom," the early Rickie Lee Jones-esque "Radiator," as well as "Look Like You" and "Volcanic," to the livelier "Free Association," "Unready," "Sandwiches" and "Extraordinary Life."

Newly out singer/songwriter Jaime Wyatt, a distinctive artist whose hard scrabble life has led to sobriety and embracing her queer identity, addresses these subjects on her exceptional new album, Neon Cross (New West), earning her a rightful place among the current crop of reigning country divas.

Singer/songwriter Susan Werner is a national treasure, which she continues to prove with each consecutive album, including her latest, the Americana-style Flyover Country (www.susanwerner.com). Over the course of the ten songs, Werner gives us something to think about ("Snake Oil," "Only Later," "Barn Radio"), swoon about it ("How Much") and even smile about ("Wine Bottles").

Coming out
Coming out was popular during the pandemic. Maria McKee, best known as lead vocalist for '80s cowpunk band Lone Justice ("Ways to be Wicked" and "Shelter"), had a decent solo career (and hit single "Show Me Heaven"), with both major label and independent releases. She also wrote songs covered by Bette Midler ("To Deserve You" and "The Last Time") and Feargal Sharkey of The Undertones ("A Good Heart"). La Vita Nuova (American Fire), McKee's first album in more than a dozen years, fittingly translates as "new life," as McKee came out as queer.

Singer/songwriter Cidny Bullens, who came out as trans in 2012, had a lengthy recording career as Cindy Bullens. The powerful personal statement Walkin' Through This World (Blue Lobster) is Bullens' debut album as Cidny. The compelling songs on Indistinct Conversations (Saddle Creek) are said to be inspired by Canadian band Land of Talk's lead vocalist Elizabeth Powell's coming out as a non-binary femme.

Brittany Howard, the magnetic and supremely talented former lead singer of the Grammy Award-winning band Alabama Shakes, came out, got married and released her solo debut album, Jaime (ATO), named for her older sister who died at the age of 13 (when Howard was nine), and the eleven songs are everything you'd expect from a Brittany Howard solo album and then some.

Look for part 2 of Gregg Shapiro's Best LGBT Music in next week's issue.