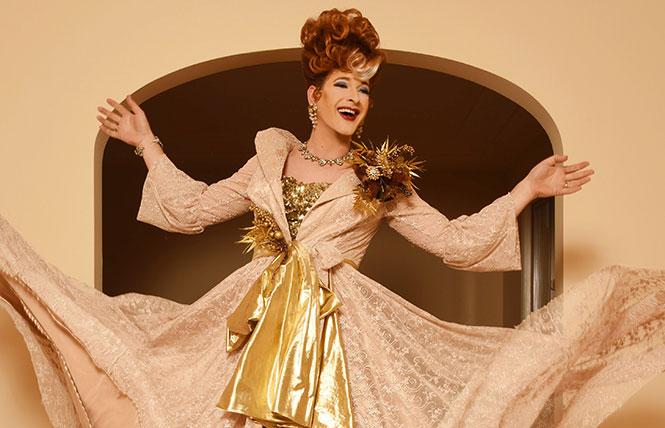 While fancy cocktails won't be served by waiters, you're welcome to imbibe at home as Katya Smirnoff-Skyy, our favorite local exiled Russian opera diva, takes to the online airwaves in a holiday-themed concert that'll make the Yuletide extra-gay.

This won't be another mere solo Zoom chat, but through the miracle of green-screen and other technologies, you can enjoy a fully staged cabaret concert with multiple musicians and guest-stars.

"I started the week we went into lockdown back in March, with two 'Quaran-Tuni' shows a week, then one; about fifty shows in all," said J. Conrad Frank, who has been performing online shows as his well-known drag persona Katya since March, and in-person at Martuni's for 15 years. The actor-singer performs from his apartment in "the Swish Alps" (aka Twin Peaks). But this show will be a bigger production. 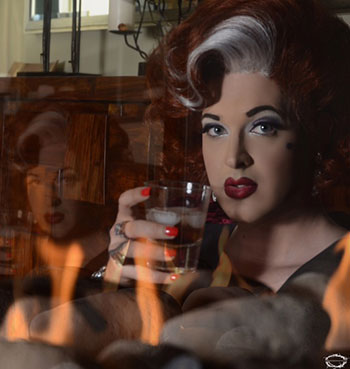 "This Spectacular will be a live and filmed project performed with seven musicians playing remotely to create my sort of 'sound garden,'" said Frank. The show will include new songs, plus elements from his 14 years of holiday concerts, which played at The Rrazz Room, Feinstein's at the Nikko, Oasis and other venues.

"It's a sort of throwback to the classic holiday shows performed at Radio City Music Hall, or Judy Garland's specials, which were taped at her 'home'" (actually a studio set, of course).

Along with a wacky take on traditional holiday songs (and TV special favorites ranging from A Charlie Brown Christmas to Alvin and the Chipmunks), as usual, Katya will perform new twists on classic holiday tunes, from Peggy Lee to Tina Turner.

Conrad grew his character Katya (an exiled Russian countess) 15 years ago when pianist extraordinaire Joe Wicht (aka Trauma Flintstone) asked him to perform in his Bijou cabaret series at Martuni's bar. Since then, he's performed numerous times as Katya, first as part of New Conservatory Theatre Center's Young Artists Program, and then at NCTCSF in several roles in and out of drag, including Charles Busch's Red Scare at Sunset and Die, Mommy, Die!, Jonathan Tolins' Buyer and Cellar, and John Marans' The Temperamentals.

Other notable performances by the Vocal Performance graduate of the University of Oregon include lead roles in Billy Clift's darkly comic films Baby Jane? and Hush Up, Sweet Charlotte, Ray of Light Theatre's Rocky Horror Show and Sweeney Todd, and in Artful Circle's Jungle Red as gossip hound Sylvia Fowler.

Frank's performances as Katya (particularly the monthly Katya Presents at Martuni's) have won SF Bay Guardian Best of the Bay and B.A.R. Bestie awards. His 'Spectacular' show has evolved over the years. He's tried to keep it fully staged —at a distance this time— to support the other performers and technicians. Thus, the concert does have an admission fee to support them, with special perks.

"You want familiarity, but also something new," Frank said of the December 19 show. And unlike some drag performers who specialize in insult comedy or crass humor, with Katya, an effusive and offbeat persona, a sense of empathy is crucial to her concerts.

"I have grown to have a great affection for this person I've lived with now for 15 years," said Frank, whose statuesque persona is known for fabulous couture and wigs. "She's become a fully-rounded person who takes joy in performing, and in some songs, imbues some genuine sadness. For true comedy to work, you need a bit of pathos."

It's that balance of glamour, slightly off-kilter song interpretation, and boozy endearment that's gained Katya so many fans. Along with this year's online concert, Frank mentioned that, as Katya, he's grown a new generation of devotees on TikTok (@katyasmirnoffskyy), where Katya offers 'auntie advice' to the young'uns, and has found fans among parents of queer kids. Katya also has already snagged ticket sales from patrons in Germany, Italy and in cities through the U.S.

Katya will travel, too, in the concert —virtually, at least. "We'll take you to unexpected places," said Frank, "with Katya as a living breathing entity. There will be moments of heart and truth. In a year when none of us are spending the holidays the way we hoped, with so much flux and change, it's important to remind viewers to do what they can to make someone else's life a little better."

Katya, a Holiday Spectacular! airs December 19, 6pm PT.
$25 and up (with special gifts; $50 includes admission to a live after-party. $75 includes a personal holiday greeting for you or a friend. $150 includes a wrapped gift.) www.katyasmirnoffskyy.com