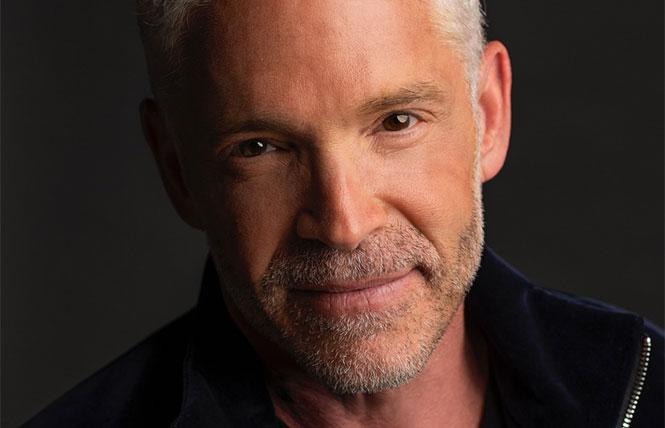 It's been 30 years since gay, smooth jazz superstar Dave Koz released his eponymous major label debut. Since then he has gone on to release more than a dozen studio albums, including his latest, A New Day (Just Koz), as well as a handful of Christmas records.

Koz's association with the winter holiday season also resulted in his popular Christmas tour, featuring an array of special guests, which would have celebrated its 23rd year, if not for the pandemic. Koz has remedied the situation by organizing a new, one-night-only live virtual concert event, "Dave Koz & Friends The Greatest Hits of Christmas 2020," scheduled for December 12, 2020 at 5 p.m. PT/ 8 p.m. ET via Looped.

Additionally, in the spirit of the holiday season, Koz has launched "12 Days of Kozmas," featuring music, as well as giveaways which include Dr. Norm's Cannabis-Infused Hanukkah Cookies. Concert tickets and more information about Koz's projects can be found at www.davekoz.com.

Gregg Shapiro: Dave, in the press materials for your upcoming holiday show — "Dave Koz & Friends: The Greatest Hits of Christmas 2020," you are referred to by the truly inspired moniker "Santa Koz." Who gets the credit for coming up with that?
Dave Koz: [Laughs] I think I've been hearing that for a number of years. I can't remember who actually came up with it first, but for a nice Jewish boy being on the road for what would have been our 23rd annual Christmas tour, and I have had seven Christmas albums over the years, I think it's a name that is quite fitting. Especially at this time of year, I usually end up feeling like Santa Claus. Not as much this year because we're not out on tour, sadly. But it's a name I wear proudly.

With so many holiday favorites to play, and so many new ones being written all the time, including by you, what's involved in deciding which songs are a good fit for the show each year? 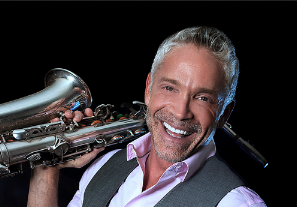 It really is reflective of our ever-evolving cast of characters. One of the reasons why I think this show has been around for as many years is it's never the same. The intention of the show is the same every year. Over the years people bring their kids. Those kids are now grown up and they bring their kids.

The feeling is very nostalgic. It feels like a family get-together at these venues that we're playing at every year. The cast will dictate how the show evolves from year to year musically and creatively.

The nice thing is that Christmas music is so adaptable to pretty much any style. You could have a wide variety of different types of artists very much peacefully coexist in the Christmas show. These songs are so great; there's so much meat on the bones. They're more than just songs. Many of them are like prayers.

A song like "Silent Night," for example, the minute you play it, it captures the essence of the holidays in such a profound way because it's a piece of music we've been hearing since we were babies.

They carry with them a lot of emotional impact. Even the more poppy songs like "The Christmas Song (Chestnuts Roasting on an Open Fire)," that's more of a pop Christmas song as opposed to a religious one, but they all have this innate power to communicate a message and make you feel something. That's why I have so much profound respect for these pieces of music.

If I remember correctly from last year, as well as this year, you've brought new vocalists with you on the Christmas tour, in addition to regulars, such as Jonathan Butler. How do you go about finding these vocalists who are making their debuts?
Fortunately, because of the other things that my team and I do during the year, we're put into a position where we can see a lot of these incredible talents. The actual place where I find most of them are when we do our cruises. Not this year or next year, sadly; we've had to postpone the cruises because of COVID.

But in a normal year, we're doing cruises and because there's so much music, you can't have superstars in every venue. You have to go to the baby acts and find these really talented younger people that can play the smaller lounges on a cruise ship for us, and you know that they're going to deliver. I've been turned on to so many unbelievable artists. In fact, this phenomenal female vocalist name Rebecca Jade (who is part of the Christmas tour), I first saw her on one of our cruises. She was the female singer in the party band. I watched how she would turn a room out.

These were the late-night parties. She's such an incredible singer and an unbelievable entertainer. That's why we became really great friends and I started listening to her music. That's when we had the idea to invite her as our special guest this year. She was going to do the tour this year, and sadly that's not happening, but she will be part of our special Christmas live stream. She's unbelievable, Gregg!

Musical guests are also a common occurrence on your albums, including your new album A New Day which features Brian McKnight, Jeff Lorber and David Sanborn. As a legendary fellow saxophonist, what did it mean to you to be able to collaborate with Sanborn?
I've been like a psycho fan of David's since I picked up the instrument. I remember being a 13-year-old kid in my bedroom playing his records on my hi-fi stereo. I was so proud of my stereo. I would play his records and practice along with them and try to learn his phrasing. Worshipping this guy!

Many years later, I was able to meet him. We became colleagues. We did a tour together. I got up the nerve in 2016 to ask him to be a guest on tour and he did do that. It really cemented our friendship in a significant way. The one thing that eluded me with him was actually recording a song. Here we are, in COVID, it's a pandemic, it's quarantine. He's quarantining in his house in New York. I'm doing the same in Los Angeles. Somehow we were able to write a song together and have him appear on the album. I'm proud to say that song is the number one song in America on Smooth Jazz radio at this very moment. 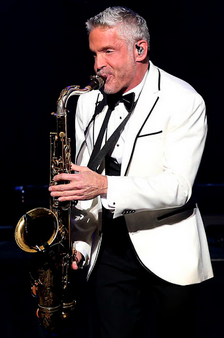 Congratulations!
It's a pretty full-circle moment. If you're awake enough, you never lose sight of that 13-year-old kid. This is such a 'pinch me' moment. I've been doing this for a very long time, but to have something like this happen with this album after 30 years of doing it, it's the kind of sweetness that's very hard to put into words.

A New Day is also notable for being your first album of original material in ten years. Were the originals written over the course of the 10 years or in one creative burst timed for the new album?
These are songs that were written in COVID. I was not sure of the type of record that I was going to make. I was itching to make a new album of original material, but I didn't really have the sort of creative impetus. Then the pandemic hit and it was like the clearest indication to me that this was the intention for the album; just to make music. I was just observing my own behavior. Here we are in lockdown and what did I do?

I went to all of my music that I go to when I am feeling stress and unease. It made me feel better. I think maybe this is what I should be doing right now as opposed to just sitting on my ass. Maybe I should get my ass in gear and record some songs that will hopefully bring some lightness and brightness to people who are going through this terribly intense time. All the musicians, singers and engineers, everybody who worked on this project -- we were all home.

Everybody was available. Not just available; but itching to sink their teeth into a musical project. I think there's a level of emotion and resonance to this music that hasn't been in my other music just because I think everybody really grabbed on to the intention of this album. We're doing something together to help some people out during a very rough time. It miraculously came together very quickly. Albums just don't come together this quickly, especially in a pandemic. Nobody was in the same room together at all. Somehow, miraculously this album popped out.

The wonders of technology. A New Day opens with "Summertime In NYC," Summer Horns albums in 2013 + 2018, as well as a cover of "The Summer Knows" on 2007's At The Movies. Is summer your favorite season?
[Laughs] I've never made that connection before! I love the summer. It's a great time to be on tour in any other year; not this summer, sadly. I think that when I think about the pure essence of the music that I make or jazz in general, it goes really well together with outdoor festivals, with wineries, with jazz festivals which are outdoors during the summer. 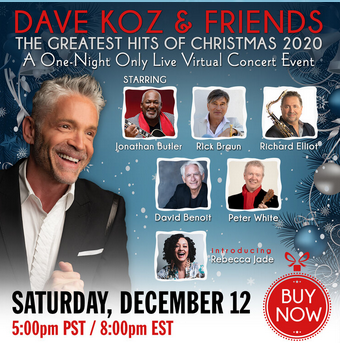 At its core, the music is meant to be celebratory and fun. I love seeing our audience, which is made up of everybody. That's the thing that makes me probably the proudest. Not just my music, but this genre of music, call it smooth jazz or contemporary jazz, appeals to everybody.

You've got young and old and gay and straight and Democrat and Republican and black and white, actually every race. It's really a melting pot of a genre. Everybody gets along and supports each other in our world. At a summer festival you see all these different types of people getting up and dancing with each other. Especially given how conflicted our nation has been in the calendar year 2020, to be able to see the music bring people together, as cliché as that may sound, I see it happening every summer.

While this is an album mainly comprised of originals, you include a cover of "Yesterday." What are the challenges and rewards of covering a Beatles tune?
I've always loved that song. Admittedly, my intention was to make a fully original album. But then I was listening to the SiriusXM Beatles channel. I breeze past there from time to time; I'm a big fan of that music. I heard that song again. I had never recorded it before, but I always loved it. When I heard the lyrics to it, and if you listen to the lyrics through the lens of COVID-19, there is a certain quality to that song that really connected to me emotionally.

This is a very forward (thinking) album, talking about a new day coming. At the time, we didn't know what was going to happen with the election. Intuitively I felt like we were going to a better place. You can't necessarily know where you're going to without looking back and reflecting on your past. That's why it exists. It's not just because I love that song, but I do. Matt Cusson, who's this amazing vocalist and arranger, did the arrangement of that and totally made it new.

It seemed, thematically, like a good idea to include that song in a very forward-thinking album; to at least have one moment where we're looking back to inform us where we're going in the future. 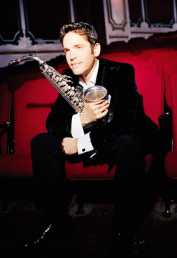 Putting the top down with Dave Koz 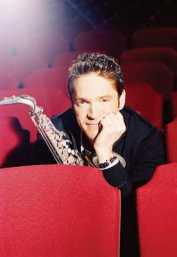 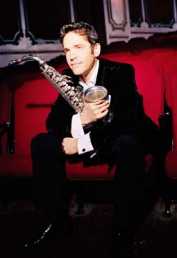