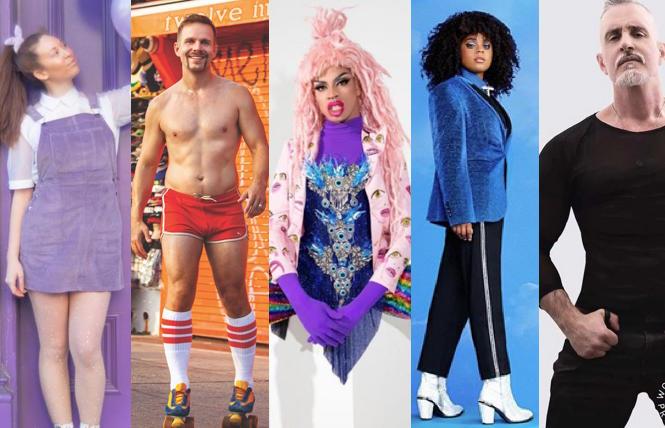 While live concerts are mostly still on hold, LGBT and nonbinary musicians continue to release new music at a steady pace. Whether you're into folk-rock, dance grooves or R&B hip hop blends, queer artists and allies are making music for any mood. Here are twelve innovative music acts to add to your playlist. 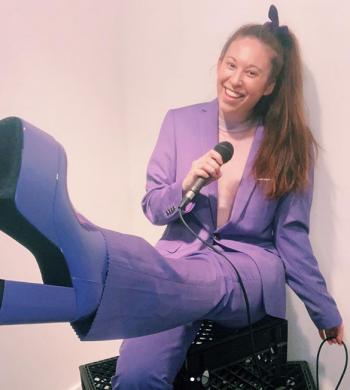 Criibaby
Starting off with some Bay Area talent, Cribiaby's melodies and vocals balance feather-light intimacy with hearty R&B beats. Her new single, "Love Songs for Everyone," was written specifically to be gender-neutral. The openly bisexual singer-songwriter.

"By intentionally avoiding gender-specific words like "she" or "he" the music becomes more inclusive, and refrains from promoting a heteronormative, gender binary-focused viewpoint of relationships," she said. "This kind of intentional inclusivity is desperately needed in today's media."

Eveta
Argentinian, Canadian, American? Eveta has lived in each country, but his music transcends borders.

"I grew up with four women and feminism is ingrained in me," says Eveta, whose music reflects his LGBT identification. "At the same time, I learned the term 'serve,' which came up in the LGBTQ community as a way of cheering drag queens but then extended to pretty much everyone using it. Serving looks, serving face, serving attitude. Serving is a lifestyle."

The Dust Bowl Faeries
Think Americana by way of pagan cabaret, and you might vibe with queer/gender-fluid vocalist Ryder Cooley and her band. Song inspirations range from our current COVID crisis ("Pandemic Tango") to misogyny in the music industry ("Sirens") and the mythical Kraken reimagined as a belly dancer ("Serpentine Samba").

Tom Goss
Our man crush for the adorable Tom Goss continues, even though he's married and into bears. Ah, well, his music can be enjoyed by anyone, but especially for those who long for a male-on-male lyric. And Goss has long been producing gay-specific music.

Timed for the new year, Goss also has a 2021 calendar for sale. His beautifully shot music video, set in and titled "Amsterdam," stuns with intimacy and visual expanse. Check out his travelogue of songs ("Berlin," "Quebec,") from his latest album, Territories.
www.tomgossmusic.com
YouTube channel

Meg Myers
Before we get to the bouncier beats, let's get meditative with some sweetly intimate sounds from Meg Myers, whose collaboration with nonbinary singer-songwriter morgxn, "I Hope You Cry," might just do that. Heartache gets an accompanying beautiful song full of winsome emotions.

"Humans bottle things up, hold things in, sweep things under the rug," said Myers in a press statement. "That's what most of us have been taught to do and I feel that is what keeps us in suffering. It was beautiful to be able to connect with morgxn in a way that, to be honest, most men are afraid to. To be vulnerable, to be real, to allow yourself to be seen, that is true strength. 'i hope you cry' is permission to do that."

Her other songs draw you in with a dramatic impact (Try not thrashing along to the powerful "Tear Me To Pieces" or smashing some plates along to "Numb"). It's no surprise that her recent cover of Kate Bush's "Running up That Hill" became a huge hit, with a million-plus YouTube views. Myers' two new EPs release Nov. 13.
www.megmyers.com
YouTube channel

The Kinsey Sicks
Our favorite drag-apella group —okay, the only drag-apella group— continues to create sardonic parody songs and trend-relevant anthems. After their continuously sold-out tours were put on hold, they still manage to keep making music. Quarantunes, their new collections of songs, releases on Tuesday October 27, 6pm PST on Facebook Live. Join Winnie, Angel, Trixie, and Trampolina in their first live appearance together since the start of the pandemic, with a Q&A as well.
www.kinseysicks.com
YouTube channel

Yvie Oddly
Speaking of drag, it's as if a new RuPaul's Drag Race contestant pops out a song or online show every day. Yvie Oddly is one with a unique style. The Denver-based performer's single, "Drag Trap" blends sass and hip hop grooves into a wacky visual story. Her new album includes nine other songs like "Chicken Dinner, Grind Me Master, "and the, um, poetic "Garbage Juice."

"My inspiration for Drag Trap comes from all sorts of places," said Oddly in a press statement. "When Season 11 aired and my life changed drastically I began writing raps to help me navigate my emotions. So the songs range from the pressures of fame, to my health, sex, and being a queer Black American ... and just everything I needed to get off my chest." Okay, off it has gotten.
www.oddlyyvie.com

Tayla Parx
With no less than Michelle Obama as a fan, Tayla Parx will bring you back to the good old days, you know, when our leaders could speak in complete sentences and the economy hadn't tanked. With bounce, steady bass lines and clean sweet vocals, Parx' catchy songs will bring up your mood, specifically in any version of her affable (I Don't Want to) "Dance Alone."

Hailed by Insider as one of "the 18 best LGBQ love songs of all time," the disco-infused track earned 1.2 million+ Spotify streams (including placement on Michelle Obama's #BlackGirlMagic playlist).
www.taylaparx.com
YouTube channel

"We need music and entertainment now more than ever, to help us cope and get through these difficult times, to give us hope and lift us up," Ford told Instinct magazine. "With the uncertainty of our future right now it may be a while before we return to some sense of normalcy. If we wait until everything is more settled, we could be waiting and delaying things for quite some time."

Look for his new single, on his YouTube channel October 27.

Antiboy
Gender-blurring, electro yet emotive, the late Harry Hain's music as Antiboy remains as his legacy. The Australian 3D artist and designer, who died in 2020 at age 27, blended his talents in music videos in an idealistic dream of a "genderless transhuman" existence. His publicists at Press Here describe his music as "the merger of the human consciousness with artificial intelligence, of non-binary existence opens up a conversation about what the future of our species should and could be."

Kylie Minogue
Even the least pop-aware homo knows that Aussie singer Kylie Minogue loves her gay fans, and they love her right back. The super-popular singer's "Disco" album will be out soon, but in the meantime, groove to "I Love It." Minogue's concert video 'Infinite Disco' will steam globally on November 7, with her full album releasing the day before. www.kylie.com

Fab the Duo
Trying to work off your 'COVID Belly' (those extra shelter-in-place pounds)? Crank up Fab the Duo's "Party for Two" 'WerkOut' video. Greg Driscoll and Brendan Eprile, the super-gay, super-glam couple (They met on Tinder!), offer a party in your home as they tear up the floor with each other alongside a quartet of energetic backup dancers, offering inspiration in a time when it's needed most.

"I know the world is frustrating and angry and oh so annoying," they say. "But sometimes you've got to close your eyes, grab that bottle of wine and dance the night away."

Catch up with the gay duo's queer EP tracks "I Want a Man," "No Prince Charming" and the energizing anthem, "Out Love is Resistance" set in and outside New york City's Stonewall Inn. You can't gayer than that.
www.fabtheduo.com
YouTube channel