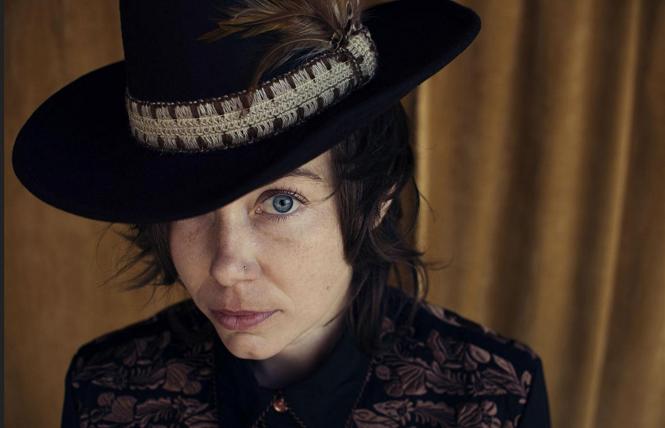 With her 2018 solo debut album Lionheart, H.C. McEntire, whom many fondly recall from her time in the trio Mount Moriah, officially introduced herself as a queer singer/songwriter worthy of our time and attention.

On her exceptional second album Eno Axis (Merge), the North Carolina-based McEntire expands on the promise of the first record, delivering ten breathtaking songs (including the instrumental "Sunday Morning" and a stunning reinterpretation of Led Zeppelin's "Houses of the Holy"), resulting in one of the best albums of 2020. McEntire was kind enough to answer a few questions shortly after the release of Eno Axis.

Gregg Shapiro: Your new album Eno Axis opens with "Hands For The Harvest," which sounds to me like a musical prayer reminiscent of "A Lamb, A Dove," the first track on your 2018 solo debut Lionheart, in that both songs gently lure the listener in before the songs that follow burst forth in various tempos. Was that intentional or coincidental?

H.C. McEntire: Choosing "Hands for the Harvest" as the lead track on Eno Axis was intentional, yes. Sequencing songs for an album is so powerful and important. I wanted to establish a tone of intimacy and warmth and rawness. The first few lines served as a mantra for me as I was living/writing this album ("Early rise/start the fire/till the rows/pass the tithes"), so this song track felt like a fitting spiritual introduction to the general mood of gratitude and self-introspection. 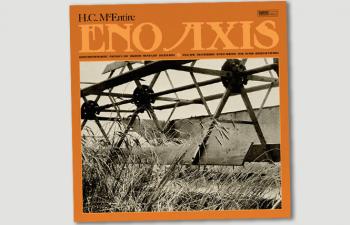 If I'm hearing it correctly, "Time, On Fire," which includes the lines "No good night's rest/No lips to press" as well as "She will leave/Like she appeared/Eager-winged/Hummingbird" burns with loneliness. Am I on the right track?

Yes. "Time, on Fire" was the first song I wrote for this album. It's my way of symbolizing the break-up I was going through at the time. Initially, it was really sad and slow, but as time went on it became a pop song, still about loss and heartache, but from a more healed perspective.

The ongoing turmoil in the U.S. under the current regime has found its way onto Eno Axis in the song "One Eye Open," with the lines "That criss-cross flag/Is flapping in the wind/And the crosses burn/Til the morning." As a queer person, living in the south, please say something about the need to address this in song.

In some way, I've been trying to write "One Eye Open" since I was a child. The timing with which it found its footing and was recorded (pre-March 1, 2020) is almost eerie when you consider the relentless and robust activism around race and discrimination that globally began this spring. I grew up in the Southern Baptist church and wanted to write about this feeling I didn't have words for at the time, but knew in my body it was incongruent; the hypocrisy of racist ideology within religious leaders/communities.

I'm always intrigued by what songs a singer/songwriter chooses to cover. Eno Axis closes with your rendition of Led Zeppelin's "Houses of the Holy." Why did you choose that song?
I knew it would be an exciting challenge to take a song from such a popular band and totally re-imagine it. There was room for me to do that. Mostly, I loved the lyrics: "Let me take you to the movies/Can I take you to the show?" ... such a simple ask, but I thought about when I was younger and hadn't proudly come out as queer; that deep longing to take a girl on a date. Playing with the dynamics of gender and sexuality and power and lightness and darkness was really inspiring, particularly given Led Zeppelin's overt masculinity, misogynistic tendencies, and rumored occult connection. 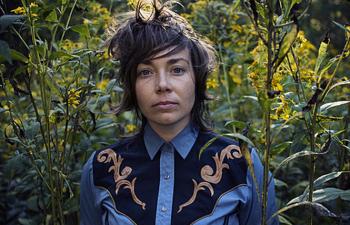 In the favorable Pitchfork.com review of Eno Axis, the writer calls you "a skilled poet" and compares your writing to the late poet Mary Oliver. Did your college creative writing studies involve much poetry reading, and if so, is Oliver someone you consider an influence?
Yes, I have a B.F.A. with a focus in poetry from UNC-Wilmington. Mary Oliver is most certainly an influence, one of the biggest —alongside Wendell Berry and Joan Didion— and to have my work be compared to hers is the biggest honor. I'm drawn to writers who are entranced with the natural world, who find immense joy and meaning in being students of nature.

I enjoy writers who walk a line of imploring balance in conviction and curiosity, who can see such profound meaning in simple things, who share hard-won wisdom but also acknowledge failure and error and misjudgment. I like writers who can take on complex and intense concepts using simple observations of humanity and ecology. Like Didion's way of storytelling with precision and pacing and devotion to tone.

Angel Olsen, who sang on a couple of songs on Lionheart, took you on tour with her as a backing vocalist. What was that experience like for you?
It was an invaluable experience, learning how to support someone else's vision and literal voice in the spotlights on such large stages across the world. I love singing with Angel, and I was moved every night by her skillful writing and otherworldly vocal ability. I'm grateful and look forward to collaborating again one day. We're close friends.

In 2019, Tanya Tucker released an album produced and written by out singer/songwriter Brandi Carlile. If you could collaborate on an album with a country music legend, who would it be? Is there any chance there could be a Reba McEntire sings H.C. McEntire album?
[Laughs] well, wouldn't that just be a golden marketing opportunity? McEntire + McEntire. That sounds pretty good to me. When do we start?

With COVID-19 pretty much bringing live performances and concert tours to a standstill, what are your plans to get this new music out to your fans?
I'm finding joy in making videos and merchandise and doing interviews, letting this album speak for itself. Seems like it will be a while before the world can safely engage in live events, and performing is such a big piece of it all for me, so I'm having to figure this out as I go. I've thought about venturing into more interactive and intimate infrastructures like Patreon for inspiration and financial stability, or just a more engaged social media presence with more unique content.

We're speaking less than two months from the 2020 election. Do you consider yourself to be a politically active artist, and if so, in what ways will you be making yourself heard during election season?
Yes. Well, first off, I'm voting. Also collaborating on some virtual progressive rallies and campaigns.