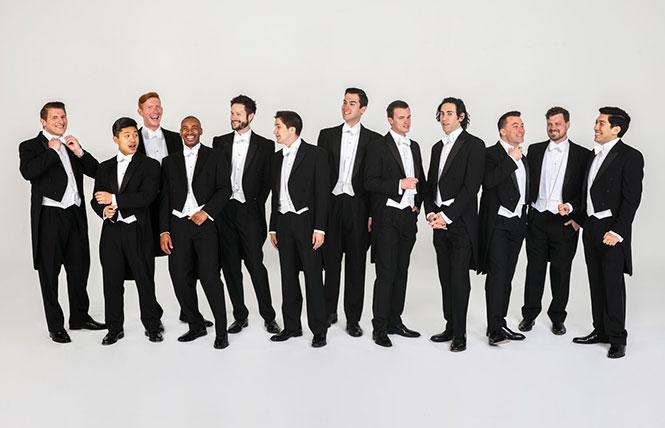 There is little doubt that the pandemic has had a devastating impact on the arts, both locally and nationally. Theaters, museums, concert halls, and movie houses have closed. Exhibitions, events, and performances have been canceled. Work has dried up and revenue has disappeared with entire seasons wiped out. Estimates of losses are estimated at $7 billion so far and rising.

Arts groups are trying to adapt to unchartered norms by trying to find new audiences virtually with streamed digital content. They are also desperately seeking to return to live performances while reducing the risk of COVID-19 transmission by maintaining the safety of both their employees and audiences.

Yet at such a time of loss and separation, it can be argued we have never needed the arts more, both as a distraction from all the chaos, but through building a sense of community they remind us of a shared cultural heritage, that can bring us together while bridging our differences. 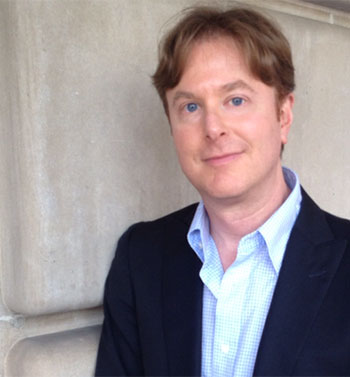 Chanticleer, founded in 1978 in San Francisco and dubbed by The New Yorker magazine as "the world's reigning male chorus," is not immune to the disruption engendered by the coronavirus. More than 40 events and concerts, including a month-long tour of Australia and New Zealand, had to be scrapped.

Amid all this upheaval, Fred Scott, Music Director for the past five years —tired of commuting from his home in Atlanta and after a long fulfilling career as an opera director, orchestra conductor as well as choral leader— announced his retirement, as did Christine Bullin, General Director, for the last twenty years.

The good news is that both positions will be filled with former Chanticleer countertenor ensemble members. Tim Keeler, previously Conductor of the University of Maryland's Men Choir, will become the new Music Director, while Philip Wilder will assume the General Director position, after just finishing his stint as Executive Director of New Century Chamber Ensemble. They both spoke with the Bay Area Reporter in an email interview.

When asked how the choir is coping with the pandemic, especially not being able to tour and sing live, Wilder replied, "Touring has been the backbone of Chanticleer's activities for years, garnering fans all over the world, and supporting the full-time employment of our wonderful ensemble. The sudden end to touring last March has affected all parts of the organization, including the loss of that critical revenue." 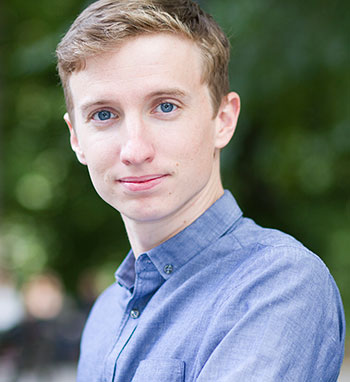 Keeler remarked, "So much of our identity pre-COVID was wrapped up in live performances. While we hope to get back there soon, we've been using our time away from the concert stage to explore other media and opportunities, including virtual collaborations, digital master classes, and streaming concerts on the internet. We haven't done much touring since March, but we certainly haven't had much 'spare time,' either!"

Individual singers have posted quarantine videos, but the entire ensemble came together to produce their first music video in years, safely sung from their individual homes, the aptly-named Ella King song "Distance," available on YouTube.

Keeler played an essential role in its creation. "I arranged it as part of my audition process for the music director position," he said. "I had originally conceived of it as part of a program about separation. When the ensemble found themselves in lockdown at the end of March, it seemed to be a very fitting undertaking to make it into a virtual choir video."

When queried about their future plans for Chanticleer, Keeler noted, "Chanticleer will embrace our sterling reputation and tradition even as we look forward to new repertoire and concerts and collaborations. We'll continue to highlight the group's history with early music, spirituals, and jazz, while also looking ahead to new commissions and new modes of presentation related to contemporary purposes and media."

Wilder responded, "I look forward to a future of bold projects and expanded community engagement in the Bay Area. The current situation has created a unique opportunity for Chanticleer to explore the possibilities of filmed performances, and I look forward to the continuation and growth of that medium."

Wilder sees his past experience with the New Century Chamber Ensemble as being beneficial to Chanticleer.

"There are a lot of similarities in the way that both ensembles create their art. Both ensembles perform without a conductor and make many decisions collectively, and both are internationally recognized and uniquely representative of Bay Area innovation. I learned a great deal during my tenure with New Century, and gained an even deeper understanding of the Bay Area arts community. That experience and understanding of our community has proven to be a great asset as I return to Chanticleer in this new role."

Societal awakening
Chanticleer has had a long history of promoting student youth education, which both men pledge to continue. Wilder remarked, "Education has always been one of the most important pillars of Chanticleer's mission. I was the founding Director of Education for Chanticleer in 2000, and have experienced first hand the incredible impact that our ensemble has on students of all ages both here in the Bay Area and beyond. I look forward to partnering with Tim as we prepare to announce our new digital education initiatives in the coming weeks."

Keeler enthusiastically noted, "Chanticleer has been deeply involved in education and outreach for decades. We're in a unique position to bring world-class singing and choral music to schools around the country. I'm really excited to use my past experience in academia and education to help foster and excite a new generation of stellar ensemble singers."

How has this year's protests about racial justice and disparities concerning white privilege affected Chanticleer?

Keeler answered, "The societal awakening that has rocked America since May 25 is long overdue. As America's preeminent vocal ensemble, we have a duty to stand up for what we believe is right and to project that into our concerts and our interactions with our audiences. We've already made an effort to highlight more Black composers in our repertoire. For our Live from London program, for instance, we included a modern-day premiere of a motet by the Portuguese-African, 16th-century composer Vicente Lusitano." 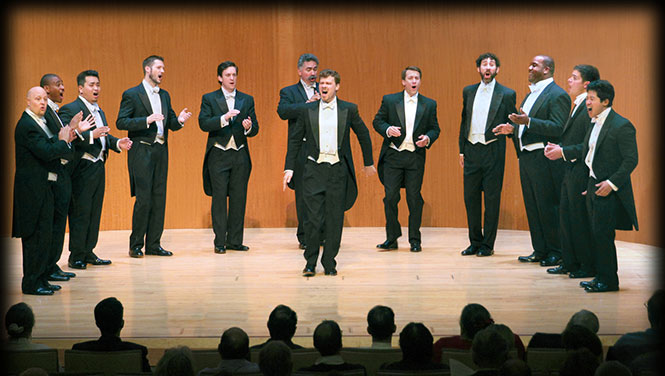 Chanticleer in a 2018 performance.

Keeler mentioned the significance of the virtual Live from London concert.

"Hosted by our friends in Voces8 (an English choral group) from across the pond, it's a way for some of the world's finest vocal ensembles to present their work online for our new, digital world. The whole festival comprises ten concerts, one every Saturday since back in August. We were the final group to perform in the festival, and our broadcast took place last Saturday, October 3. We had over 1,100 people watching live and hope many more will tune in. The concert is available to stream until the end of October (for a fee). The repertoire includes a brand new commission by one of our long-time collaborators, Steven Sametz, and also features original works by a former Chanticleer member, Matt Alber."

Music as shared experience
For its latest project, Chanticleer is sponsoring the Virtual All Aboard Gala on October 23. It will feature a sumptuous dinner delivered to your home by Carrie Dove Catering, a live auction, and a special performance by Chanticleer.
Wilder explains its purpose.

"The Virtual All Aboard Gala will provide Chanticleer fans from all over the world access to a free and exclusive performance by our ensemble, and the opportunity to support financially our singers during the pandemic. Typically, Chanticleer holds an in-person annual fundraiser in San Francisco.

"This year, we are moving to the digital format for this event, which will provide access to the ensemble to our global audience. It is an amazing opportunity for our fans around the world to gather in one place and time to support the ensemble in any way that they can."

The ensemble has recorded five pieces specifically for the gala and it will be the first time they are broadcast. 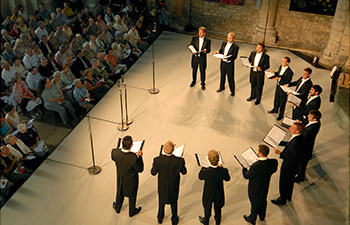 Chanticleer in performance at the Abbaye aux Dames, Saintes,

Created and led by the gay founder Louis Botto, the ensemble has never identified as gay, but most of its members through the decades were gay men. What is the role of Chanticleer in the queer community?

Wilder commented, "Chanticleer was founded in San Francisco in 1978, and definitely reflects that time in our great city in so many ways. The LGBTQ community figured prominently in our founding, and has continued to be represented in all parts of our organization and supporters.

"We lost our founder Louis Botto to AIDS in 1997, and recently interred his ashes at the beautiful new AIDS Memorial Grove in Golden Gate Park. Chanticleer has commissioned an enormous body of repertoire by LGBTQ composers over the years, and we continue to do so to this day."

Keeler added, "Everyone says music is a universal language. That's true no matter your gender identity or sexual orientation. Our goal is to make sure that everyone speaking that universal language gets a word in. We're committed to uplifting queer voices and continuing Chanticleer's legacy of inclusivity."

What does Chanticleer envision as its role during the pandemic? Keeler provides the ideal vocation goal for any arts group.

"Art is about connection," he said. "It's about sharing an experience. Ensemble singing, specifically, is a shared experience within the ensemble that we then share with our audience. That group and communal engagement is especially crucial in a world of social distancing. Our role during the pandemic is to find ways to connect people and capture a shared experience despite our physical separation."